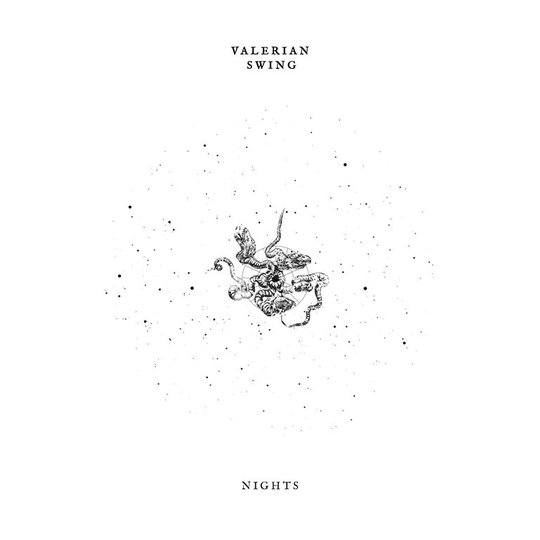 If we’re talking about ways to guarantee a divisive approach to winning over new fans, describing yourselves as 'three Italian lunatics playing mathy, violent, anthemic, and largely-instrumental songs' has got to be up there. For those willing to burrow past the blurb, however, Valerian Swing are a novel, ever-evolving treat waiting to be unwrapped.

Now on their fourth full-length album and firmly entrenched in Italy’s heavy music scene, 2017 saw the exit of bassist Alan Ferioli in favour of baritone guitarist Francesco Giovanetti, a line-up switcheroo which seems to have brought fresh courage to the outfit and heralded in a broader wind of change that’s seen a real stylistic shift. The proof, as they say, is in the pudding, and Nights certainly eats very well indeed.

Shedding the shackles of the ‘heavy’ bracket has proven a wise choice – as a band they sound leaner, the music more textured, the soundscapes more expansive and emotive than before. Unlike many of their contemporaries they never fall into the trap of utilising their impressive instrumentation incorrectly. Everything here is measured, sensible, tasteful – just the right amounts of grit, pathos and cold modernity rub shoulders with equal measures of lightness, malleability and analogue warmth.

The tumbling lead guitar line of ‘Four Horses’ is a fine example – a snippet of shred which accentuates a delicious, rolling, bluesy opening before spreading like a disease throughout the rest of the song into a sprawling, cosmic prog-a-thon. With that being said, Valerian Swing manage to do that rarest of things, treading a fine line between accessibility and improvisational playing with skill and grace.

The array of 'bleeps', 'sloops', 'wheeps', 'raooowwws' and 'blaows' on offer here is quite the smorgasbord of noise for a three piece, even for those beloved of pedal board set ups more complicated than local bus route timetables. ‘Five Walls’ is a masterclass in texture and depth, no doubt aided by producer Raffaele Marchetti, and mixed expertly by Matt Bayles. I don’t dare to imagine how many restless hours Bayles spent tearing his hair out listening to the mind-bending loops and layers that are threaded through the record.

Across the eight tracks, Nights is something of a musical journey, with the album’s mid-point really hotting up around ‘Six Feet’, a gypsy-jazz stomper that twirls and shifts through pitches and tempos. Somehow, it manages to be utterly charming and melodic to the point of what used to be referred to as toe-tapping, but might now be best described as a fucking belter.

Experimentation with computers, electronics and processed vocals have added several other strings to the band’s already complex bow and make for a compelling, intelligent and intriguing listen. David Ferretti’s drumming deserves special credit throughout – a master of the machine gun snare, adept at stumbling jazz breaks, and capable of battering seven shades of hell out of the kit when necessary. In the immortal words of The Fast Show’s Jazz Club host, Louis Balfour, “mmmm…nice”.

The album’s compositional highlight is hands-down the joyous, swollen, spiralling madness of the latter half of ‘Seven Cliffs’. Snippets of influence from Blondie and Arcade Fire build into a rampaging crescendo powered by one of the most elated sections of finger-tapped guitar in recent memory. If you’ve not got a dumb grin plastered across your face whilst manically thrashing various limbs around by this point in the record, then I would postulate that you can’t really call yourself a music fan.

Perhaps the best thing about Nights is the fact that it’s short, but oh so sweet. It’s not a self-indulgent record from a bunch of pretentious musos as most might expect. It’s a celebration of spontaneity, musical freedom and the acceptance that sometimes the simple things in life are the best. And sometimes the simple things in life are finger-tapping the living shit out of a guitar with your mates.