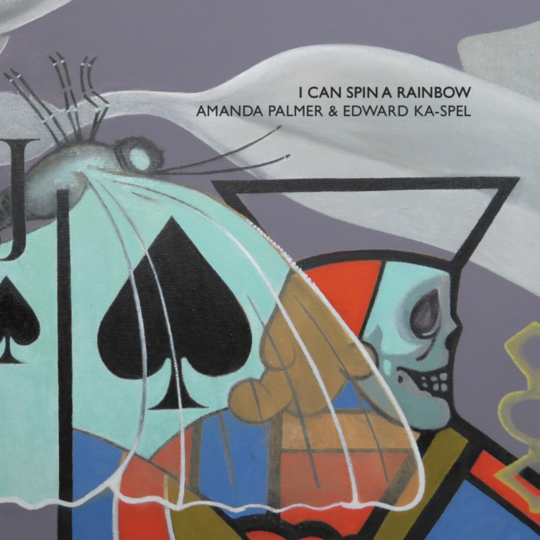 While their musical styles might not sound superficially similar (or even remotely related to each other), evidence of Amanda Palmer having been a fan of The Legendary Pink Dots since she was a teenager is present throughout her work if you know what to look for.

Her earlier records especially saw her using music to create fiction, myth and metaphor (culminating obviously in 2008’s Who Killed Amanda Palmer), as well as creating hardcore musical chaos, though acoustically rather than electronically (notably on Dresden Dolls tracks like ‘Girl Anachronism’, obvs). Thus it really shouldn't be a surprise that her and Edward Ka-Spel’s collaboration I Can Spin A Rainbow makes so much sense.

But not only does it make sense - fuck me, it sounds great. The sound for most of the album feels overwhelmingly Dots-ish, yet even on the most electronic tracks like opener ‘Pulp Fiction’ and ‘The Changing Room’ her presence is not only felt but seems to complete the sound perfectly, framing the explosion of colour and tingeing the edges in crimson. As a result, the stripped-back less-is-more tracks like ‘Shahla’s Missing Page’ and ‘The Clock At The End Of The Cage’ feel anything but out of place.

Each song tells its own story so intensely and so completely, like 11 musical horror novellas, that listening to any of them individually produces an experience more like that of listening to a shortish, intense, masterpiece-like album, especially as the songs often have a few different musical sections and ideas. The chord sequences are longer too than we’re used to from either artist, most notably in ‘The Shock Of Kontakt’, where the harmonic ascension takes almost impossibly long to resolve. Listening the whole album in one go can be quite an exhausting experience for that reason. However, seeing it as a collection of stories also means you can get just as much out of it listening to each musical horror novella as rhizomatic (treating all entry points as equal, as opposed to preferring the beginning. It’s a real thing.)

Neither before nor since Who Killed… has Palmer embraced horror-tragedy so completely in her music, and she certainly hasn’t fictionalised her work to this degree. Working collaboratively with Ka-Spel will of course have brought this to the foreground, for characters and stories playful (‘Prithee Liquidation Day’s whimsical Good Queen Regina), tragic (‘The Shock Of Kontakt’s Astrid, hopeless and consenting to her partner taking her for granted as they rob her of her life), and horrific (the eponymous Jack of Hands). The fictionalisation of ‘The Jack Of Hands’ makes for perhaps the most effective 'horror story' here, climaxing as its middle eight wrenches it from the realm of fiction into reality (TW: paedophilia) - this reveal is more than the face of the monster under the bed, but the face of a real, monstrous human beside it.

The horror as well as the sound itself of the whole album feels very...goth. But as Palmer herself has pointed out, that shouldn’t be as unexpected as we seem to think. And so, after a body of work quietly influenced by goth, Palmer’s tendency towards fiction, drama and indeed melodrama (not an insult, it’s what we’ve always loved about her) feel completely at home in this music. Goth becomes Amanda Palmer. And this collaboration, not at all random but in fact 25 years in the making, lives up to every terrifying, dark, colourful, excellent thing it could possibly be.