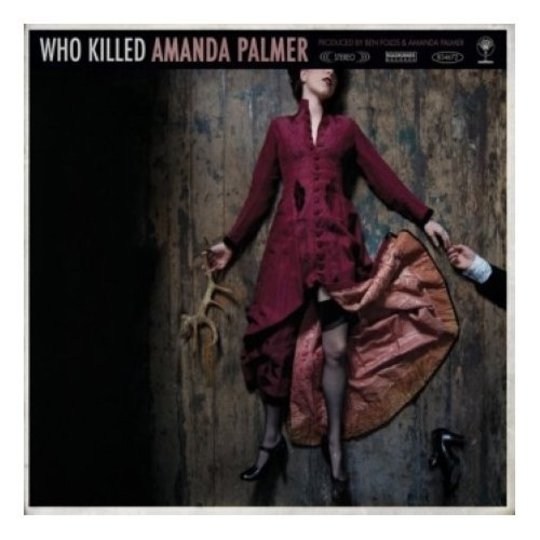 Apparently Amanda Palmer's main reason for choosing to dub The Dresden Dolls' music 'Brechtian punk cabaret' was so people would stop calling them goths. Which is pretty reasonable, though a cursory glance at a Dolls' concert crowd leaves it open to debate as to whether it made any difference or not. Funny thing is, whether that description was glib, cynical or deadly serious, she actually summed them up almost too perfectly. Palmer and Brian Viglione don't exist in a total stylistic straitjacket, but by and large The Dolls' music sounds exactly like the sum of the pair's parts: the Weimar Republic aesthetic, Palmer's violent ivory bashing, forceful but limited voice, lyrical preoccupation with herself and other fuck ups, and the dramatic backbone of Viglione's powerhouse drumming.

A limited palette is no bad thing, and certainly the Dolls' last proper album, Yes, Virginia... benefited from it; a tender, vicious, narcissistic but ultimately very focussed collection of kinetic oompah oompah and intelligent torch songs. But it's a tricksy formula to keep fresh, and though it's maybe unsporting to pick on May's No, Virginia... offcuts compilation, it really didn't feel vital, a bunch of solid, very Dresden Dolls-like songs that were kind of adrift of an actual point.

Four months on and Who Killed Amanda Palmer is in some way as much a piece of houseclearing as No, Virginia.... Some of the songs on this debut solo set are years old, almost all of them were being performed during her residency at last year's Edinburgh Fringe, and she's stated in interviews that this record essentially exists because she's got a surplus of slow songs not right for the dayjob.

Which is kind of underselling it as Who Killed Amanda Palmer is a very coherent album that feels like it has a life outside the Dolls, a pretty admirable feat considering how utterly Palmer defines that band. It's probably impossible to underestimate the import of indie's pianist in chief Ben Folds as co-producer and guest musician. Palmer is very noticeably no longer intent on battering her instrument into submission: tunes like the stately 'Ampersand' dreamily roll and surge on glittering, graceful musical tracks. Rarely does she use her percussive style as a drum substitute: instead the bombast is mostly imported - be it the swells of distortion offered by guesting Dead Kennedys' axeman East Bay Ray on 'Guitar Hero' or 'Leeds United''s fervent, brassy pound, which comes courtesy of the alarming-sounding The Born Again Horny Men Of Edinburgh.

Collaborating so promiscuously is an indulgence she's never allowed the Dolls, but it really does work – she even allows herself the luxury of strings for the opening 'Astronaut', which sweeps in on a mournful, melodramatic scythe of keys and cello, sad and massive, like a tidal wave at sunset. By contrast the lyric – about loving a dauntingly brilliant person – is intimate and unshowy. Like much of the record, it doesn't scream or sob in your face to see what your reaction is, as Dolls songs tend to.

Folds and his regular sidekick Jared Reynolds provide the extra push for the album's best track, dousing 'Oasis' in harmonies as warm and welcoming as a clear summer dawn. The jaunty pop song also offers the record's most provocative lyric, the story of a girl who gets raped but shrugs it off, the arrival of a signed picture of Liam'n'Noel serving as adequate compensation. There may be bitter irony there, but I hope it's not missing the point horribly to find it uplifting: to me it says something quite inspiring about the indestructibility of innocence.

Who Killed Amanda Palmer is a little too ballad heavy, and – 'Oasis' aside – most definitely loses its inventiveness and lightness of foot in the last third. Perhaps inevitably the fire and spark of a couple of Viglione-driven pounders would have helped, and probably the truth is the two of them do need each other to make their best music. But whatever the case, Palmer has made a record that sounds not like the latest from Brechtian punk cabaret's leading light, but the thoughtful debut from an invigorated artist, striking out from the valley of the Dolls.