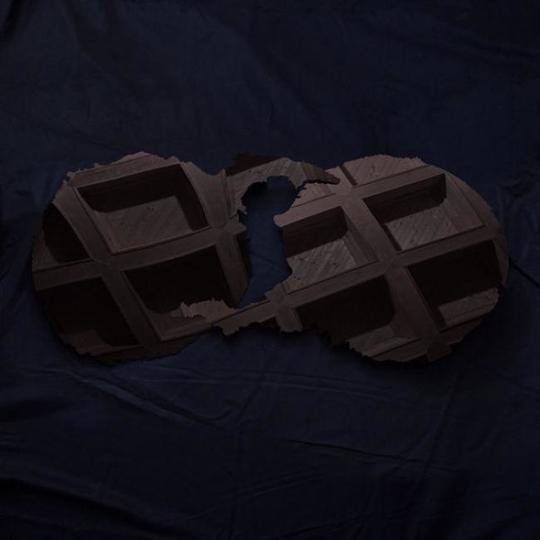 Dirty Projectors by Dirty Projectors is a break up record, about the end of the relationship between bandleader/dictator/technically-now-the-only-actual-member Dave Longstreth, and Amber Coffman, his longterm partner, guitarist and vocal foil.

It is also, I would suggest, a break up record about break up records, in which the boffinish Longstreth studiously filters the demise of the relationship through a variety of different lenses – musical and lyrical – out of pure intellectual curiousity.

“Complex plans and high ideals but he treats people poorly; is his ceaseless ambitiousness proxy for a void he’s ignoring?” an autotuned Longstreth sings on the nagging electronic throb of ‘Work Together’. And it’s honestly hard to work out what the answer is. Dirty Projectors is a record about a breakup, on which Longstreth says some occasionally quite brutal things about his own behaviour. But certainly there’s little concrete evidence for him being heartbroken, that this record is cathartic for him, as opposed to being an interesting project.

Oddly, it’s still far more relatable than anything 'the band' (here Longstreth plus a vast guestlist that includes Tyondai Braxton and Dawn Richards) has previously done, if only because it is, for once, so apparant what Longstreth is harping on about – Dirty Projectors have made some sublime music, but it's more usual to feel awed than invested. Opener ‘Keep Your Name’ is both the nearest and furthest to a 'classic' breakup song – a pretty, weary croon, presaged by a brief sample of wedding bells (a wedding organ sounds on final track ‘I See You’) and the album’s most mawkish line: “I don’t know why you abandoned me, you were my soul and my partner”. But his voice is harshly twisted and distorted, as if mocking the sentiments that he’s expressing, there is an (ironic?) sample of the “We don’t see eye to eye” line from 2012’s ‘Impregnable Question’, and before too long the mournful, sedate tone has given way to, of all things, a rap segment on which Longstreth gets increasingly incensed, eventually spitting “your heart is saying clothing line, my body is saying Naomi Klein… what I want from art is truth, what you want is fame".

Pretty douchey, right? I mean, yes, but it’s not like Longstreth doesn’t know that, and his songwriting mode changes as soon as we hit the next song, ‘Death Spiral’, a stabbing electro number that dramatises the awful, joyless end to the relationship with a solid amount of self-blame (“I never learned to let you breathe, Condescended relentlessly”).

Then the lengthy album centrepiece ‘Up In Hudson’ provides a sunny look back to the start of the relationship – “The first time ever I saw your face, laid my eyes on you Was the Bowery Ballroom stage,  And I knew that I had to get to know you” – even as it’s intercut with the foreshadowing chorus: “Love will burn out Love will just fade away”.

Getting an exact grip on Longstreth’s feelings is difficult, though it certainly seems reasonable to assume that his and Coffman’s breakup was a dragged out, traumatic experience. Is he sad now? Dunno.

There is, inevitably, something slightly disquieting about a man singing about his female ex-partner in withering tones that occasionally carry with them the faintest whiff of emotional abuse: on the downbeat, percussive ‘Winner Takes Nothing’ he sings of his ex – “you’re shining life fifteen of fame” and “As much as I'd like to say I'm grateful for the experience, that we've grown together and bettered each other and built the city with one another, the truth is you'd sell out the waterfront for condos and malls_”.

The repeated inference is that Coffman was shallow and materialistic and Longstreth a sensitive artist, which is kind of a gross cliché to publicly lay on somebody to begin with. And what do we know about the truth behind his breezy put-downs? Maybe Coffman was just concerned about financial stability as the pair headed deeper into their thirties. Certainly her Twitter feed speaks of little more sinister than a passionate support for leftwing causes. And yet to view the record's harshest lines as simple evidence of Longstreth’s douche maleness is to ignore the stew of observations, the descriptions of the good times and the owning up to being a dick, the fact that the album is less concerned with blame than trying to replicate the queasy sense of a relationship on its last, tortured legs. There is the worry Coffman might make some future statement that would problematise things, but for now I feel fairly happy that Longstreth is deliberately trying to paint himself as a bit of a wang.

To what end, though? I’m pretty sure it’s not guilt. A detached interest in his own behaviour? Probably. But also it’s clear from his use of beats and autotune, the namecheck for Kanye, that he’s as much dabbling with the palette of other breakup albums – notably 808s & Heartbreak – as he is in simply letting his pain pour out down the path of least resistance. Compared to say, Blood on the Tracks or perhaps the more closely equivalent Hissing Fauna are You the Destroyer? it is not obviously a record that feels like its creator made it for his mental health – more that he looked at the mess of his life and saw a great new concept. And that is absolutely fine, I think: an acoustic album about how sad he feels would be a much stranger move for Dirty Projectors. The record works not because it feels cynical, but because beneath the obvious lyrical headlines, you can sense Longstreth’s genuine enthusiasm for the new forms he’s exploring so vigorously. The record’s most stunning moment isn’t anything Longstreth says, but the lengthy outro to ‘Up In Hudson’, a thrilling passage of pounding percussion and burning feedback that feels like love of music is its only guiding factor.