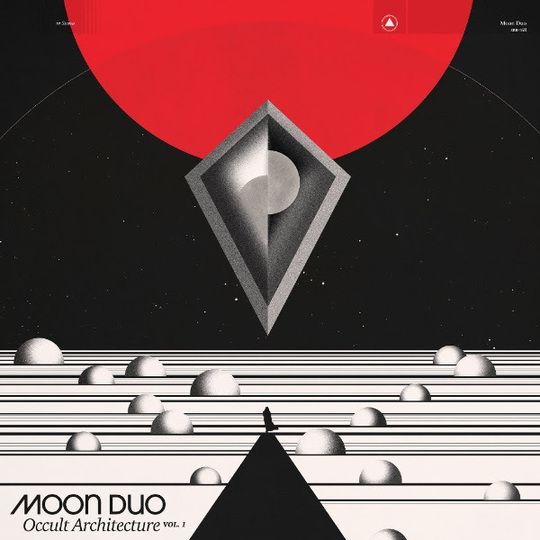 Few bands do hypnotic quite like Moon Duo. For eight years now, the Portland, Oregon twosome have stretched their fevered psych-rock aesthetic to the outer recesses of perceived reality, perforating the largely self-contained realm of the genre by way of opting for cultivated esotericism over Spartan progression. Their fourth studio album, Occult Architecture Vol. 1, sees singer-guitarist Ripley Johnson and singer-keyboardist Sanae Yamada level up a bardo or two on their voyage to the far beyond.

The first in a projected two-part release, Occult Architecture Vol. 1 is – as it title comfortably suggests – a meditation on the synthesis of arcane exterior influence with methodical, human machination. Stemming from the 'hidden energies of rainclouds and sunshine and the deep creep of Northwest forests along with their effect on the psyche', it’s a release intrinsically rooted in the potent sway of the natural world and the hidden processes that bind it all together. Like holding a prism up to the last burning rays of the dying sun, Moon Duo re-present their reverb-heavy psych miasma as a feature-length prayer to the cycle of the seasons and the route of day into night; dark into light.

A band that have always intuitively embraced the idea that minimalism is akin to maximalism, here Moon Duo take Peter Kember of Spacemen 3's shrewd mantra of 'Three chords good, two chords better, one chord best', douse it in a brume of fuzz-soaked textures and spooked synths before sending it on its way via a steady heft of hypnotic electro-acoustic beats courtesy of the band's regular tour drummer John Jeffrey. From opener ‘The Death Set’ – a blissed-out opening gambit emboldened with fist-clenched, Numanesque swagger – and lead single ‘Creepin’’ to masterfully foreboding highlight ‘Cross-Town Fade’ and slow-burning, ten-minute flame-out ‘White Rose’, layered permutations and Johnson’s oracular incantations – largely inspired by the writing of Mary Anne Atwood, Aleister Crowley, Colin Wilson, and Manly P. Hall – meld to form a nebulous dimension where glorious repetition sits at the root of it all. As with its predecessor, 2015’s Shadow of the Sun, the almost imperceptible shifts aligned here are real testament to the deceptive complexity of Moon Duo’s process.

With its counterpart set for release later in the year, Vol. 1 represents the 'Yin' – the dark energy, the winter – of the duality being tackled here. And sure enough, with tracks like ‘Cold Fear’, ‘Cult of Moloch’ and ‘Will of the Devil’ coursing forth with a squall of dreaded tones and harbingering lyrical refrains, this is a record that, rather than personifying the expectant inner surge that accompanies daybreak (that’ll surely be left to Vol. 2) yields to the dark energy of a transporting, heavy dusk. And viewed through the lens of an increasingly precarious natural world, not least in recent legislative attempts to quell the advances of necessary environmentalism, Occult Architecture Vol. 1 makes for a sorcerous entreaty to dig that little bit deeper when weighing up the relationship – and clearly quite inspiring power – of the inner world and the outer realm. Here’s hoping the second installment delivers just as forcefully.