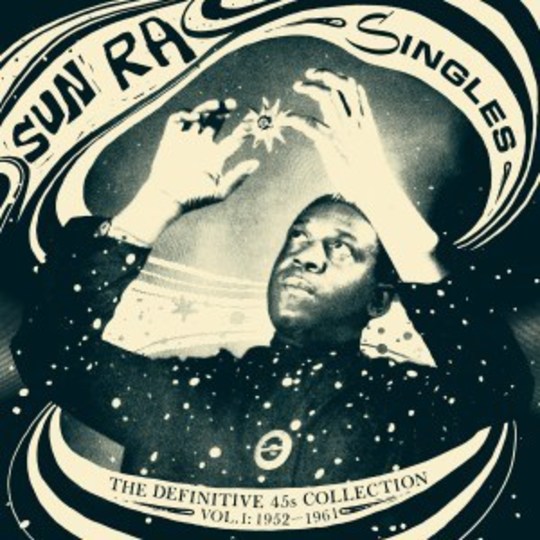 A compilation can only be as good as the artist(s) within it. This is incredible. By compiling all the known 45s Sun Ra released, this three-disc-set (a limited edition series of 10 45-inch reprints will also be available in 2017) gives as good a collection as is possible from which to explore the development of Sun Ra’s seemingly endless universe of music. Singles is gloriously extensive, bizarre, diverse and cerebral - these same qualities also mean the collection is directionless, of nowhere, of anywhere… of space. This vastness is the essence of Sun Ra – it’s a head fuck in the best possible way.

It's intriguing to hear his more conventional compositions, which predominantly roll out across disc one and in part into disc two. Although that said disc one opens with the alien ‘I Am An Instrument’ and ‘I Am Strange’; the former, right now, feels like a musical example of the futility of history as his spoken words of “I am strange/I choose love over hate” highlights our current political backwardness. Sigh.

Tracks like ‘Chicago USA’, ‘A Foggy Day’ and ‘Daddy’s Gonna Tell You No Lie’ (in all of these Sun Ra’s Arkestra is the backing band) would be at home on a Greatest Doo Wop comp, or as (very weak) additions to Birth of the Cool. What these tracks show, as well as being historical artefacts, is that Sun Ra was a competent band leader that thrived space become the topic. In these songs the music similarly takes off, although there are squawking brass moments that clearly delighted and influenced the Residents to no end in some of the more straight-up numbers, as in ‘Super Blonde’.

As the discs unfurl it really starts to become a tastier offering. A slicker, studio recorded version of ‘Daddy’s Gonna Tell You No Lie’ dazzles in zoot suit Technicolor, and makes you wish you had both the original disc-one bedroom recording and this version. It awakens the obsessive music fanatic within, and rousing from hibernation is always a wonderful feeling.

‘October’ drapes itself across its four-and-a-half minutes like a death march. Staggered brass parts layer up a sense of doom under the lead trumpet, which struts drunkenly. This could be the sound of down-trodden America or the sound of trepidation - some last moments on earth before ignition. It’s the sound of smog be it on earth or in space.

As songs like ‘Song To Earthman’ enter the listing and Ra starts ranting over big-bands of despair then the power of these compositions becomes undeniable. ‘Song To Earthman’ is a space journey delivered as sermons to overcome the frailty of the human condition: “Mike Mike Mike/Stop abusing that spike/Coz it takes away your might.”

A compilation like this is a perfect because it offers a thousand plus interpretations, swings stylistically with abandon and highlights how, while Sun Ra is revered for his ephemeral ruminations in music, he really did play with the conventions of the hustling house jazz band.

What’s missing… is the propulsion of his albums. There’s no fluidity here in the way Space is the Place so majestically catapults through jazz in a way even Ornette Coleman or an angry John Coltrane couldn’t. Disc three includes a version of ‘Rocket Number 9’ that plods mechanically; that’s not to say it's inferior to the Space Is The Place album version (it may well actually be funkier), but it sure as hell doesn’t enthral in the same way.

An artist such as Sun Ra, whose every output was so relentless (especially in the Fifties) and rich in meaning and composition, can be overwhelming to engage with in such an in depth format. It’s exhausting. And while collecting and devouring his albums is probably a more satisfying journey, to be delivered this trove of Fifties big band funk and perverted doo-wop, and to see it spiral out into interstellar space-jams in a stop-motion fashion is a huge thrill. Singles provides the first opportunity for an audience to extensively track Sun Ra’s evolution from prolific band leader into interstellar cult leader, and it's quite the ride.