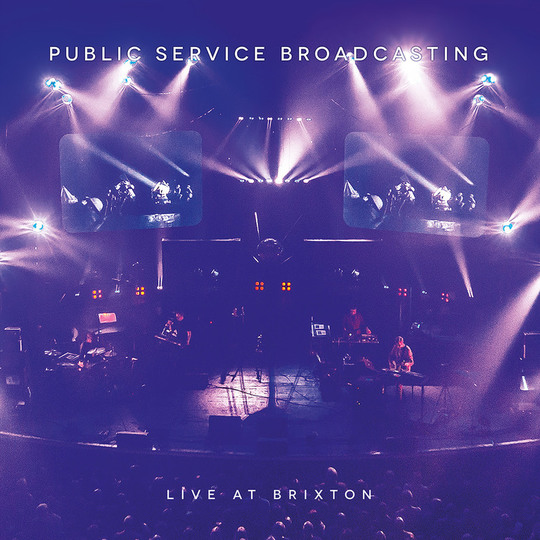 A live album doesn’t tend to be high on the wish list of anyone but the keenest of fans. It’s a good go-to at Christmas, or when you’ve worn scratches into all your much-loved studio albums. But nonetheless there comes a time when most self-respecting bands think – is it time?

And for Public Service Broadcasting that seminal moment came on 29 November 2015. At their favourite local venue, Brixton Academy, to a sold-out crowd on the Race for Space tour, the magic took place. An initially sceptical frontman J. Willgoose, Esq. admitted 'I was persuaded… by both the reaction on the night - which was overwhelming - and of those who watched the stream as it went out live, that something special had occurred and it truly was worth documenting'.

There are plenty of bands who’ve shuffled down the live album release alleyway only to be tripped up by their own poor quality recording equipment/unenthusiastic crowd/unforgiving failure of spark onstage. Take The Beatles Live At The Hollywood Bowl, for example. And Public Service Broadcasting with their heavy focus on visuals (courtesy of Mr. B) and detail-driven layering of samples don’t necessarily lend themselves to this format.

But this double LP/CD PBS – Live at Brixton release isn’t of just any old gig. Because this gig featured arena-level production, a 13-piece choir, a five-piece string section, expanded brass section, dancers, pyrotechnics, the Smoke Fairies guesting on ‘Valentina’, and plenty more besides. Oh, and you’ll get a DVD with an audio commentary from the band plus bonus features. That’s a stocking filler if ever I heard of one. But to the music. With their Race For Space album standing apart from the band’s previous releases, both in the maturity of its sound and the absorbing flights of narrative, there are plenty of tracks to look forward to. The opening, John F Kennedy’s renowned “we choose to go to the moon” speech sets the tone: a balance between the near-studio quality, and the echoing anticipation of near-5,000 eager gig-goers.

The set-list is a sprawling interweavement of new and older material. Wrigglesworth and J Willgoose esq take their time, lengthening out some of their songs, paring back and experimenting with tone and texture. The richness of the instrumentals gives a warmth that enhances the hypnotising quality of tracks such as ‘E.V.A’ and ‘If War Should Come’. Interspersing these with energetic interludes from the likes of ‘Signal 30’ and ‘Theme from PSB’, the band curate an evening of dynamic ebbs and flows that can be sensed even from the comfort of the sofa.

It’s unfortunate, then, that PSB’s communication method of choice in-between songs is a set of pre-recorded audio snippets aimed to address the crowd and presumably make everyone chuckle. The slapstick style jars with the grandeur of the subject material and simply doesn’t translate into the recorded world. Just speak into the mic or, better yet, don’t say anything at all. Because for many of the songs we’re transported into another time somewhere in a NASA control room as Apollo missions perform feats previously unimagined. In ‘The Other Side’ the bated-breath anticipation in the crowd is palpable, and the successful mission creates a stereo effect of euphoria spanning 50 years and 4,747 miles between Houston and Brixton.

From this point on, the last four tracks are all firm favourites, the climax is boisterous as the crowd shout along to ‘Go!’, and you can literally (metaphorically) hear the cosmonauts dancing on ‘Gagarin’. Ending on arguably their best song, ‘Everest’, PSB show the musical prowess of a band giving themselves space for creativity, perfectly complimented by the live brass and string sounds. Why not end on a Race For Space track? It shows that even when brought back down to earth, human achievements are astounding. And, if live recordings are your bag, the albums about them aren’t so bad either.