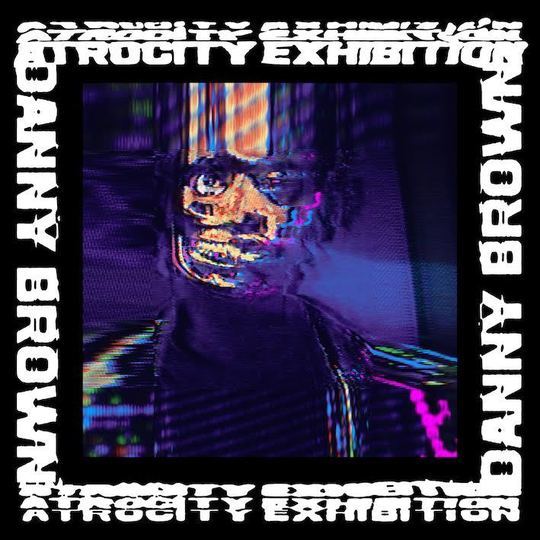 'The human organism is an atrocity exhibition at which he is an unwilling spectator'. So wrote J.G. Ballard in his aptly titled 1970 novel The Atrocity Exhibition. Ballard was particularly obsessed with the way that the urban environment has affected our way of thinking. In fact, the term Ballardian describes something reminiscent of 'dystopian modernity, bleak man-made landscapes, and the psychological effects of technological, social or environmental developments'.

This seems to apply perfectly to the rapper Danny Brown whose descriptions of the ghettoes of post-industrial Detroit are littered with the products of these environs: drug users, drug dealers, gang members and prostitutes. Ghettoes themselves are clearly a form of dystopian modernity; systemic racism solidified into cheap public housing. According to the American Center for Disease Control, over 30 percent of those growing up in the inner-city suffer from PTSD. Alongside rappers Kendrick Lamar and Vince Staples, Brown has been a vivid chronicler of the psychological effects of living in the neglected inner-city ghettoes and the desperate things done to survive. Brown's lyrics generally deal with one of three things: growing up in Detroit (dealing drugs, stealing, cold weather); how these experiences still haunt his psyche; how he uses drugs to escape these horrors.

'The Downward Spiral' starts the album off with Brown describing a hermetic drug-dependent existence over a queasy beat. Brown's decision to start the album with this track is representative of the scene he's trying to set. The album generally follows its dark, yet psychedelic, path while largely avoiding the trap bangers of Old's second half. This isn't to say that the album entirely resembles Old's meditative first half though. Tracks like 'Dance In The Water' and 'Ain't It Funny' find a way to be up-tempo ragers while simultaneously representing Brown's eccentricities.

Brown is, as he has said once (in a line borrowed from A$AP Rocky), a "hipster by heart but ... can tell you how the streets feel". This line seems more appropriate to Brown than Rocky. Brown is rarely seen out of skinny jeans while he counts himself as a huge fan of indie-fave Sufjan Stevens and Sixties psych band Love. Through these influences, he is both deeply in the rap world and constantly looking outside of it. This has led to one of Brown's real strengths, his ear for beats and producers. He frequently works with people who take a heavy influence from hip-hop but exist just outside the hip-hop world proper. In the past he's worked with Purity Ring, Rustie and grime producer Darq E Freaker, amongst others. Crucial to this album is the increased focus on longtime producer Paul White who produces the majority of the tracks here. In White, Brown has a brilliant sparring partner; his beats are just as idiosyncratic as Brown's voice itself. The two of them together seem to be working on being the rap-game David Lynch and Angelo Badalamenti.

Atrocity Exhibition isn't quite as breathtakingly brilliant as XXX was and will probably alienate some of the fans that Old gained him, but it's basically just a good Danny Brown album. This album also works as another jewel in the catalogue of Warp Records 2.0, a phase that I think is just as significant as the IDM records they released in the Nineties. Brown's work makes conceptual sense alongside boundary pushing artists like Oneohtrix Point Never, Flying Lotus and, obviously, Rustie. Actually featured on this album are two of its new signees, R&B singer Kelela and industrial hip-hop producer Evian Christ (who both make incredible contributions).

Brown's choice of the title Atrocity Exhibition is ideal for many reasons. Obviously it's a great Joy Division song (one that makes the album's experimental nature obvious) but I also have a strong feeling that JG Ballard and Brown would probably have gotten on: they both deal almost exclusively in extremities of the human condition particularly violence, sex and trauma. Brown actually seeks to explore and expose his humanity as the atrocity exhibition it is. Listening to his songs we hear both the high and the comedown as he frankly discusses his need for transcendence from the difficulties of his real-life situation