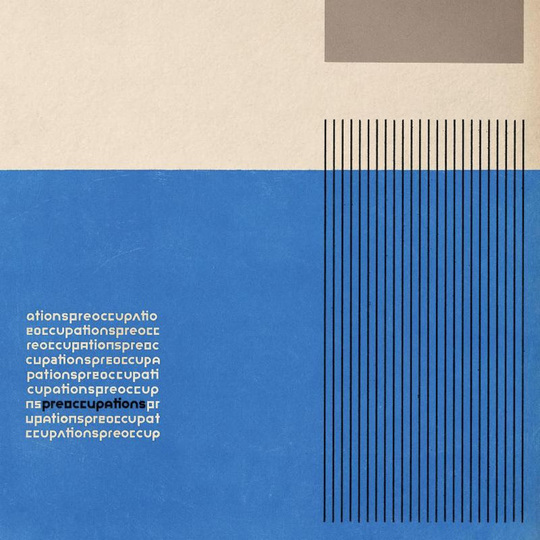 What’s in a name? Canadian indie survivors Preoccupations were famously called Viet Cong until quite recently; whether or not you think this was egregiously offensive (if you’re not Vietnamese I suppose it’s not really your shout), the fact that a small-ish guitar act were starting to get bumped from bills over a title they admitted to not being ideologically invested in meant that a change was probably wise.

The successor band to the brilliant, inscrutable Women, Preoccupations is the second new name since 2012 for singer-bassist Matt Flegel and drummer Mike Wallace. Clearly, though, this one is not intended as a break with the past: the lineup has stayed stable and recent sets are still stuffed with songs from the self-titled Viet Cong album.

So the weird thing about what I suppose you’d call Preoccupations’ self-titled debut is how unlike Viet Cong it sounds (fun fact: Women’s Public Strain is the only non-self-titled album of Flegel and Wallace’s career). Not suspiciously different: loosely speaking Viet Cong and Preoccupations both play heavy, post-punk-indebted rock. But certainly surprisingly different. Flegel’s vocals are the real shocker: they often sound unrecognisably different to those on Viet Cong and the two Women albums, a deep, tired growl, his old treated yelp only occasionally really emerging on second track 'Monotony'. The thunderous, processed drums of Viet Cong are largely shelved in favour of something dancier, closer to Stephen Morris. The early works of New Order and The Cure loom far larger than they did before.

Is any of this important? A lot of bands change between records. I suppose the interesting thing about Women/Viet Cong/Preoccupations is the extent to which they wantonly shun notions of music as an expression of personality: for all the undoubted passion that flows though it, their work never really seems to be about them, or indeed about anything in particular other than abstract, elemental feeling. Flegel and Wallace have made four full-length albums, and their music has told us nothing about them. They don’t seem ideologically attached to their name and don’t seem ideologically attached to any musical identity: if most bands seek to either achieve continuity or pointedly reinvent themselves, Preoccupations seem to have almost casually broken away from Viet Cong: there is no sense of band-as-brand.

It’s all a bit disarming at first, not least because it's hard to have any sense of whether Preoccupations are fucking with you. Opener 'Anxiety' begins with over a minute of ambient chiming before Flegel enters with a throbbing bassline and his sepulchral 'new' voice: is he messing with out expectations after the thunderous Viet Cong? Or does he just think it's a neat way to start a song. "I was living in a vacuum, deteriorating to great acclaim" he rumbles, inscrutably, over gothy synths and the hiss and crunch of guitar-wrought static.

The track that really rings the changes is 'Memory', which is almost exactly the same length – 11-and-a-bit-minutes – as Viet Cong's apocalyptic closer 'Death', but genuinely sounds like a different band: a tense, aqueous build with Flegel ominously muttering about how "you don't have to say sorry for all the things you failed to do" folds in on itself and turns into a jaw-dropping dreampop ballad that the singer croons over gorgeously and indecipherably, before the whole thing messes with you somewhat by ending in an ambient wash reminiscent of Weird Era-era Deerhunter. It is a completely beautiful song and also utterly baffling, the most emblematic song on Preoccupations that also sounds like nothing else on the record.

If there is something close to a standard song it's on the likes of 'Zodiac' or 'Degraded', which combine Pornography-esque synths, raw Joy Division bass and nimble New Order drums. And yet the band transcend their obvious influences: the recording is far heavier and denser than anything they're referencing, the songs more abstract and feral, the vocals surging with an unknowable American passion that sets them apart from their Brit influence. It is a strange and potent cocktail that only yields anything close to an actual pop song on soaring closer 'Fever'.

Eight years since these musicians came into my life as Women, and I don't feel like I really understand anything about them. And that's what keeps drawing me back.