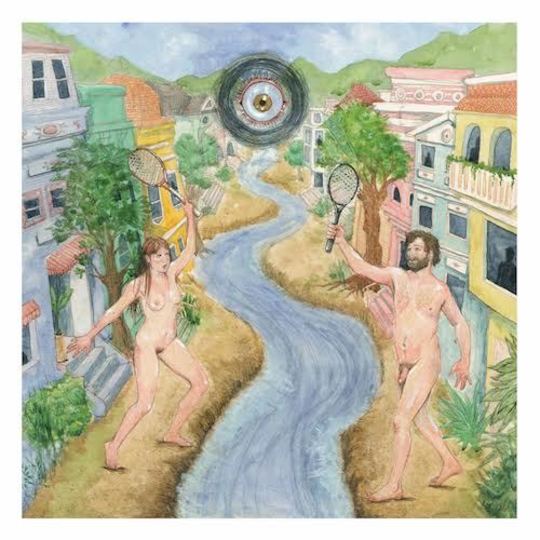 Cool Ghouls return, and this time they have a fire in their collective bellies.

When listen to the San Francisco band, it’s hard not to think of The Grateful Dead, Jefferson Airplane and a whole slew of Nuggets mainstays. But don’t be fooled, they're not just tapping in to the past because it’s trending. Oh no, Cool Ghouls believe in their sound and songs, as their psych forbearers did. On third album Animal Races they channel the past, but give it a contemporary twist.

Speaking of their home city, frontman Pat McDonald recently said 'San Francisco has always been great and hopefully always will be but these days there are things we despise. The lifestyle The Bay once afforded artists has been decimated. This gold-rush of the tech industry is forcing prices up and it’s been a flood of bullshit. Some people are being forcibly displaced, others are disheartened and leave by choice. Our song "Never You Mind" is a reminder to the creative community not to roll over. San Francisco isn't dead until you let it die in your heart.' So it appears that on Animals Races, Cool Ghouls have come out fighting.

Title track ‘Animal Races’ gets everything going with chugging rhythms and stuttering solos, before McDonald sings “I got a hand in my back pocket always hidden from my view, Ask a question and be rewarded with the things it takes from you”. If you knew nothing about the band you could be forgiven for thinking it was recorded anytime in the past 30-to-60 years. When McDonald sings “I’m awake and watching something, paid by people not in view. Sifting through pages of history, people win and people lose. And the race is on , and it goes, and it goes and it rolls, and it rolls for the animal races” again you’d be forgiven for thinking this is a protest song against war, rather than against gentrification and big business. This is what Cool Ghouls do best. ‘Sundial’ is four minutes of euphoric garage pop. Massive melodies jostle with harmonies for your attention all the while the guitars blind you like the midday sun.

‘When You Were Gone’ is a tender slow burner that deals with themes of death and loss. Musically there are neo-country elements running through it giving it a melancholy tinge. The lyrics offer a positive message however so the whole thing doesn’t feel like a massive bummer. “When I see the demons before I fall asleep, Standing in my room, staring right at me, I am not afraid, I know I’m alive” gives the song a euphoric lift and helps end it on a blissful note. Standout track ‘Days’ opens a rhythmic strum of an acoustic guitar before a piano and drums kick in. Imagine a slowed down version of the Velvet Underground's 'I'm Waiting for the Man', but with a slight Northern Soul vibe. As the music slowly meanders and chugs along, guitarist Pat Thomas's lyrics get more scathing and biting. “Another day, same as before, and the morning through your window, sheds no light on your door. What’s the use when all you get are days, another gone, another coming yet”.

The album closes with ‘Spectator’. This final slab of jaunty high-tempo summery indie-psych ends with the words “Where jealousy may creep in, may righteousness be by your side. Where envy may hold the ones you once held dear, may you be grateful for their time”. This feels like a fitting way to end. Cool Ghouls offer a nugget of positivity wrapped up in glorious Technicolor harmonies. This is what the album is about. It’s about staying positive when everything around you isn’t. It’s about not giving up, and it’s about having a good time while you can. But ultimately it’s a response to sugary summer pop songs that won’t keep you warm then the sun goes down.

Life on the Road