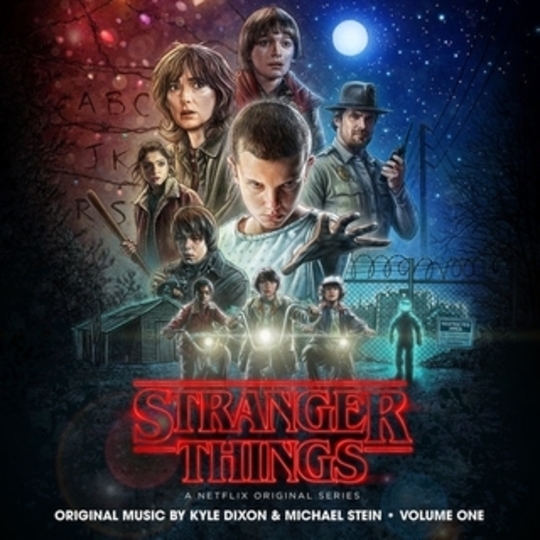 If you have clicked onto this without having watched Netflix's hit tv series Stranger Things then what the hell are you doing here? Go watch it! It is a phenomenal piece of film-making which pays very heavy lip-service to some of the best films of the Eighties while presented from a postmodern 2016 lense. It manages to be distinctly familiar and original at the same time in its style and presentation, while the characters and child-actors especially are superbly crafted.

One of the most notable aspects of the show, which many viewers have reflected upon, is its soundtrack. Composed by Kyle Dixon and Michael Stein, two members of the synth-wave four-piece S U R V I V E who appear to be relatively unknown on this side of the Atlantic at least, they were commissioned by the directing Duffer Brothers, as they were fans, once the show was picked up by Netflix.

What is remarkable, and clearly something the Duffers keenly saw in their approaching of the Austin, Texas, quartet, is that the soundtrack manages to convey the exact feeling the direction and editing of the show manages to pull off; the aforementioned post-modern look at Eighties smalltown America. Some clear anachronisms aside, the show does the perfect job of placing the viewer in the world of sleepy Hawkins, Indiana in 1983 while playing ode to such classics as E.T, The Goonies, Alien, Halloween, The Thing and The Shining (amongst others) while still managing to carve an original tale out of an already well-worn genre of Eighties sci-fi/horror.

Indeed, even outside of the show's original soundtrack, it makes great use of Joy Division's 'Atmosphere', The Clash's 'Should I Stay or Should I Go?' reminding one of Donnie Darko and Peter Gabriel's stunning cover of David Bowie's 'Heroes' (something I didn't think would ever be possible) which manages to be consistent with the show's tone despite being recorded in 2010 - The Smiths also get a mention despite releasing their first record in 1984, making them particularly tuned in kids in Hawkins, Indiana.

However, the original soundtrack is where the real detail lies. It is full of gorgeous compositions and details, blending Eighties-inspired synths that range from the luscious to the eerie. Dixon and Stein have managed to create a soundtrack befitting a show paying obvious homage to the Eighties while remaining an original piece. Like the show, the soundtrack is familiar yet excitingly new. It feels plucked from one of John Carpenter's many excellent scores or the Italo-horror soundtracks, which Broadcast explored in the Berberian Sound Studio OST, which also melded with Italo-disco of the late Seventies and early Eighties.

Even without the context of watching Stranger Things, it is an extraordinary piece of music. The title-sequence and opening title track in an instantly recognisable piece that, as the show continues, will continue to burn into the popular conscious's mind. Moods can seamlessly move in the blink of the eye, such as the Pantha du Prince reminiscent bell-twinkling 'Hawkins' straight to the unnerving 'The Upside Down' which are two of the only "fully-formed" tracks on the whole OST. Yet even in soundtrack's inherent nature of short pieces of incidental music, Stranger Things Vol 1 manages to feel like a complete record in its own right, such is the consistent, creeping mood of the overall soundtrack.

At 36 tracks and over an hour long, Stranger Things Vol 1 can be an intimidating task at first listen, and with a second, even longer volume on the way, we're only scratching the surface of this alien world. However, the soundtrack moves through pieces and moods at such a seamless rate, the listener forgets about all those details and settles in for an hour of music which can be moving, transcendent, invigorating and relaxing all in a matter of minutes. As if floating in an isolation tank, like the show's small ode to Johnathan Glazer's incredible Under the Skin (and Mica Levi's equally impressive soundtrack), it is truly possible to just get lost in the Stranger Things universe through it's soundtrack, whether you have the visuals to back it up or not. Such is this excellent ode to Eighties synthesised scores, as the show is to Eighties TV and Film, the imagery and moods can be reached from the music alone.