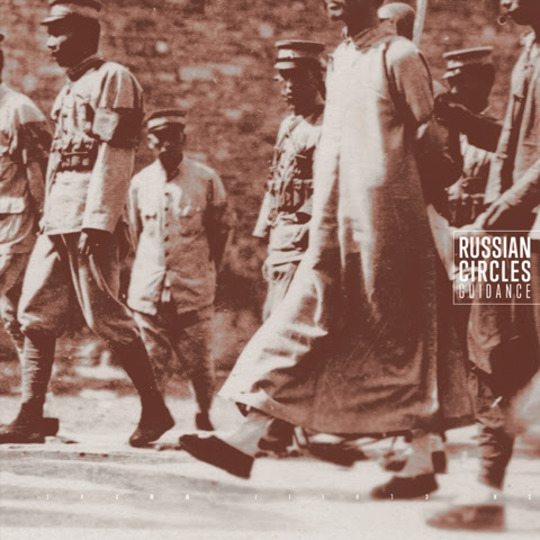 On their latest release Russian Circles manage what many often think is impossible for an instrumental band: to be all things to all people and successfully communicate a veritable slew of emotions and moods without a shred of vocal or lyric. Long hailed as masters of their particular brand of thick, swollen, metal-infused post-rock that often threatens - to quote the marvellous recent viral video of retired American football star Marshawn Lynch - to 'run through a mu’fucka face' Guidance finds them on stunning form.

This is a record that opens up like an old wound, grows and splits like diving cells in a petri dish, unfurls into ever grander and further spiralling madness as it pushes and pulls against itself creating pockets of darkness that the sparse trappings of melody fall helplessly into. ‘Asa’ blooms like a flower into the irresistible vortex of ‘Vorel’ that immediately presents a more familiar Circles feel – palm muted breakdowns and notes that hang in the air like the executioners axe – this is bloody, thrilling stuff, a death march for the twenty-first century.

Musically linked, as it is, the flow from track to track is part of what makes the album such an immersive listen, a perfectly executed recreation of their crushing and sensory-overwhelming live performances that’s been expertly captured on tape by producer Kurt Ballou, perhaps best known as the guitarist of US metalcore band Converge, at God City Studios.

‘Mota’ is a great example of the Janus-like dichotomy that Russian Circles can present. Beginning with a hopeful theme that carries echoes of Sigur Ros in its nature-inspired opening, it becomes tainted and infected by a melancholy bleakness, evocative of the gradual destruction and depletion of our planet’s natural resources. In fact, the entire album at times feels like a warning from the future, a post-apocalyptic hymn that spontaneously combusts into life without notice, turning on a penny with the changing tides in the music. A quick Google in an attempt to dig out any hidden meaning in the song titles illustrates what’s so important and alluring about instrumental music; it’s easier than ever to make your own interpretation of the tones, textures and emotions that are being communicated. Whether ‘Mota’ is slang for weed or a reference to a company providing drones, augmented reality and innovative consumer electronics, or something else entirely, doesn’t really matter – in fact all options seem equally appealing as a metaphor for the sluggish, lurching chaos of the track. Make of it what you will.

There’s one moment on Guidance which genuinely sends chills down the spine, and it’s the exhausting climax of ‘Afrika’ - a fist in the air anthem for a much needed revolution in thinking, a renaissance which Russian Circles seem increasingly keen to usher in with their own particular brand of cybernetic, digitally enhanced, progressive rock music.

Guidance is a masterpiece in the art of emotional communication through musicianship, an album which ultimately, despite its darkness, serves to inspire and uplift – a true reflection of the human experience.