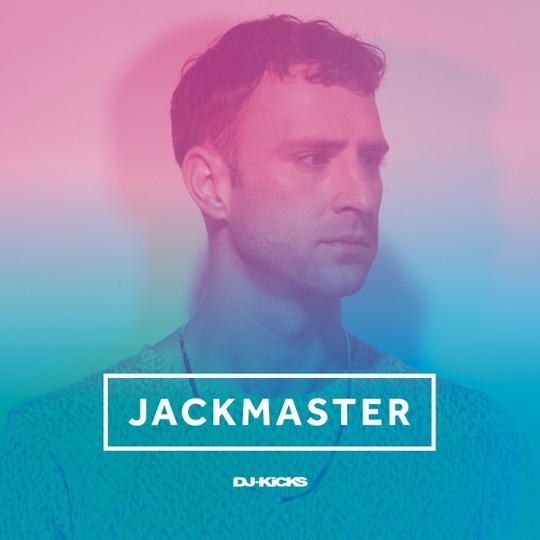 It's strange: a few weeks before it was in fact announced I was really hoping that Jackmaster would be asked to do a DJ-Kicks mix (the universe is finally listening to me). The man is still responsible for probably the best DJ set I've ever seen. As part of his residency at London club XOYO Jack Revill played an all-night set that flawlessly tied together the expected house and techno with Prince (lots of Prince), a brass band cover of Sean Paul and a fantastic use of The Arctic Monkeys 'Do I Wanna Know'. Jack's versatility, however, never comes across as a gimmick. In a world where house and techno seem to get less fun by the day, Jackmaster is a breath of fresh air. Some DJs state their aim as giving people a 'dance music history lesson' and end up playing sets that are exactly as boring as that sounds; with Jack this is never the case. While he has a clear love for obscure house and techno, he never comes across as a snob especially with his brazenly cheesy Tweak-A-Holic nights which include basically anything 'Eighties'. His stupendously geeky record knowledge never feels like an academic exercise but something that comes from an absolute love of music. This is a man who loves Ricardo Villalobos and Chaka Khan equally.

This is Jack's second commercially released mix after 2011's essential Fabriclive 57. Since that name-making mix he has jumped from not appearing on Resident Advisor's annual Top DJs poll to being ranked at number 5 in 2015. He has also managed to release many an online mix (particularly excellent is RA.289), host a show on Radio 1 and smash a series of international DJ sets (both solo and alongside everyone from Armand Van Helden to Oneman).This mix is very different from his eclectic Fabric mix which fluently combined garage, grime and 'Idioteque' alongside a few rave classics. DJ-Kicks is essentially a peak-time mix of house and techno that would be devastating if played at any club, standing still and not cracking a smile would be basically impossible. The mix is mostly made up of tracks and not songs and as such really works best on a speaker system than headphones.

The mix starts with an ambient opener from Canada's LRDNCROY. This is the only real breathing space you get with tension beginning to build as it mixes into Denis Sulta's beautiful garage-y 'My Soul Needs Justice'. You wait for over five minutes for the first kick drum and when it does come it is far from a disappointment. Following this are a few modern house and techno bangers like the broken beats of X_1's excellent 'Happy Hippie Hi-Fi' whose title perfectly fulfils its euphoric suggestion of summer and raves. Massimiliano Pagliara's 'I Am Running All My Drum Machines At Once and Dancing', which features just as much analogue drum machine-worship as the title suggests, allows a smooth segue into Nineties territory. We are given some obscure tracks from long-time Jackmaster favourites such as the producer Lory D and tracks from the Underground Resistance and Dance Mania labels. Although Jack takes us from the present day to tracks from over 20 years ago, the energy level never dips.

After this old-school section we are treated to another fantastic Denis Sulta track and for me what is probably the peak of the mix. Amongst the highlights is the brilliantly weird 'Vena Cava' by Fango, a nightmarish twist on the normal ecstasy of piano house. The second-to-last track, Overmow's 'Convultions', is everything you might have imagined when someone first told you about Detroit techno: laser sounds, B-movie dialogue and undeniably dated synths. The mix ends on the chiming 'Untitled' by Pom Pom, you can almost hear the crowd roar as it ends. The first time I listened to the mix through I had accidentally queued Radiohead's 'Glass Eyes' to follow, it worked so well as a surreal end-of-set-song I was hesitant about whether it had all ended or not.