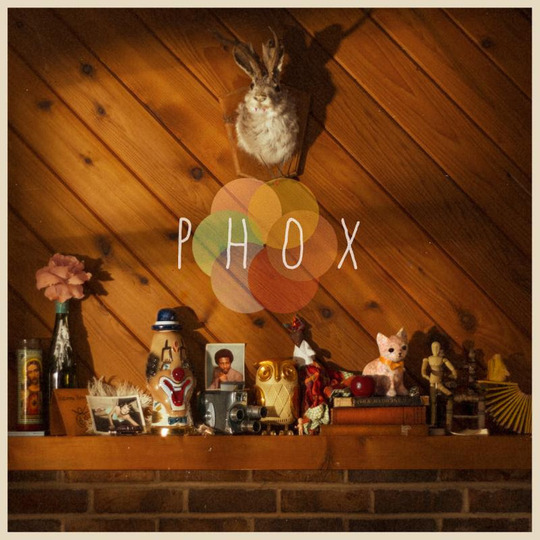 Straight out of Wisconsin, appearing like a Cath Kidston-sponsored collage made of cupcakes, Beatrix Potter novels, a 14-year old’s Tumblr, banjo strings and the contents of your Gran's front room, I present you with Phox.

As a preface, I should say that skewering twee doesn't appeal to me. There’s no dearth of material if you wanted to: the name for starters; their previous EP called Confetti; the fact that they're a sextet perhaps; a song called 'Satyr and the Fawn'; maybe the stuffed bunny rabbit head mounted on the wall of their album cover. But not only does the very idea of such a hatchet-job feel well past its best before, it would also be overegging the Bake Off pudding in both trying to make a point and thus missing the point.

Try as I might there's nothing offensive about Phox. Their debut record emerges amidst the dying embers of summer, optimally on-point for the kind of moments it'll soundtrack: a long sunset's dying light guiding you home on your last best road-trip, your friend's cheeks like melted wax against the back seat window because the record has soothingly sent them to sleep.

Producer Brian Joseph has previously seen to both Justin Vernon and The Fray, and his latest employers sit somewhere in the middle of the two. They might lack Vernon’s nuance and under-recognised fearlessness in decision-making, but they nonetheless do a nice line in the kind of unexpected strides from quiet to loud that dragged heart strings into the next room on Bon Iver, Bon Iver. Equally they're dab hands in the kind of songs that treasure a strong melody, without taking the risk of producing the kind of simultaneously career-making/destroying pop-ballad that'll soundtrack dozens of American soaps.

The resulting meld is surprisingly complex. ‘Shrinking Violets’ and ‘Evil’ are particularly delicately worked, briskly weaving a web round the houses of downtempo to uptempo. Their vocals contain some of the band’s prettiest harmonies accompanying their main asset of Monica Martin’s gorgeous lead and their arrangements are layered and affecting without ever being as affected as the band might appear on paper.

The key to the above reveals itself on repeated listening in the about-face of the opening two-and-a-half minutes. 'Calico Man' opens the record at its lowest ebb, providing mislaid assumptions of the tone and subject matter Phox might pursue. It’s sparse and echoing in its instrumentation and surprisingly solemn in the admission which lies heavy on Martin’s tongue: “I might never love again”. Immediately, though, the opposite occurs, the tumble of baroque instrumentation that heralds ‘Leisure’ acting as the true opening to the record. The result is that it recasts its predecessor as some kind of strange dramatic chorus before the curtain, a bittersweet caveat that cuts beneath all that ensuing whimsy.

It’s the realisation of their unashamed earnestness that leads a cynical mind to feel a morsel of shame for setting up to pick them apart. Indeed, if anything, Phox's main flaw is overstaying their welcome. The eagerness to make a good impression with the sheer density of their instrumentation at times is initially endearing but often frustrating, especially so when displayed over the excessive length of tracks like ‘Raspberry Seed’ and ‘Laura’, each six-minutes plus whilst achieving significantly less than their nippier neighbours.

Ultimately, if you want a more visible scuff on your sonic shoes then feel free to steer well clear. For those that don’t mind accommodating some puppyish enthusiasm to go with their elsewhere-provided edge, there’s plenty of sugary sweet and surreptitiously diverse treats in Phox’s picnic hamper to enjoy.