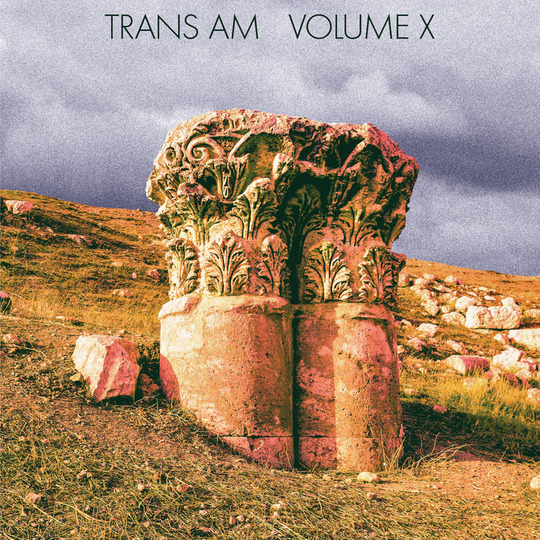 Trans Am have always been a beautiful enigma of a band. The sort of band that feel like a great big secret when you first discover them, and for good reason – they seem criminally unknown. Until fairly recently they were not even on Spotify, making sharing the joy of their existence pleasingly difficult.

Volume X is their appropriately-titled tenth album and, although the press release talks about the title reflecting the physical volume of the music and the band's willingness to embody the mysterious and unknown, it also seems to suggest some kind of retrospective of their twenty-five year career. And, indeed, long-term fans will recognise classic Trans Am elements throughout the album. 'Night Shift' has the neon futuristic sound of Futureworld, 'Re-evaluations' has the tongue-in-cheek 80s homage of TA (an album hated by everyone except me, it seems), 'Ice Fortress', meanwhile, recalls the clean, melodic sounds of Sex Change, and both 'K Street' and powerful album-closer 'Insufficiently Breathless' suggest the experimental streak that marked 2000's acclaimed double album Red Line.

But the funny thing about Trans Am is that their 'typical' sound involves experimenting with all kinds of different sounds, often within the same song. So while Volume X in some respects feels like a nostalgic tour through albums past, such a tour could never be a simple rehashing of an earlier sound, thanks to the band's relentless desire to push their sound ever farther. Trans Am have always been about keeping the classics elements of their sound – dirty synths, vocoded vocals, guitars that flirt with the conventions of classic rock – while pushing them into exciting new genre experiments.

'Backlash' is an unexpected blast of full-on thrash, complete with ridiculous guitar solo. It's like early Metallica if they somehow discovered analogue synths. On the complete other end of the spectrum is surprising album highlight 'I'll Never', which is a full-on, plaintive electro-ballad that is reminiscent of Suicide's 'Cheree'. Over an echoey Phil Spector drum beat and mournful synths Nathan Means intones “It's true, I'll never get over you” in a moment of self-reflection somewhat unknown in Trans Am lyrics. The fact that he does it while heavily vocoded and that it really works shows just how versatile a band Trans Am can be.

Leaving aside the songwriting, one other thing worth mentioning about the album is just how great it sounds. There aren't many bands who can get so many varied sounds and emotions out of their instruments and especially their synthesizers. Special mention must also go to Sebastian Thompson, surely one of rock music's most underrated drummers. His beats have always been possibly the most integral part of what makes Trans Am's take on electronic rock so special. Fresh from moonlighting with Baroness Thompson once again provides the backbone of the band, if you'll excuse the cliché. For example, the hidden menace lurking behind the dirty synth riffs of 'Anthropocene' are given extra vigour by his pounding, skittering fills, and all over the album he proves his worth, providing some of his most interesting work when the drums are heavily processed.

The only real potential downside to the album is that sometimes the songwriting feels a little flat. This was a problem that album no. 9, Thing, also suffered from to some degree. One can admire the shifting, beautiful instrumental experiments and the weird vocals for a little while but sometimes you just want the songs to pop a little more. The band sound oddly restrained at times; when it works, as on 'Anthropocene', it can add an air of swaggering, barely-concealed danger, but over the course of an album you might want Trans Am to focus a little less on the soundscapes and to focus a little more on rocking out, as they have before.

But, to look at it from a different angle, such feelings seem to point towards an album that improves and grows on subsequent listens and Volume X certainly appears to have more than enough subtle moments and hidden delights to ensure its longevity. Trans Am are a band who, in a quarter century together, have never shown any sign that they're happy to keep ploughing the same furrow. To complain about them not repeating they what did before seems downright churlish. May they continue doing their own thing for years to come.