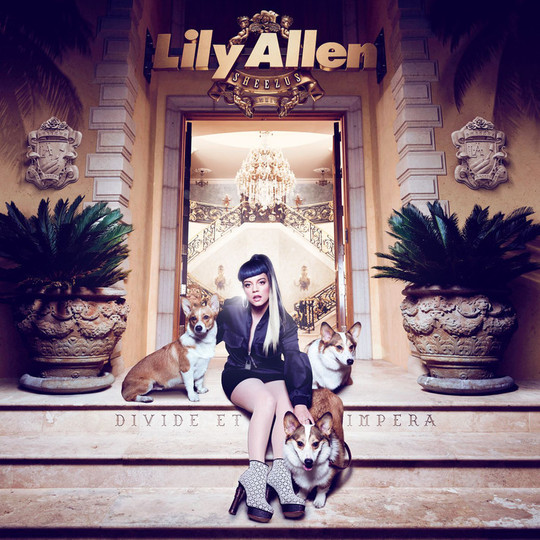 The first I knew of Lily Allen’s glorious comeback was last November, thanks to about 17 consecutive columns in The Guardian, each more tedious than the last. They were all discussing her new song, ‘Hard Out Here’, and especially its video. I had a look – 1-0 to Lily Allen – and guess what, I sorta liked it. It’s funny and catchy, especially the chorus with its deliberately dodgy autotune. Basically right, Allen is decrying how tough it is for women in the music industry and, like, generally. So: ‘You’ll find me in the studio and not in the kitchen… / Don’t need to shake my arse for you cos I’ve got a brain,’ set to a hip-hop-cum-Nineties-boyband beat.

Sure, it has all the subtlety of a sledgehammer to the balls. But then she’s not writing this stuff for indie-hipster types (like me) who actually enjoy poring patiently through songs. In our age of click-bait nanosecond attention spans, it’s probably better that her oh-so-grand statement is heavy-handed. 'Cos the message may be obvious to dweebs like us, but perhaps not so much to the demographic still buying the lion’s share of singles (young girls?).

And now let me swing in a wrecking ball straddled by a butt-ass-naked Miley Cyrus. Oh big fucking surprise: squeaky clean popstar in ‘I’m a massive slut now’ controversy. Cos no one’s deliberately caused controversy before to increase record sales, have they? Oh wait, that’s been happening since Elvis was swivelling his hips, the cheeky rascal. Lady Gaga’s made fackin’ dolla from her raved-up nursery rhymes simply by occasionally dressing in raw sirloins and live octopuses. It’s the oldest trick in the disgusting corporate-pop rulebook: stir things up a bit, make money.

That this kinda shit’s still happening – that bending over and taking it from Robin Thicke equals outrage equals record sales – means that it’s worth Lily Allen being heavy-handed. 'Cos in an ideal world, poor Miley could’ve broken out of the teen idol mould without listening to some fat suit chewing a cigar: ‘Say, kid, why don’t we try this?’ Fair play to her; she ain't the first Disney icon to try escaping the clutches of Uncle Walt with a sex-fuelled coming-of-ager, and she won’t be the last. But it’s pretty depressing that some marketing exec calculated the whole boring furore from start to finish.

Wait. Where the fuck was I? Step back.

It was the summer of 2006 and everything was shit. Tony was still carrying out the will of the Illuminati. Music was dominated by post-Libertines wankers. I was one of the wankers, having unwittingly formed a band that sounded more like Pete&Carl than the intended Pavement. ‘I have to confess something,’ my friend in the band said. ‘I really like Lily Allen.’ 'LDN', a single from her first album, was playing on the radio. Was he being ironic? It was his default posture (I’m pretty sure he was in the band for jokes). Then I listened to the song. ‘Something about sunshine’… Suddenly I was smiling. Later, I listened to another song, actually called ‘Smile’. And that was almost as good.

While Alright, Still had its moments (namely, the two aforementioned), the follow-up was fucking dull. ‘Dear Ms Allen, you wrote a fun album on Garageband (or was that Kate Nash?). That’ll do, now. Love DLO.’ But no! She’s back again, five years after It’s Not Me, It’s You. Like a zombie you keep shooting at, but missing the head.

And unfortunately, her third record is not the less-than-witty commentary on sexism in modern music that was promised by ‘Hard Out Here’ – which is safely tucked away at the end of the album despite easily being the best track. From the dire title, to the colossally bad country-jig ‘As Long As I Got You’ (we shall not be discussing the bonus track, the panic-inducing Keane cover), Sheezus is pretty excruciating.

The warning signs are there from the title track opener. For a few seconds I think she’s been listening to Sleigh Bells. Then, by the time chorus comes round, she’s name-dropping Katy Perry, ‘Queen B’ and ‘Gaga’ – so far from being her peers that it’s embarrassing – and I have to press Stop. Only, I’m meant to be reviewing this shit. Fine, press Play. ‘…I’m just about to get my period / Periods, we all get periods, every month yo / That’s what the theory is’. Oh fuck, no. What is this inexplicable shite?

It’s not all as bad as that – thank fuck. The singles are okay. With a vigorous nod to MIA’s ‘Paper Planes’, ‘Air Balloons’ seems to be jabbering on about how shallow and air-headed everyone is in this numbed-out era of terminal brain freeze. ‘Our Time’ casts a disparaging eye on the ‘live for the weekend’ culture, which has been done before, but probably matters more if a Big Name says it, right? It’s an inoffensive nugget of typical Allen pop… I like the vaguely sinister synth-organ at the end.

Things start to turn ugly with the classic-R’n’B spoof, ‘Insincerely Yours’: ‘Let’s be clear, I’m here to make money / We’re all here cos the price is right’, go the iffy lyrics. I’m starting to think all the genre-skipping ‘satire’ constitutes a comedy album. The only genuinely affecting song is the Coldplay-sounding ‘Take My Place’, which laments being in the public eye during the lowest moments. But positioned after ‘Insincerely Yours’, its earnestness is hard to swallow.

‘URL Badman’ really sums up what’s wrong with this album. It has potential, with a trendy dub-step backing track, a dash of Drake, and a decent chorus. But it’s so desperate to be culturally relevant that it sounds anything but. The character it lays into doesn’t "troll, but makes statements" and plans "to write for VICE" when he’s "a big boy". He’s "a keyboard warrior who cannot spell", likes "complex Pitchfork Winnie-the-Pooh shit", has "no empathy" and thinks girls are "silly". He sounds like a bit of a cunt, but what’s Allen’s beef with him? Isn’t she just generalising about "London white boys"? And pretty much anyone using the internet. I don’t get it.

The sledgehammer approach makes sense, in a way, but only if the satire is sharp and coherent. Too often on Sheezus, it’s not. Sure, it’s hard out here. But I can’t tell if that means Allen’s trying too hard, or not trying at all.