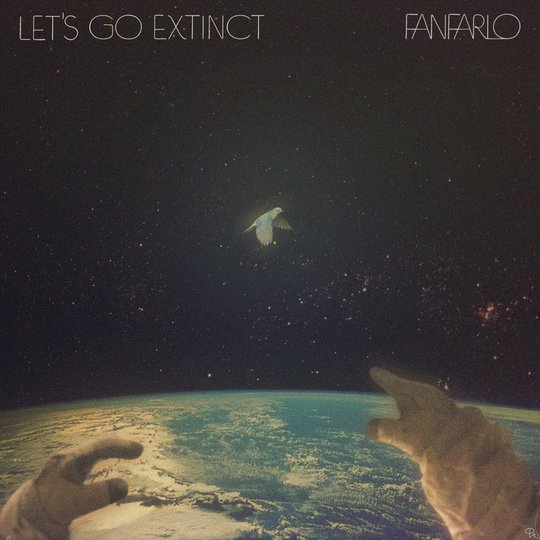 Garnishing an album title with syntactically-improper references to extinction signifies one of two probabilities. It will either knowingly refer to the band in question throwing off the shackles of their past as they venture onto pastures new, or it will evolve into a rather ironic premonition regarding said band’s long-term future (or lack of).

But before we consign Fanfarlo – baroque-pop peripherals whose 2009 debut Reservoir was an inspired work - to the same fate that befell the dinosaurs, there’s the small matter of their third record.

Let’s Go Extinct opens with a Clangers-esque whistle as ‘Life In The Sky’ cranks into life, a sound that goes hand-in-hand rather nicely with the rather impossible image presented in the record's artwork (Is it a bird? Is it a plane? No, it’s a shiny winged-creature that resembles a bird that appears to be capable of surviving in space without a miniature bird-sized space suit!). Here Fanfarlo’s wonderfully-named singer and main songwriter Simon Balthazar shares vocals with multi-instrumentalist Cathy Lucas; his trembly Swedish-tinged delivery coalescing with Lucas’ Régine Chassagne-style coo as trumpets create a fanfare around them to announce the rolling out of the red carpet for the album’s heady lyrical focus - on, as Balthazar has stated, 'the things that the theory of evolution tries to answer: where the hell are we, and where are we going next?' – to presumably take centre stage.

Existential musings aside, however, Balthazar’s is a pertinent query that can be readily applied to Fanfarlo’s musical direction. After a sojourn into more austere territories last time out (2012’s rather nondescript Rooms Filled With Light), the return to warmer songwriting pastures here enables a welcome flirtation with the more playful side of pop.

‘Landlocked’ comes on with an bouncy instrumental seemingly lifted from David Byrne’s vast archives of pre-stocked Talking Heads numbers; its disco beat and spacey keys giving way to a hazy yet rhythmic middle eight that could have easily soundtracked the crescendo of some Eighties high-school movie montage. The quintet have also retained their baroque structures of yore, epitomised most exceptionally by ‘Ruse’. Its sweeping orchestral strings, smoothly-sanded acoustic twangs, and sweeping drums make for a delectable listen – the organic Fanfarlo experience encapsulated into a nicely well-rounded 270 seconds.

And so to address our opening conundrum about how much titular significance we should award Fanfarlo’s - or indeed any band’s – new album. Let’s start by stating that with Let’s Go Extinct, Fanfarlo have dodged the bullet fired by the Smith & Wesson revolver of irony (a rare model) by ensuring that the quality of their songwriting remains solid. But they’re not out of the woods quite yet: whilst it’s a record that’s accessible and thoroughly pleasant in terms of its musicianship, it doesn’t particularly compel you to delve any deeper into its artistic significance – quite damaging for an album that’s defined by such lofty lyrical subject matter. You can’t deny that their intentions are good, but Let’s Go Extinct really is just missing that certain spark that’s required to lift it above the middle ground.