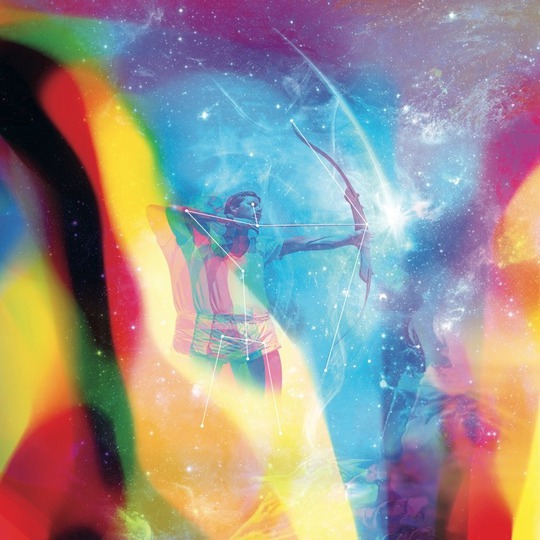 Q: What do you get if you lock a member each from Slowdive, Seefeel and Holton's Opulent Oog in a room for an indefinite period of time?
A: One of 2013's most ambitiously daring, experimentally sprawling collection of music.

Comprising Neil Halstead (Slowdive, Mojave 3), Mark Van Hoen (Seefeel, Locust) and Nick Holton (Holton's Opulent Oog, Coley Park), Black Hearted Brother represents a collaboration of sorts - supergroup even - that probably isn't quite sure how it ended up here in the first place. Born from years of writing, recording, deliberating, re-recording, remixing and then no doubt starting all over again from scratch, Stars are Our Home is a deftly orchestrated album that bypasses all generic templates for a colossal smorgasbord of diversity. Throughout its 12 pieces, there's a range of sounds, styles and ideas far and above any realm of expectation associated with the project. In the press release, Halstead talks about Stars are Our Home being 'a record that was in some ways unedited', before going on to conclude, 'while not worrying about a particular sound or style, but to just go with the flow'.

And while that only tells a mere fraction of the story, it perfectly illustrates the manner in which Stars are Our Home was constructed. At times, as on the opening title track, there's an organic, almost improvised feel about the record. Barely changing tempo for the entire duration of its six-and-a-half minutes, the opener builds around a motorik beat and repetitive loops. While not that dissimilar in structure to other recent exponents of kraut-inspired psychedelia Eat Lights Become Lights, 'Stars are Our Home' stands out as a sore-thumbed anomaly here. Yet as an introductory piece it guides the way eloquently for what follows.

'(I Didn't Mean To) Wonder', the first track made available from Stars are Our Home offered a mouthwatering, if deceptive preview. Skyscraping guitars collide with pervasive rhythms, all infused by an arresting melody and Halstead's space echoed vocals. It's by far the most accessible tune on the album although anyone expecting a dreamy futuristic pop record in a similar vein will be gobsmacked by the rest of Stars.... 'This Is How It Feels' takes a more refined approach, drifting into M83 mode by way of its electronic backbeat underpinning every twist and turn. 'If I Was Here (To Change Your Mind)' also shows Black Hearted Brother's reflective side, this time courtesy of a simple piano ballad that occasionally dips its toes into more reverb-laden waters at the chorus.

Indeed, it's the unerring level of diversity that makes Stars Are Our Home such an endearing listen. 'Got Your Love' sounds like northern soul had it been crafted in the twenty-first century somewhere between Newquay and New York. Pounding rhythms exchange glances with the occasional post-punk guitar surge. 'UFO' also takes pop through the harsher confines of white noise plated guitar swathes while 'My Baby Just Sailed Away' fills the void between Kraftwerk's functionality and Depeche Mode's elegance.

What's most impressive is that Stars Are Our Home is to all intents and purposes an album full of love songs, unrequited or otherwise. 'Oh Crust' takes an organ-led melody into choppier waters before declaring, "I'm alright cos I believe in you, I'm alright cos I'm in love with you." Although most of the lyrics here are indecipherable, largely due to the heavy effects accentuating the vocals, most of those which can be ascertained seemingly document a similar theme. The closing 'Look Out Here They Come' also falls into the same category, this time in the form of a haunting lullaby not that dissimilar to Ron Grainer's theme to cult television series Tales of the Unexpected.

Overall, Stars Are Our Home is a delightfully mixed bag that does rare justice to the term 'supergroup'. Whether or not Black Hearted Brother wish to be described in such a way is open to debate. However, its three contributors should be proud of their labours.