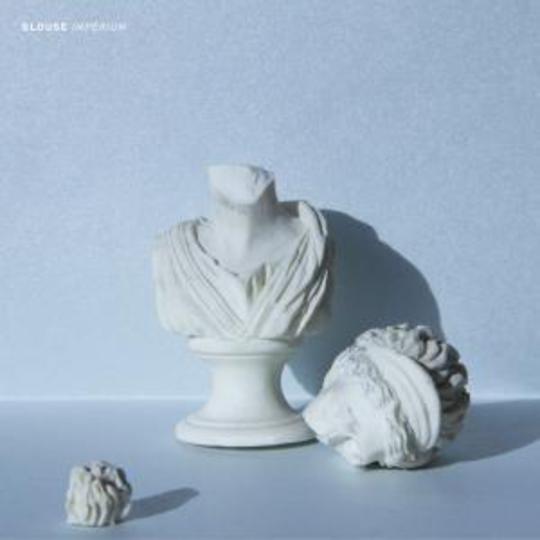 With the psych rock/dream pop/call it what you will revival in full swing, separating the good from the bad and distinctly average is becoming a laborious pastime. Fortunately, Portland trio Blouse fall quite succinctly into the first category. Having only formed as recently as three years ago, mainly as a side-project for producer Jacob Portrait and art school graduates Charlie Hilton and Patrick Adams, they've established themselves as one of the most progressive outfits from a scene that's forever gazing into the past for inspiration.

Their 2011 self-titled debut provided an enticing introduction, its elegant fusion of post-punk, effects-laden dreampop and looped psychedelia ensured any follow-up would be a mouthwatering prospect. Two years down the line, and with the emphasis firmly focused on diversity rather than conforming to any pre-ordained template, Blouse have delivered a record that sticks close to its influences, yet offers a greater insight into its creators' personalities.

Although largely defined by Hilton's spectral vocal, there's a greater reliance on a more traditional band aesthetic here than Imperium's predecessor. With Portrait having stated Imperium was written and recorded using 'instruments that don't plug into the wall', it would be fair to say that a lot of the electronic elements which characterized their debut are conspicuous by their absence here. However more importantly, that change doesn't make for a lesser record. If anything Imperium has a more dominant, urgent edge about it.

While Hilton's voice still manages to sound ethereal and mystical for the most part, her cohorts' musical accompaniments owe more to the raucous early Sub Pop releases or latterday post-punk squallings of Diiv and Beach Fossils than any early Eighties-fixated synthpop across Imperium's ten pieces. With its bass heavy intro and incessant riff, opening number and title track 'Imperium' could be a long lost Nirvana track pre-Bleach were it not for Hilton's hazy vocal performance. 'Eyesight' too may sparkle effervescently thanks to some delay-heavy space echo vocal effects but its backbeat could quite easily have walked out Gang Of Four's studio at any time over the past 25 years.

Sure enough, there are moments on Imperium that stay true to the concept of the band's debut. Take the whimsical '1000 Years' or delirious 'In A Glass' for instance, either of which Frankie Rose or Melody Prochet would no doubt be proud to call their own. It's when Blouse do coarse that their new found identity rises to the fore. 'In A Feeling Like This' captures them at their most potent while the penultimate surge of 'Arrested' suggests feet were rarely taken off the pedals even towards the bitter end.

When Blouse do slip into melancholic waters - as on the refined lament 'Capote' - Hilton's delivery is filled with enough sincerity and belief as to not undermine their more caustic tendencies. The only downside with Imperium is that maybe its creators have neglected the more intricate details of songwriting (verse/chorus/verse anyone?) for an angular propensity but on the whole, it's a finely tuned assortment and another welcome addition to Captured Tracks' impeccable catalogue of riches.