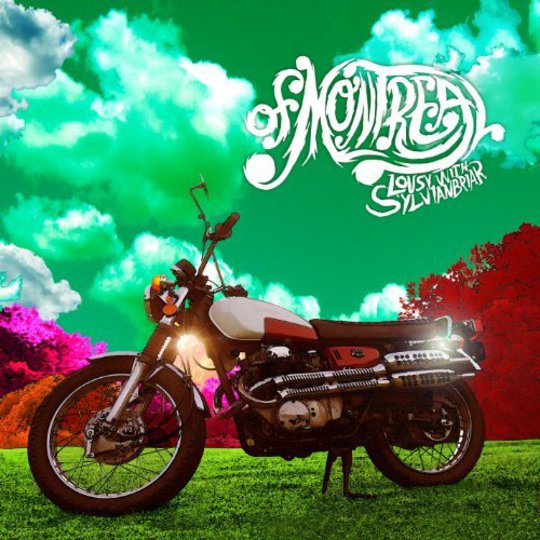 The fate of most artists isn't burning out or fading away, but to simply carry on existing. Which is not intended by way of criticism Kevin Barnes and Of Montreal, a band that has continued to exist prolifically since 2007’s indie/funk/electro/Kraut/confessional masterpiece Hissing Fauna, Are You The Destroyer? But after releasing that record’s fucked up sibling (Skeletal Lamping) and its funked up one (False Priest), Barnes has had the air of a man who has firmly moved on from – for want of a better turn of phrase – the music he was ‘best’ at.

The curate’s egg EP thecontrollersphere was followed by the sickly prog of last year’s Paralytic Stalks. Now, of all things, Barnes has gone folk rock with Of Montreal’s unexpected and by no means unpleasant twelfth record.

The good news for those turned off by the madder excesses of Paralytic Stalks and Skeletal Lamping is that Sylvianbriar is the band’s most conventional-sounding record in aeons. In fact, there’s some irony to the fact that after cutting out all electronics and going to the effort of essentially assembling a new band, complete with pedal steel, mandolin and new vocalist Rebecca Cash, Barnes has created a record that sounds not totally dissimilar to pre-Hissing Fauna Of Montreal, ie slightly wispy guitar-led pop.

But there’s no denying that the man singing the songs has changed – though it feels less damaged than Paralytic Stalks, Sylvianbriar’s have that post-Hissing Fauna darkness, Barnes despatching torrent after torrent of accusation at some unnamed figure – “I have a sense you want to be the female Henry Miller, cynically referring to your lovers as your prince and exploiting other people's madness” he says on ‘Belle Glade Misionaries’; “I guess you feel you have a lifetime pass, and you can be a dick and it doesn't matter. But I'm finished, I'm set free and basically you're just dead to me” he snarls on closer ‘Imbecile Rages’.

Quite who he’s talking to is unclear – Barnes being Barnes, some of it is presumably about his long-suffering wife Nina, though, er, hopefully not the above quoted bits. Whatever the case, the recurring sense that he’s having some sort of froth-mouthed rant at someone, on the grounds of some personal feud or other, gives the record a slightly sour flavour. Which isn’t necessarily a bad thing, as the caustic, almost White Stripes-y twanging of opener ‘Fugitive Air’ proves masterfully, while frequently his formidable melodic gifts allow for a spot on blend of tart and honeyed – I wouldn’t like to be the lass ‘Belle Galde Missionaries’ is directed at, but it’s got an absolutely killer chorus, like Diamond Dogs gone Deliverance. And ‘She Ain’t Speakin’ Now’ is almost certainly the peppiest song about being paranoid your wife and daughter are going to die of flu - “Girl with the flu, I hear the death rheum, she ain’t doin' well”, he chirrups.

But in other spots a kind of torpor sets in – the lyrics are as dementedly florid as ever, and the songs are for the most part hooky, but nonetheless, musically Barnes has turned his back on the grandiosity, the sexiness and the out and out weirdness that defined his greatest days. It’s not like a normalised Of Montreal have nothing up their sleeves, but combined with the slow-to-midtempo country pacing it can make for some slightly unengaging songs – the likes of ‘Obsidian Currents’ and ‘Sirens of Your Toxic Spirit’ drift past dreamily, but there’s a lack of frisson there, no danger outside of the words. And there’s an uncomfortable truth thrown up by the woozy, Cash-sung penultimate track ‘Raindrop in My Skull’ – that maybe for this style of music Barnes’ elaborate words simply sound better coming from a different vocalist.

Lousy with Sylvianbriar won’t ever be viewed as the quintessential Of Montreal album. But sourness aside, it’s the healthy sound of a restless spirit – it’s more or less impossible to imagine Barnes giving this gig up anytime soon, and maybe someday he’ll find a new music to be ‘best’ at.