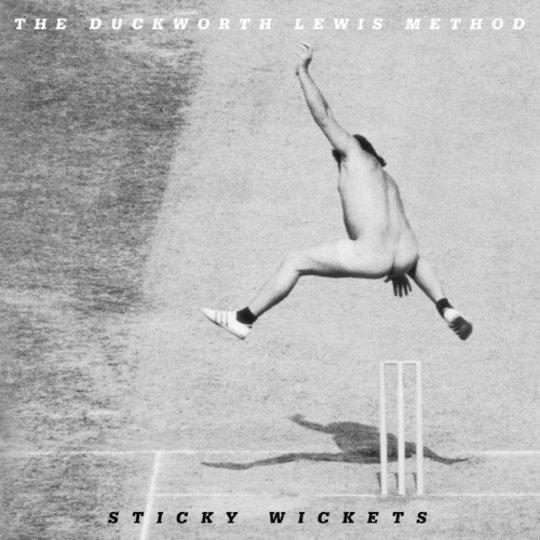 I’m sure I said this is another review recently, but the best albums are great in context. Straight Outta Compton for example probably wouldn’t be considered so important without the background of racial tension from which it was born; Rumours is perfect because of the tensions and tortured breakups within the band during recording rather than in spite of them. For clarity’s sake, I’ll take this moment to assure readers that I’m absolutely NOT saying that Sticky Wickets is in the same league as Straight Outta Compton or Rumours. But in its own field (pitch?) it's as much a triumph of either.

So Sticky Wickets, the second innings from The Duckworth Lewis Method, is to be judged within the genre of concept albums about cricket. Weak jokes aside, there is an argument to be made for cricket as the sport of rock and roll. Nothing else has the drama of a test match: the shift in momentum that can be allowed to play out almost imperceptibly over a day or the one dramatic over that can alter the entire complexion of a match. Yes a five day match can seem dull when compared to the instant gratification of other sports or even T20 cricket, but the dedication required and the ultimate reward and enjoyment are the same as that which can be found in a seminal Krautrock album or a great jazz composition. The joy of watching the most resilient batsman fending off a hostile spell on a green wicket or a wristy spinner in a subcontinental dustbowl can really only be achieved through the same all-consuming persistence as that needed to fully appreciate, say, some of the more left-field indie records of the past twenty years. Moreover, no other sport could ever inspire The Divine Comedy’s Neil Hannon and Pugwash’s Thomas Walsh to write two full concept albums about it.

The great commentator John Arlott famously described Clive Lloyd pulling the ball into the Mound Stand at Lord’s in 1975 as “The stroke of a man knocking a thistle top off with a walking stick”, however the more mortals among us can rarely hope for such evocative eloquence in the days of Twitter and the hashtag. Instead the world of music can offer the most apposite metaphors for a pastime so poetic: I have previously argued the merits of Gordon Greenidge over Virender Sehwag at the top of an all-time XI’s order by describing the merits of Clapton’s druggy, dripping Cream-era guitar riffs over the immediate bombast of a Metallica album. Meanwhile I confess to having had one of those nerdy discussions over a ‘Reckoner’ XI : a collated team of players whose artistic style echoes the organic fluidity of the gorgeous Radiohead track.

Then you have 10CC’s oft-misinterpreted ‘Dreadlock Holiday’, Rory Bremner’s ‘N-n-n-n Nineteen Not Out’ ('An unlistenable crime against music… a cricketing parody of Paul Hardcastle’s scarcely-less-terrible "Nineteen"' according to The Guardian’s Andy Bull) and Roy Harper’s lovely ‘When an Old Cricketer Leaves the Crease’, so beloved by John Peel that it was played on air after his death at his request. It’s worth mentioning too, some of the personal anecdotes that musicians like to recall about the game: from the somewhat inauspicious (Harry Judd from McFly, Johnny Borrell of Razorlight, David Essex) to the iconic (George Harrison, Clapton, Elton John, Rolling Stones Charlie Watts and Mick Jagger), BBC Radio 4’s Test Match Special has heard some fascinating first-hand stories over recent years. Former England bowler Mike Selvey once recalled to me the time that Clapton and Harrison played in a pub in Worcester after going down to see Botham play, and the time he and his teammates were visited in the Lord’s dressing room by a young Elton John. He also talked about The Stranglers’ Hugh Cornwell, who in 1990 was watching a Test between India and England and saw England fast bowler and hapless batsman Devon Malcolm break free from the shackles of being tied down by India’s bowlers with an agricultural heave into the stands for six; he would later cite this moment of release as his inspiration for leaving The Stranglers and embarking on the next stage of his career, going it alone outside of the familiar confines of the band.

I have no evidence, anecdotal or otherwise, to confirm this, but I also recall reading that ELO’s Jeff Lynne is something of a cricket tragic. This neatly brings us full circle, for Sticky Wickets sees the duo further indulge in their love of Birmingham’s greatest ever band (and I say this as someone who was brought up by Ocean Colour Scene loving parents). The Light Orchestral influences were heavily evident on their eponymous début, but had anyone told you this was a bonus disc of outtakes from Out of the Blue then only the lyrics would betray them. A rocking, anachronistic Seventies pop rock riff leads the way on opener ‘Sticky Wickets’ as Walsh proffers advice for openers batting on era-appropriate uncovered pitches – “Don’t get caught trying to hit the big shot... it’s no good playing on the back foot.” Elsewhere there are almost direct ELO correlations. ‘Third Man’ sounds like ‘Telephone Line’ from melody through to brilliant vocoder breakdown; ‘It’s Just Not Cricket’ is the album’s ‘Diary of Horace Wimp’. It’s a sound so perfect that the duo only really veer away from it once, as ‘Line and Length’ sounds closer to LCD Soundsystem’s ‘Us and Them’.

Sticky Wickets is certainly more Village Green Preservation Society than Fire in Babylon in tone. The only point where Twenty20-esque glamour is touched upon is ‘Boom Boom Afridi’, with David 'Bumble' Lloyd helping out on vocal duties in tribute to the hard-hitting Pakistani all-rounder. For the rest of the album though it’s outdated playing conditions on the title track, the sad existential musings of ‘The Umpire’ (“We’re only here to be sneered at, just a relic of yesteryear/There was a time when we were held high, but it’s not how it used to be/They only let us stick around so they’ve someone to kick around”) or the hapless fielder being put out to pasture at third man on, er, ‘Third Man’ (featuring a reading from Harry Potter Daniel Radcliffe). There’s Python-esque joviality on ‘The Laughing Cavaliers’, which features Hannon’s local Taverners team, but it’s really a reminder of the sort of level the Cricket Tragic can aspire to, rather than thinking Viv Richards is just like us.

'Cricket Tragic' is the key here. Cricket and rock music have a long history, and at points it all gets a bit glamorous. Sticky Wickets isn’t concerned with those though: it takes the thinga that makes the loner, the geek, the loser, the tragic feel all warm and fuzzy, and then makes that sound like ELO. And nothing this year has made me feel happier than that. FoW.