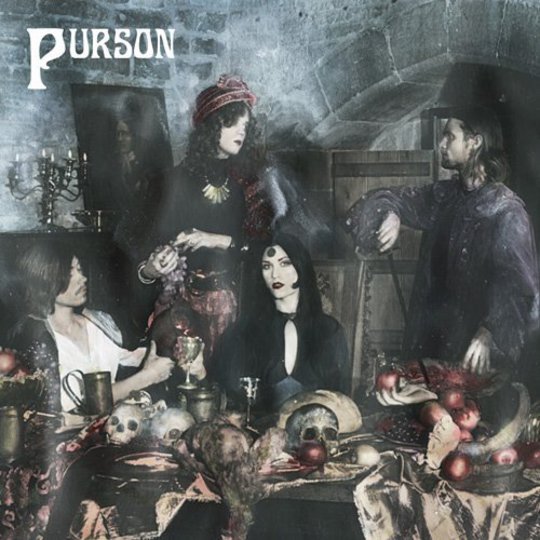 Some people out there think it possible, at least, that Purson are going to be big. I don’t know their names, or if Purson themselves hold this belief, but without getting too far into how-your-sausages-are-made territory, bands don’t get picked up by these guys or the Mercury Prize’s press people just because someone rates their tunes. Together for approximately two years, the doom metallers and occult thud-rock heads that make up most of their current fanbase are something of a red herring when considering The Circle & The Blue Door, the London quintet’s debut album.

Purson might fraternise with battle-jacketed doom lifers – appearing at the Roadburn festival, last weekend at the time of writing – but largely walk a different path. Singer and guitarist Rosalie Cunningham used to be in Ipso Facto, briefly promising garage revivalists from 2007’s New Cross indie scene: 34 YouTube users have expressed approval for 2headedzebra’s comment, 'they are girl version of the horrors,' and you can’t argue with stats. In fairness, she’s never attempted to deny her recent past, but her current venture isn’t that far removed from Ipso Facto’s short discography. Most of this record exists at a tuneful, giddy midpoint between florid psychedelia and prototypical hard rock, and if Finders Keepers Records scattered parts of it across a compilation or three and dated it to 1971 in the sleevenotes, I suspect more people would be fooled than not.

As it goes, it’s a perfectly logical fit for Rise Above in 2013, too. Label boss Lee Dorrian took a punt on Witchcraft and Circulus in the middle of last decade when hardly anyone gave a shit; more recently, Ghost and Uncle Acid & The Deadbeats have straddled obscure, mystic weirdness and earworm accessibility, and both bands have reaped rewards. (If nothing else, their habit of flogging deliberately limited, wildly overpriced vinyl to eBay flippers and collector dopes will have turned Rise Above a tidy profit.) Purson are one of a fair few groups currently offering both witches and winks – their photos do not suggest a band entirely stone-faced about their image – and generating chatter in the Ghost/Uncle Acid slipstream. It’s easy to be cynical and assume that The Circle... is surplus to requirements, but try this for a counterpoint: ‘Spiderwood Farm’, one of the first demos the band uploaded and track three on this album, is a better song than anything Uncle Acid have released to date. Cunningham’s duchess-plummy vocals aside, it bludgeons you with a guitar’n’organ riff combo that’s so catchy, the fact that it pretty much just repeats itself after a clawfisted wah-wah solo matters not.

It’s sometimes said that every band have one great song in them, and Purson may have written theirs very early on. That is to say: too much of this album is just okay, aesthetically immaculate but with lamentably little going on beneath the surface. Starting with a mannered, FX-peppered Bowie-esque ballad (‘Wake Up Sleepy Head’) and something which vacillates between Silver Apples and Led Zep (‘The Contract’), The Circle... isn’t exactly front-loaded, but neither cut is the sum of its parts, which makes ‘Spiderwood Farm’ feel like even more of a banger.

As much as it feels obvious that Purson didn’t want to just make a simple-pleasures hard rock album, the results would have very likely have been better if they had, as this mode is their forte. ‘Leaning On A Bear’ has winningly dusty garage-psych keys and a galloping proto-punk rhythm. ‘Mavericks And Mystics’ is probably the album’s leading showcase for Cunningham’s room-filling wail: “it’s us against you all!” with the last word stretched to about twenty syllables. ‘Sapphire Walls’ has exhilaratingly choppy, early Deep Purple-type bits and pensive psych-folk bits, which handily condenses their strengths and shortcomings into one song.

This formula doesn’t always follow: ‘Tempest And The Tide’ is agreeable gothic folk, although the sparse fingerpicked intro hint at a song that could have done with more breathing room. By this point, though, you’ll have already endured ‘Sailor’s Wife’s Lament’, boisterous cobblers which has seagull noises and would probably go down a storm at a steampunk festival. Suddenly, this journey to the centre of the fancy-dress chest seems a little less palatable. As much as it rankles to imply a competition between notionally similar bands (who would no doubt reject all points of comparison), Uncle Acid and Wolf People both have superior albums fresh in the racks, and if a woman singing is a bonus for you, the imminent new one by Blood Ceremony trumps The Circle & The Blue Door too. Purson deserve better than to fall through the cracks, but if you only have so much time...