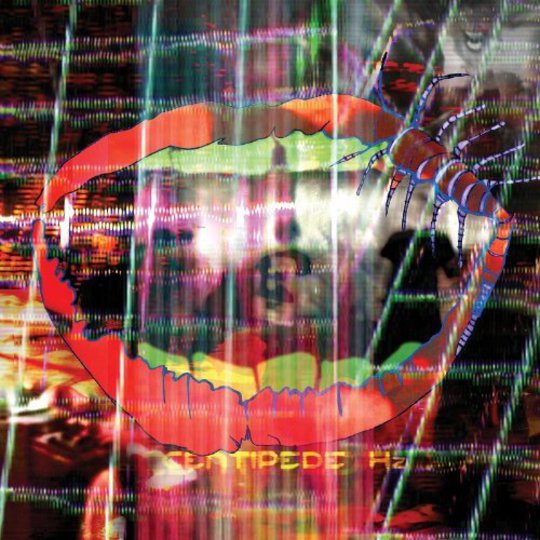 Ah, the indiesphere, early 2009. Crazy time, crazy place. To a few thousand internet people, the release of Animal Collective’s Merriweather Post Pavilion seemed like a happening of such monolithic import that the inauguration of Barack Obama, continued implosion of the world’s economy, etcetera, etcetera felt like trivial, even presumptuous distractions in comparison.

Almost four years and one tangential ‘visual album’ later, Animal Collective’s ninth LP proper has conspicuously failed to reduce the internet to a quivering nerdgasm. Partly that's because Centipede Hz comes out in release-packed September, not desolate January; partly it's because bands just don’t sustain that sort of hype over two records; partly it's because the cover art is, frankly, less rad than MPP’s.

But mostly, I’ve got to confess, it’s because Centipede Hz is less good than Merriweather Post Pavilion, and I suppose in this review I should be taking Animal Collective to task over it. Curse you Animal Collective, for Centipede Hz’s knotty, over-tangled electronic sounds, wherein a general over-abundance of pounding, luminous noises – possibly ushered in by the need to accommodate the returning Deakin, who has been off allegedly defrauding people on Kickstarter on sabbatical – tends to obfuscate the actual songcraft. Damn your eyes, Animal Collective, for constructing a record whose busily chattering electronics tend to baffle and entangle the joy in Avey Tare and Panda Bear’s voices, shielding us from the radiant rush that made MPP and Feels so transcendent. May your loins be infertile, Animal Collective, for creating an electronic record whose Technicolor doodlings are going to advance dance music about as much as my breakfast this morning did.

The only problem is that I fundamentally like this album. It’s jolly and kinetic and greater than the sum of its songs and comes laden down with happy memories of being fuzzily wasted and enjoying many of these tracks for the first time at Primavera last year. It’s not a major album, but are Animal Collective obliged to make major albums? I might draw parallels with Radiohead’s The King of Limbs, another low key, late career electronic record that got lambasted for not being earthshatteringly brilliant. But Radiohead are so self-consciously portentous as to invite that sort of thing; Animal Collective are just four dudes with silly pseudonyms who make sunny music and probably just about sell enough records to work as musicians fulltime.

There is nothing here as glorious as the moment when ‘In The Flowers’ detonates like the dawn of creation or the agonisingly gorgeous slow burn of ‘Banshee Beat’. But if the band rarely totally nail it, Centipede Hz dances and sparkles with moments of magic: the thick neon thrum and squealed passion of ‘Today’s Supernatural’, with Avey’s constant, kinetic exhortation to “let go!”; the fairground keys and snarled passion of ‘Applesauce’; the sheer, vertiginous sense of yawning space and controlled force in Panda’s ‘New Turn Burnout’; the dreamy primitivism of his ‘Pulleys’; the final, blissful eruption of ‘Amanita’s final minutes, where the joy in Avey’s sentiment and the joy in his delivery finally match each other as he cries, “I'm gonna come back and things will be different, I'm gonna bring back some stories and games” over glowing pinwheeling screams of synth and bounding drums, over and over and over and over, Centipede Hz at the very last locking into the groove it probably ought to have found at the start.

Elsewhere there are some sloggy songs and some sloggy moments, bits where the band’s typically immaculate self-production and lush patina of keys, glitches and weirder FX elevate a weaker tune, bits where they snarl it up and drag it down. Realistically, the songs on this record are not this band’s best songs. But you know, I like it, it puts a smile on my face, it’s Animal Collective for fuck’s sake: if you don’t get some joy out of their records you should possibly give up.