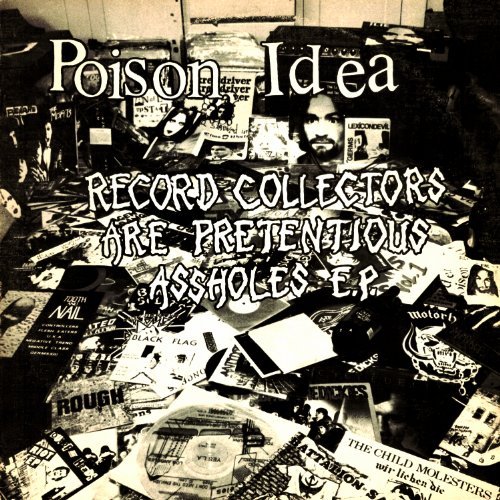 The Fatal Erection Years is a fascinating retrospective into the development of a hugely influential band's sound. Over and above that, it's a clean and pure blast of hardcore punk that sounds like it could have been written yesterday.»

a must have for die-hard fans and any fan of true hardcore punk-rock! 45 raw, filthy nasty tracks from the undisputed kings of punk! remastered, restored by jack control (world burns to death, severed head of state). one of the most influential american hardcore / punk bands of all time. follow up to the popular 'darby crash rides again' album released by southern lord early 2012. poison idea's official debut release was 1983's short, lo-fi blast of punk / hardcore fury, 'the pick your king' ep. the infamous jacket featured a 'choice' of two kings, jesus (front cover) and elvis presley (back cover). it was released on the bands own fatal erection label. in 1984, the band released the 'record collectors are pretentious assholes' 12" (the cover, featuring guitarist pig champion's substantial vinyl collection). the record found the band incorporating subtle heavy rock elements into their music which was further honed on their contribution to the 1985 'drinking is great' compilation 7" with the track 'laughing boy'. both record collectors... and drinking... were self-released on fatal erection records. by this time (84-85), poison idea was in full swing and were perfecting their signature wall of sound: raging punk attack. in cooperation with the band and tko records, southern lord is honoured to release the cd version of 'the fatal erection years'. this compilation collects the 'pick your king' 7", 'record collectors are pretentious assholes' lp, and 4 compilation tracks from the era. exclusive to this cd version (only), is the entire live set from the band at their best in portland circa 1983. live at the met features 19 live raw punk blasts and effectively brings this essential archival document to a raucous, destructive end. poster / booklet contains liner notes from poison idea vocalist: jerry a. and tons of photos, flyers etc. from the bands history.
description from www.roughtrade.com