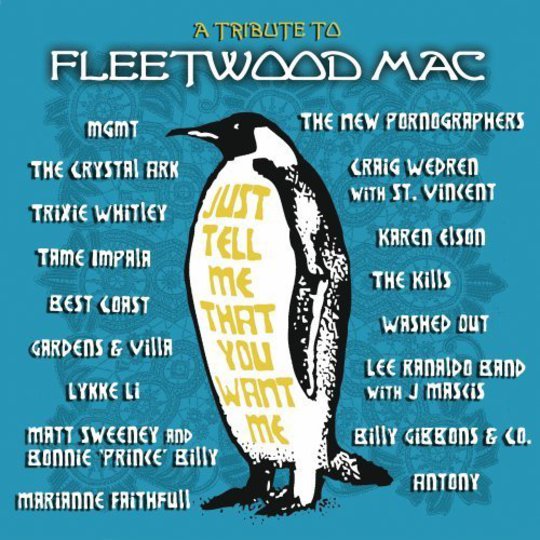 Rather than trying to concoct some specious sociological explanation for the existence of this compilation of alt. rock Fleetwood Mac covers, let’s be clear that indie’s only fractionally ironic love affair with the AOR legends is long lasting and well documented. The Smashing Pumpkins scored a hefty radio hit with a cover of ‘Landslide’ back at the height of grunge; and for reasons I’ve never quite understood, cow-punk deities Camper Van Beethoven once released a track-for-track cover of the Mac’s 1979 double album Tusk.

I guess the crux of it is that most right-minded musicians would accept any and all of the later Mac's emotional dysfunction for the sake of writing pretty much anything as good as the songs off Fleetwood Mac, Rumours and Tusk. Despite the band’s ludicrously convoluted history and the fact that they’re probably some of the last people in the world you’d want to go to the pub with, those records don’t sound naff or dated or like they were made by coked up multimillionaire musos. Bung on one of the aforementioned and then try and listen to an Eagles record afterwards and you'll see what I mean.

So anyway, an indie rock Fleetwood Mac covers album is almost certainly a thing that could have reasonably been made at any point in the last three decades. That Just Tell Me That You Want Me happens to have appeared in 2012 is down to the efforts of one Randall Poster, the musical supervisor on Wes Anderson’s films, and Gelya Robb, who seems to be some sort of hipster sidekick of his. I’m not sure 'vanity project' is quite the right term here, but presumably in paying the bands and giving all the royalties away to Nicks, Buckingham, Green et al, there is zero chance of Poster and Robb making a profit on this. Still, they did the same thing for Buddy Holly with last year’s Buddy Holly Rave On compilation; maybe we’ll get another next year!

So yes, anyway: ever wanted to hear a New Pornographers power pop cover of Tusk’s ‘Think About Me’? Or an over-faithful Lee Ranaldo Band and J Mascis take on 'Albatross'? Yeah, I’m not sure I did either, and that’s kind of the problem with this collection: without any guiding principal beyond ‘some bands playing some Fleetwood Mac songs in their own style’, it lacks direction, coming across as more of an introduction to the performers than the songs. I mean, sure, getting MGMT to contribute an interminable vocoder cover of ‘Future Games’ is a great wheeze, but it’s profoundly unlikely to fire anyone up about the original.

It's at by far its strongest when it gives us fairly straightforward covers of Stevie Nicks songs that showcase a nice pair of pipes on the performer. Matt Sweeney and Bonnie ‘Prince’ Billy’s fragile take on Tusk’s Storms is a gorgeous country whisper. Antony’s cover of ‘Landslide’ is utterly mesmeric: he doesn’t monkey with the music in the slightest, but it's just a treat to hear a voice as desolate and unique as his follow in Nicks' wake. Lykke Li's percussive 'Silver Springs' has a thundering, ice-queen majesty. And Marianne Faithful's primordial croak meshes with a superb band for a luminous, worldly wise 'Angel'. Even slightly pedestrian takes on 'Gold Dust Woman' (Karen Elson), 'Rihannon' (Best Coast) and 'Dreams' (The Kills) fail to in any way shroud the class of the original songs.

That ten of the 17 tracks here are by Nicks is perhaps predictable: her otherworldly vocals and witchy lyrical concerns translate better into the indie aesthetic than stuff by the band's other songwriters and she was, y'know, the cool one. And clearly indie rock musicians were never going to go mental for the band's early music. Nonetheless, Lindsay Buckingham feels spectacularly hard done by - only two of his songs feature, which is basically mental. It all adds to the feeling that there's no particular point or guiding aesthetic here. Which is clearly overthinking things, but nonetheless it's pretty rudderless stuff coming from the man who brought us the soundtracks to The Life Aquatic and I'm Not There.

Still, if Christine McVie (one song) feels even harder done by, at least there's no bloody 'Daddy'.