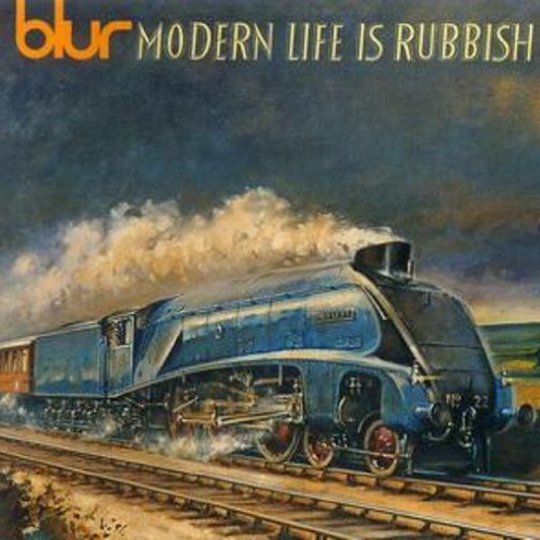 I’m not quite sure if I’m searching for another word here, but there’s something wonderfully pure about Blur’s second album. Not only is Modern Life Is Rubbish a virtually perfect record, musically, but it comes without the baggage of the albums that surround it: no hit singles, no feuds with Oasis, no silly videos and no Britpop (though it would be retrospectively appropriated as such), its lyrics full of yearning for a vanished West London rather than the brassy Camden-isms of the next couple of albums.

Of course Blur's subsequent enormity means these are hardly obscure songs now, but nonetheless, one of the things I love the most about Modern Life Is Rubbish is how relatively unfamiliar most of it is next to the band's later stuff: these are not songs that were ever played to death, or that your mum liked, or that you heard on the radio... at 14 tracks (16 if you count the two short instrumentals) and almost an hour’s running time, it’s a long album to get lost inside and be surprised by, to be taken aback by the strange, scratchy guitars, hesitant, melodic vocals and wistful, wonderment-filled lyrics.

Modern Life Is Rubbish is the only Blur record that really reflects that experience of being young, uncertain and living in London. Despite Leisure's relative success, by 1993 Blur were skint, with their critical and commercial thunder comprehensively swiped by Suede. Moreover, they’d been left demoralised by a 44-date tour of the US and their then-records labels Food (in the UK) and SBK (US) were vocal in their unhappiness at the new material. Indeed, it’s weird to think what a strange, downbeat record Modern Life Is Rubbish might have been if it had been simply released as the band submitted it in late 1992, at which point it lacked the yearning, anthemic quasi title track ‘For Tomorrow’ and the grimy pop of ‘Chemical World’, songs bashed out at the behest of Food and SKB respectively.

I’ve never seen totally eye to eye with ‘Chemical World’ – it’s an immaculately constructed song, yet its precision-tooled bounciness does have the faintest whiff of being written to order. But ‘For Tomorrow’ says most of what you need to know about the sort of form Blur were hitting: Damon Albarn apparently bashed it off the whole thing on his parents’ piano on Christmas Day 1992.

Perhaps because it was written after the rest of the record, ‘For Tomorrow’ feels like a perfect distillation of the Anglophile shift the band’s sound underwent following Leisure, all soaring strings, surging melody and wry, painterly descriptions of London life (“she's a naughty girl with a lovely smile, says let's take a drive to Primrose Hill, it's windy there, and the view's so nice”). It is, above all, a deeply romantic song, a love letter to being cold and young and skint in London, enjoying the city’s vertiginous grandeur even if you can’t afford any part of it. It is a near enough perfect track, and probably the moment when Albarn really came of age of a songwriter, foreshadowing the chutzpah of Parklife and – in the brilliant half-spoken outro – the inventiveness he’d deploy in writing pop songs forever after.

Elsewhere this is tangibly a record dominated by Graham Coxon: the taut, pummelling guitars of ‘Advert’ and ‘Coping’; the nervy jangle of ‘Colin Zeal’; the menacing peals of ‘Pressure on Julian’; the almost overwhelming harmonic surge of ‘Turn It Up’; the heavy, iridescent smear of ‘Oily Water’. Damon’s knack for melody is crucial - the record is worth it for the unutterably gorgeous chorus to ‘Blue Jeans’ alone. But it wouldn’t pack half its punch without Graham: Modern Life Is Rubbish and Suede were pretty much the only hard-ish – certainly the only inventive - guitar records to emerge from Britpop. Modern Life Is Rubbish is a challenging, pretty, arty record full of hope, fear, melody, dissonance and simple love of music. If Damon's contributions prefigure Parklife and The Great Escape and Graham's Blur and 13, then it is tangibly a very different beast to either, a record about being young, and alive.

When I said it doesn’t come with any baggage, it would be more correct to say we don’t bring any baggage to it: disc two of this expanded reissue is Modern Life Is Rubbish’s baggage. It has been suggested that there was a ‘lost’ second Blur album that was scrapped and redistributed as the b-sides to the Modern Life… singles; I think it’s maybe more accurate to say they demoed a load of stuff post-Leisure that they didn't feel was right for its follow-up.

Whatever the case, ‘Popscene’ is certainly one of the all-time great lost singles, a frenetic punk/music hall stomp whose ‘failure’ in the charts (it reached number 32, only four lower than ‘For Tomorrow’) led to the band refusing to include it on the finished album. In retrospect this was clearly a very silly thing to do, but it’d seem ludicrous to rehabilitate it now; instead it occupies pride of place on the bonus disc, pretty much giving Modern Life... the most desirable set of extras in this reissues series by default.

Further in there’s a very intriguing mix of obscurities that clearly indicate a band entering their stride as musicians, if not entirely sure of their identity: you would never in a million years pick out the reverb-heavy blues of the excellent ‘Pop Scene’ b-side ‘Garden City’ out as Blur; by the October 1993 ‘Sunday Sunday’ single their infatuation with Englishness had reached something like self-parody, with punk rock covers of ‘Daisy Bell (A Bicycle Made for Two)’ and ‘Let’s All Go Down the Strand’.

There’s none of the romance or cohesiveness of the album proper, but – on the original compositions - the songcraft is almost faultless, from the clean new wave guitars of ‘Mace’ to the weirdly successful Krautrock experiment of ‘Es Schmecht’. If the Modern Life Is Rubbish b-sides are the sound of a band coming into peak form as musicians, then Modern Life Is Rubbish is them deciding what to do with that form. Reputedly the band – after their pissiness over ‘Popscene’ – were unfazed that neither their second album nor its singles sold particular well: they knew how good it was, they knew it was only a matter of time before they hit the big time… and they were right.