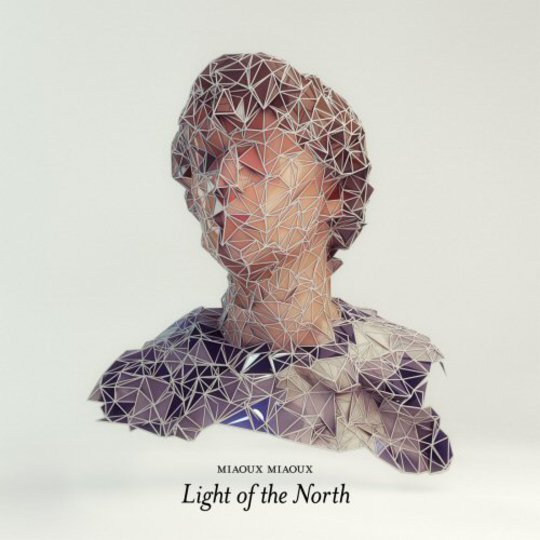 If you’re one of those sorts who like to organise their record collections by genre, you'd best look away now. Light of the North, Julian Corrie’s debut long-player under the Miaoux Miaoux guise, is the kind of album that’s likely to cause genre-junkies plenty of sleepless nights. It’s not that these ten cuts by the Glasgow-based circuit-bender are unidentifiable – far from it – but trying to make sense of where this record sits as one solid mass is no easy task. In fact, it feels almost impossible.

Effortlessly weaving between infectious pop hooks, conscious hip-hop, ebullient African rhythms, arable folk and star-striding electronica (to pick out just a few), Light of the North is an incongruous, ever-twisting musical kaleidoscopic. Anyone familiar with Corrie’s movements north of the border will recognise this inability to sit still. He has, it’s fair to say, form for steering down multiple directions; connecting dots between myriad Scottish scenes and absorbing all that surrounds him before reshaping it to his own advantage.

In most hands, this magpie approach would normally be unlistenable. Yet, a skilled and much lauded remixer, Corrie’s paws are more adept than most; a trait that’s exemplified in his expert massaging of ‘Sweep Clean’s juddering inidietronica and the scattergun glitches of ‘Cloud Computer’s. While this may be his inaugural offering, it’s executed with the trained ear of a musician who understands what he wants and, more importantly, what his listeners want: to dance.

And dance is exactly what this record does. But, given its maker, Light of The North is no pedestrian disco-biscuit-gnawing affair. To really embrace it, to really move to its zig-zagging, labyrinth of rhythms requires a certain kind of patience. Try cherry-picking from its summery branches and the idea of the ebullient ‘Is It a Dream’ living alongside the escalating dance-folk thrum of ‘Stop The Clocks' makes little sense. It has even less effect.

Yet played out in sequence, played out as Corrie meant it to be, and what unravels is a record that can bust a stone-cold, limb-shifting killer like ‘Hey Sound’ before seguing effortlessly into ‘Better For Now’s major-key electro-balladry. It’s no mean feat. And while the closing, slightly tedious, run of ‘Singing In The Dark’ and ‘Ribbon Run’ suggests Corrie’s veneer requires a little polish, ‘Virtua Fighter’s lugubrious beats – accompanied by the debonair rhymes of Profisee – underlines his ability to combine eclecticism and melody without aping a sub-par Hot Chip.

So where should you place Light of the North in your record collection? Even Julian Corrie can’t answer that. But, succumb to the contents of his fine yet indefinable debut, and you’ll soon realise that’s exactly how he planned it.