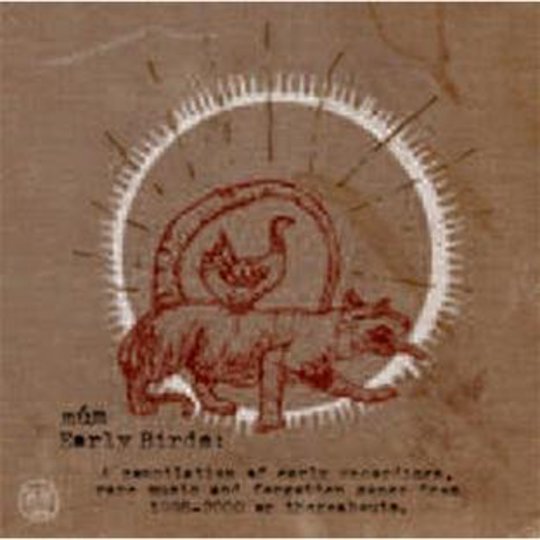 Early Birds is a collection of rarities, unreleased and ‘lost’ tracks by Icelandic electronica experimentalists múm, recorded in the early years of the band’s career. Múm are best known for sweeping, ocean-like epic tracks which pull the listener in deeply: many of the songs on this compilation are rather different to that. This may not appear to bode well for a collection of obscurities which includes some of the first songs the band ever recorded. What if this was just the rubbish they cobbled together before they found their feet? Thankfully this is not the case and Early Birds contains the songs of a band with great promise, already achieving strange and wonderful things. The album is awash with the electronic glitches, occasional distorted vocals, organs, electro-folk and melodies for which the band are well-known, but half of the tracks on Early Birds are surprisingly pop - albeit bleepy lo fi pop. Some could even get you dancing.

The remix track ‘Bak þitt er sem rennibraut (Bústadavegurer fáviti megamix eftir Músíkvat)’ packs more depth than the original, which is also found on the album. It momentarily swoons and scrapes dramatically mid-way through yet it begins in a frantically danceable electro fuzz which is pure pop joy and ends in an even more deranged and infectious rush of guitar and synth. Somewhere along the lines are vocals which sound operatic, maniacal and utterly compelling. It's completely irresistible and feels so joyful and alive, about as far as you could get from introverted ambience. Similar in its awkward pop sensibility is ‘Gingúrt’ which is heavier on the beats, glitches and drums but still full of melody and makes for fun listening. Britney Spears it ain’t, but there’s still much to it which invites bedroom dancing. ‘Gingúrt’ closes with what sounds like an outtake of music from a demented fairground which is appropriate to the sense of playfulness on much of the compilation. The second half of the album is more sedate, introverted and peaceful, but there is still a pop sensibility which means that although perhaps not as enjoyable as the more ‘disco’ half of the album and not as developed as some of múm’s later work, they never err on the side of boring.

As is often the case with múm, vocals are used sparingly on the compilation but when they are it is to perfect dramatic effect, as on ‘Hvernig á að særa vini sína’, a duet between founding múm member Örvar Þóreyjarson Smárason and regular collaborator Hildur Guðnadóttir. The vocals have a ghostly quality, perhaps because they were recorded in a bathtub full of water. The song is pulled together by an infectious riff creating a powerful sense of optimism, despite the down-beatness of the vocals.

What múm produced in their early days is fascinating, but also often fun, vibrant and has the quality of making you feel good to be alive. At other times it’s slower-paced and introverted but that’s still an introversion worth visiting. Some rarities and long lost tracks are rare and long lost for a reason but múm fans should be thankful for the re-issue of these. The band has developed and changed over the past decade plus, but they came from great beginnings and theirs is not a past that should be forgotten.