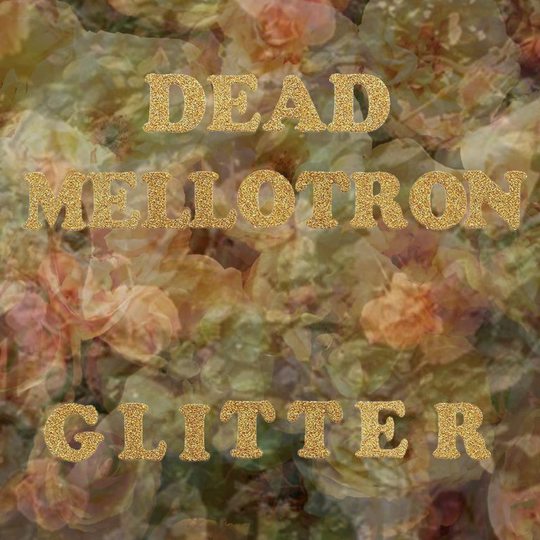 Having initially formed Dead Mellotron as a solo project in his home state of Louisiana, songwriter, musician and arranger Josh Frazier needed a change of scenery to augment a similar shift in direction and dynamic for his project. Relocating to Baltimore shortly after the release of the project's second, self-titled long player two years ago, Frazier subsequently recruited fellow musicians Aimee Bowen and Courtney Corcoran and gradually those missing pieces of the jigsaw fell into place.

Now, having attracted the attention of London-based independent Sonic Cathedral, the third Dead Mellotron record - and first as a full band - is upon us. Although vague in disclosing his influences - "I just play what sounds good to me" declared Frazier in a recent interview - Glitter's reference points are far and wide from the lush ambience of Beach House or Deerhunter to the more euphoric grandeur of M83 or Ladytron. Other comparisons which spring to mind include Ulrich Schnauss and Brian Eno, which, considering Frazier also produced the record himself, is possibly as high a compliment that anyone in a similar position could wish to receive.

Comprising seven pieces in total, Glitter hasn't exactly been the easiest of records to make, having been written, then scrapped and completely rewritten over the space of a year. In some ways incomplete, yet at the same time never outstaying its welcome, Glitter is a worthwhile introduction to the world of Dead Mellotron for those not entirely familiar with the band or Josh Frazier's past wares.

Opener 'Stranger' takes several twists and turns through some parallel universe where M83 has reworked Glasvegas' first record. The sound of seagulls gathering overhead vies for earspace with a choir of Gregorian monks, all the time floating on a breeze of desolate synths and carefully plucked guitars. When it leaves, eclipsing into the pretty if slightly-too-polite 'Can't See' there's little to differentiate between the two pieces other than a mild drop in tempo.

Seguing further into the dirge-like guitar loops of 'Bye' - think Ride at their most incandescent - Glitter takes its most direct path so far, possibly cementing the most suitable route for Dead Mellotron to embark on in future. Disintegrating into a solemn piano-led outro, 'Bye' arguably signifies the most notable five minutes on the entire record. If 'Making Up' acts as a solitary lysergic bypass between the more opulent moments here, then 'Babe' takes off on a similar trajectory to Antony Gonzalez and co.'s 'Reunion'.

'Oohahh' might read as little more than unutterable gobbledygook on paper, but its guitar-heavy pendulum swings from quiet to loud, fast to slow at uncharacteristic intervals before erupting into a grandiose symphonic climax during the final third. Glitter reaches its natural conclusion thanks to the simple but effective double tracked vocals and single note drama of 'Dying'.

While the current penchant for shoegaze-tinged ambient records has created a climate of saturated overkill, there's more than enough here to justify both Dead Mellotron and Glitter's existence.