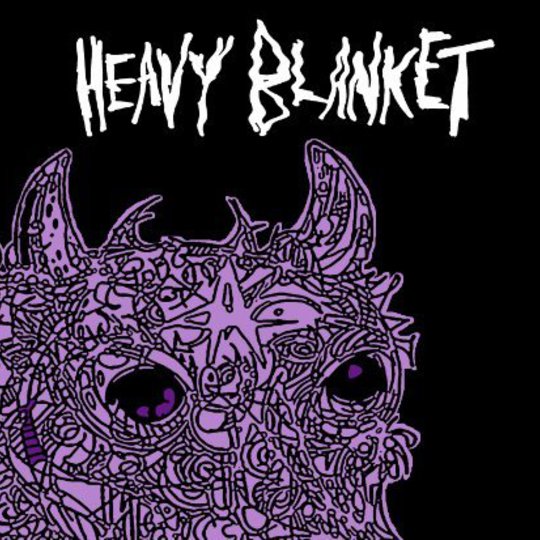 Aside from the obvious reason this Heavy Blanket album exists – as an outlet for Joseph ‘J’ Mascis to throw hard rock guitar shapes even more indulgent and OTT than his other ventures in the field – one wonders if there was a secondary agenda: highlighting the vapidity of modern music churnalism. You’ll get a feel of what I mean if you search the internet for info on Heavy Blanket, and come up with literally hundreds of blog posts and news nibs which all rewrite the band’s backstory, as detailed in the press release. There isn’t anything else to go on, so they pretty much have to, even though it’s clearly all cobblers that Mascis and/or associates invented for their own amusement. Who’s 'lazy' and 'a slacker' now, huh? That’s what the Dinosaur Jr axeman is saying to himself, literally as you read this.

At the risk of merely increasing the parrot chorus, it’s worth briefly outlining the fable of Heavy Blanket, as the very notion should excite most Mascis acolytes. The six songs on here were written in 1984, during the very brief time between J’s hardcore band Deep Wound disbanding and the formation of Dinosaur (later Dinosaur Jr). Heavy Blanket – J plus two long-lost friends from that era, it says here – reconvened late last year to finally record their vision, a vocal-free take on ornery proto-metal and obscure Japanese psych. Anyone holding hopes of the result channeling the uncontrollable pizza-faced nerd rage of Deep Wound may be disappointed: Heavy Blanket is free-ranging and consistently in the red, but clearly the work of an accomplished musician or musicians. Anyone who’s happy to listen to J repeatedly pull his pud for six minutes or so at a time, in a manner laid down on the indie-era Dinosaur LPs and heightened on later solo albums like More Light, is however in for a treat.

Certainly, though, Heavy Blanket differs enough in aesthetic and approach to Mascis’ other outfits to justify a new name. He’s a pretty legendary soloist, at least in indie-rock terms, but his indulgence has most often been balanced with a hummable, MTV 120 Minutes-broadcastable tune. This is essentially 37 minutes of solos. Sure, there are bass and drums – both rangy and crypto-jazzy – but it’s every bit as much a guitar fetishist’s album as those Satriani or Vinnie Moore records I KNOW you’d never rep for. It’s way more fluid and less sterile than any of that, though, don’t worry.

Sometimes, like the opening ‘Galloping Toward The Unknown’, it’s as if Ted Nugent had been inspired to re-record the Rangda album from 2010, removing all the suspicious ethnic influences. (Hypothetical redneck racism sounds pretty smokin’, sorry to inform you.) In a similar vein, anyone missing Comets On Fire and their whammy bar meltdowns ought to jump on this, or they could stack it alongside the still extant, still excellent Earthless. The Groundhogs at their heaviest, which is probably the Split album, seem like 40-year-old precursors; the shadow cast by Hendrix scarcely needs pointing out. There might be some Japanese gonzo-psych like Mainliner in there – eyes-shut wailers such ‘Corpuscule Through Time’ are every bit as phallic and proud – but overall, this’ll be way more easily digested by trad-minded hard rock consumers.

Even if J Mascis records more Heavy Blanket albums, the project will likely remain a curio in his catalogue, lauded by some as a showcase for his monstrous guitar chops but by more as a symbol of his freedom. He’s got three decades of band experience behind him now – if he can’t be permitted to do things like this, well that’s just fascism, pal. And if you like the sound of the guy’s guitar, basically every minute is as good as the next.