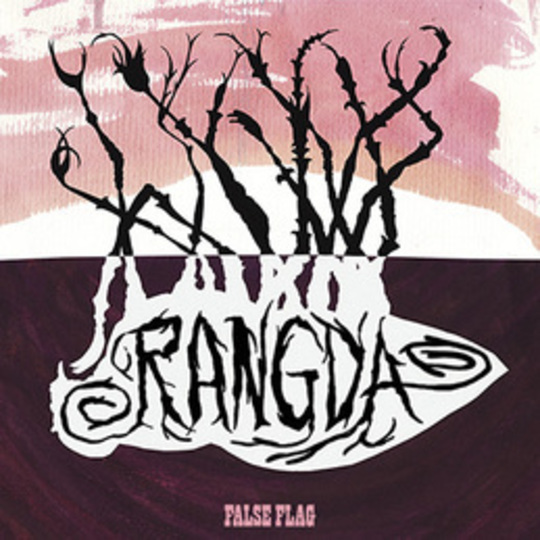 According to Balinese mythology, Rangda is the name of a child-eating demon who inspires equal levels of terror and devotion, representing evil incarnate but also providing protective force for those who choose to invoke her. It’s also the name of Ben Chasny, Sir Richard Bishop and Chris Corsano’s new project, and the same unstable morality recurs again and again across the course of their debut False Flag. Across six tracks, all three shift back and forth between modes of play, drifting through directionless expanses of melody into bracing walls of feral aggression.

Anyone at all familiar with the work of the musicians involved should know what to expect. Indeed, it’s hard not to wonder whether to describe a group as greater than the sum of its parts is appropriate, when each individual component of the machine already boasts such an impressive track record. It’s certainly true to say that even when approached with naïve ears, False Flag bears distinctive clues as to the provenance of its creators; the billowing folk forms of Chasny’s Six Organs of Admittance gather and take shape during the mid-album respite of ‘Sarcophagi’, whilst the following ‘Serrated Edges’ hints at the dessicated blues churn of Comets on Fire circa Blue Cathedral. Bishop’s arabesque guitar cycles take subtler shape than in his solo work but retain the same delicately sensual modalities, and as ever Corsano’s presence is impossible to ignore, his drum patterns consistently morphing from restrained abstraction to volcanic fury.

So far, so unsurprising. Given the pedigree of all three, Rangda’s music was never likely to disappoint. Yet at its best, False Flag touches on something entirely separate from the previous work of all three, approaching a bleak and desertlike transcendence far removed from the woody feel of Chasny’s recent Empty The Sun opus. It helps that the sequencing is marvellous. Appropriately for a largely improvised record with a hasty gestation, False Flag sounds like nothing less than the document of a band discovering themselves, learning to work with the quirks of one another’s playing as they go. So it’s entirely fitting that it takes until 15-minute closer ‘Plain Of Jars’ for all three’s characteristics to fully meld together into something approaching a definitive Rangda sound. When they do, it’s spectacular. Opening with a wispy Middle Eastern guitar melody, it gradually layers up over time to reach a series of ever-escalating peaks, interspersed with a hugely inventive array of percussive timbres from Corsano. The overall effect brings to mind some monumental natural phenomenon, building in power until it finally breaks and spills over.

Which is not to say that there aren’t plentiful rewards to be found elsewhere. Opener ‘Waldorf Hysteria’ is pure sonic abrasion, all three adopting a scorched-earth policy that functions as a palette cleanser of sorts. Both ‘Fist Family’ and ‘Serrated Edges’ live up to their names, scratchy drum ‘n’ fuzz workouts that nonetheless achieve the same rapture you might experience in the eye of a storm. But it’s the more considered moments that offer the most tangible pleasures. Brooding war march ‘Bull Lore’ is particularly impressive, Corsano’s sudden bursts of machine-gun fire reimagining the country-fried grooves of Earth’s recent output as rallying cries to battle. Repeated listens open up further depths than False Flag’s swift conception might suggest – but there remains the nagging feeling that Corsano, Chasny and Bishop have only just begun to mine Rangda’s potentially rich seam. Their live shows later this month should be well worth witnessing.