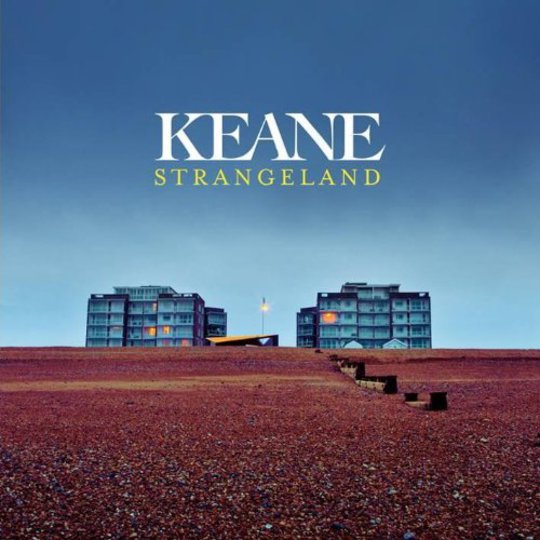 Look, you might just have to give me this one. There are times when life in the city all gets a bit much and your ceiling falls down and you're donating your entire life savings to TFL to get to work and Boys Are Rubbish and you just want a hot chocolate and for someone to tell you 'there there, it's okay' while patting you on the head like one of those ridiculously fluffy Crufts dogs. Yes in this scenario I am the fluffball pup and I am guzzling the cocoa (despite chocolate apparently being death to dogs but WHATEVER IT'S A METAPHOR) while in the background we have The Keane's newest effort Strangeland, trying to be one of those reassuring pet owners.

Keane do what they do, namely Treatises On The World At Large, Set To Anthemics, and, generally speaking, do it rather well. They have also tried so many tacks and still sold a gazillion copies that by this stage they've pretty much earned the right to do whatever they want, and, well, complaining about it is probably a bit pointless. Under The Iron Sea's narrowly-averted attempts at slaughtering each other in song is still, I think, one of the last decade's more underrated albums for Tim Rice-Oxley's most passionate (and occasionally vicious) lyrics. Perfect Symmetry, meanwhile, was pure sparkly mayhem, derailed by going one song too far rather than playing it safe. And that is what makes Strangeland oftentimes frustrating: knowing that actually, Keane are capable of making genuinely interesting pop music, more than many of the contemporaries they get lumped in with, yet here they've taken several steps backwards.

Calming it down does mostly work; the album's tales of growing up in small towns probably would not work quite so well if there was some electronic demon monster all over their boink. With the overarching theme of friends pulling each other out of strife, Rice-Oxley's lyrics are at their most contemplative here, the likes of 'The Starting Line' imploring the protagonist to "ignore the ghosts that make you old before your time".

There is a formula to the standard Keane hit: verse+bridge+chorus+Chaplin soaring vocals+GINORMOUS MIDDLE EIGHT=anthem klaxon. There are no less than six songs in the first seven that match this exact formula, the exception being the verging-on-maudlin 'Watch How You Go', in such a weird place it almost kills the album stone dead before it gets going. Songs like 'Sovereign Light Cafe' are clearly supposed to be the megahits, but there's just nothing here that matches 'Everybody's Changing' for group singalong wallop, although 'Disconnected' arguably comes closest. In attempting to bring back the slow-burn-much-loved song to appeal to the attention-free Twitter crowd, they often end up not quite achieving either. They're still hardly terrible pop songs, but it feels slightly too easy, slightly too much like they're resting on their laurels.

The second half is where the more interesting, subtle and, ironically, catchier stuff lurks: all of a sudden the Keane I've always liked emerges. The fellows who know how to write a pop song, but aren't afraid of being just a little bit weird with it. 'Black Rain' has something of Bjork's 'Hyperballad' about it - bass beat, synths and a Rice-Oxley/Chaplin falsetto-off; it is the album's most intriguing song by quite some distance. 'In Your Own Time', meanwhile, is an understated pop gem, possessing a sneakily brilliant earworm in its "I say nothing/You say nothing" hook. 'Neon River' tells the sorry tale of a fellow who missed out on love, friends and all of life because he was too scared to venture out of his comfort zone. 'Day Will Come' finally hits the upbeat tempo/murky lyrics sweet spot with its "Some days set your world on fire/Some days they sink like stone" chorus. And closer 'Sea Fog' is Keane at their distilled best and sticks with you long after the final notes.

It's difficult to fault the individual songs that make up Strangeland, but it all just feels a little too much like a studied career move for a band who, for all the flack they've taken, have up to now gone out of their way to challenge people's perceptions of them. And, more importantly, challenge themselves. Keane are, in this writer's opinion at least, underrated; but Strangeland feels just a bit by the numbers. If every now and again you just need a big comfort blanket of an album, the last thing you want is a comfort blanket that feels like it’s going through the motions.