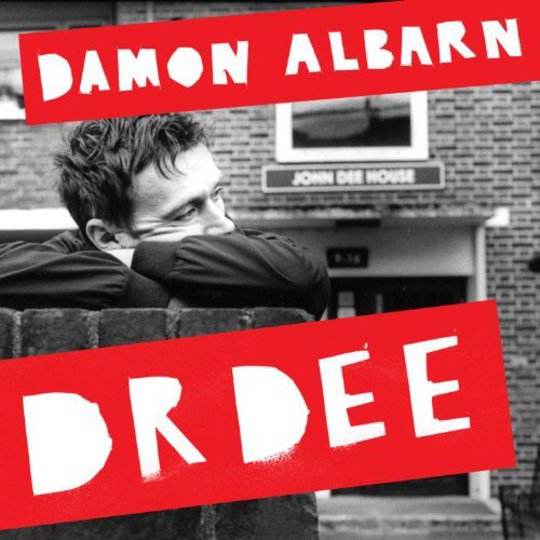 A funny thing about Damon Albarn's solo debut album Dr Dee is how the black and white cover photograph of Albarn looking a bit wistful and singer-songwritery next to a wall is exactly the sort of thing that somebody in 1995 would have guessed would be on the front cover of Damon Albarn's debut solo album.

But this is 2012 and if the last 17 years have taught us anything, it's that the days when Albarn might have been interested in putting out a straight down the line set of Kinks-indebted introspection have passed. And thus it proves: beneath that conventional exterior, Dr Dee is in fact a collection of songs taken from Albarn’s bucolic folk opera of the same name, a work about the life and times of Elizabethan mathematician and occultist John Dee.

It’s something of a surprise that this is the first record serial collaborator Albarn would choose to put out under his own name (2003’s demo set Democrazy excepted). It’s all written and produced by him, but there are a multitude of other musicians on board - notably opera singers - and he only contributes lead vocal to perhaps a third of the record. Probably it's an opera thing, although I can’t help but wonder if Parlophone – who have admittedly stood by Albarn through odder projects – might had some hand in packaging Dr Dee to look as little like a bucolic folk opera about an Elizabethan mathematician and occultist as possible.

That accepted, we’re not exactly talking about Der Ring des Nibelungen here. Instrumental opener ‘The Golden Dawn’ is lovely, mounting, melodic layers of pump organ building from gentle rivulets to a stately torrent, like an English parish vicar taking a stab at drone music. And track two, the equally lovely ‘Apple Carts’, could almost be a straight up single, a finger-picked folk pastoral with just a hint of Wicker Man creepy faux innocence. It’s a bit too fey to stand much chance of hoovering up the neo-folk dollar, but it is a reminder of how beautifully pure and yearning Albarn’s voice can be, and will probably hook in a few Blur fans who’d assumed this whole record was going to be totally obtuse.

After the speedy up/slowy down organ at the start of ‘Oh Spirit Animate Us’ there follows a pretty, acoustic Neil Young-esque bit sung by Albarn. Then a soprano cuts in and we’re in opera territory.

Opera territory-ish, anyway. The music is essentially a very English sounding folk with a touch of West African instrumentation; the non-Albarn singing is closer to Elizabethan polyphony than the Italian model of opera that largely sprang up after Dee’s time. Nonetheless, the waves of mannered, classically trained voices are about as indie rock as a white tie ball and though Albarn continues to crop up – the Syd Barratt-eque ‘Saturn’ and handclap-laced ‘The Impossible Dream’ could both be from that hypothetical straightforward solo album – he’s one voice among many.

The vocal interjections from the opera are the most difficult element of what is essentially a charming semi-instrumental folk record. There is absolutely no way in hell that you’re going to work out the plot of the two hour long opera from listening to this 48-minute album, and at times there’s a somewhat jarring randomness to the sudden rumbling interjection of a baritone or melodramatic sweep of a counter-tenor. Outside of the context of the opera itself, it’s only Albarn and the more choral elements of the vocals that really make sense here. Certainly it doesn’t have the sense of completeness of the last notable indie/opera crossover, The Knife’s monolithic Tomorrow, In a Year.

Still, Damon Albarn is pretty much the king of enjoyably tangential projects, and to say that this is a less essential record than Parklife or Demon Days would be to miss the point. Dr Dee the opera is the major project (it comes to the London Coliseum next month). Dr Dee the album is the latest in a stream of semi-under the radar releases that follows The Fall, Kinshasa One Two and Rocket Juice & The Moon, records that exist because Damon Albarn is relentlessly curious and not desperately in need of the cash. So here’s his sweetly sinister Renaissance folk-slash-opera record, and if it’s not a masterwork it’s an evocative accompaniment to a summer’s day, a sporadic but persuasive reminder of how spine-tingling Albarn’s voice can be, and yet another musical genre ticked off his list with studious accomplishment and loving care.