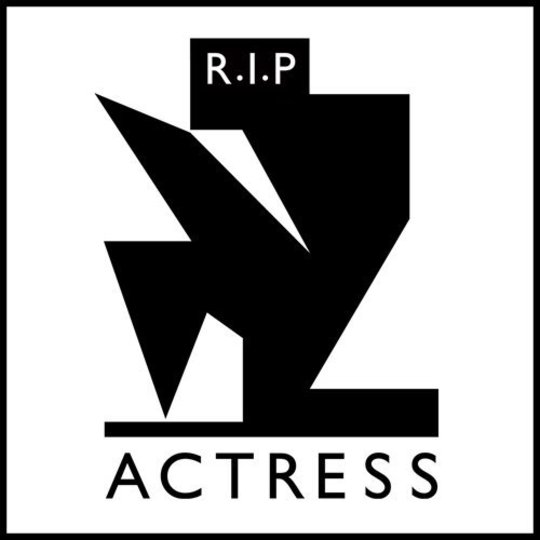 When Darren Cunningham, a.k.a. Actress released a 12-inch of two tracks at the tail end of last year, the two vastly different pieces of music gave little suggestion as to the nature of the long promised follow-up full length to 2010’s fêted Splaszh. ‘Rainy Dub/Faceless’ came a full nine months after his previous release, a similarly schizophrenic 12-inch consisting of the of glitchy, restless techno of ‘Harrier Attk’ and the slo-mo hip hop beat of ‘Gershwin’. The first side (‘Rainy Dub’) was a instantly memorable, grim, monotonous take on digital dub, relentless in its minimalism, whereas the reverse (‘Faceless’) found Cunningham in a more playful and experimental mood, splicing together minimal washes with creaking, gurgling and oddly funk laden synths. The two releases intensified, rather than diluted, the mystique surrounding a future full length, so diverse and unrelated were the sounds coming out of his studio.

Fast forward four or so months and R.I.P. has landed, amidst confusing press releases which led many to assume, if even for a split second, that Cunningham had passed away. And in some senses, it feels like he has, listening to R.I.P. the first time through. Immediately, the listener is struck by is how vast, empty and abstract it sounds when compared to his previous work. Certainly, previous changes of direction should have cushioned the shock somewhat, but R.I.P. almost feels like another artist entirely in places, opening as it does with an entirely beatless drone far removed from the pulsing tracks we've become so used to.

It was the way that Cunningham made his sharp, four on the floor beats resound against the more fluid structures on top of them which gave him such an inimitable style: here, it takes until the fourth track for a truly driving beat to work its way to the fore. Yet even at the album’s most abstract moments, there’s often a pulse throbbing beneath the surface, that same sound of club music heard from outside a club that saw Actress lumped in with dubstep for better or for worse. ‘Ascending’ is sonar for underwater dancefloors, its heartbeat masked within waves of shifting, intangible synths; ‘Holy Water’ twinkles, bleeps and chirps in rhythm like an overloaded equaliser console, LEDs going haywire across the board.

Time signatures aside, no Actress record thus far has stuck to any kind of a template, and R.I.P. once again treats us to a smorgasbord of tones, stylistic lurches and criss-crossing ‘genres’. What marks R.I.P. is that these are amongst the record’s most striking successes, rather than diversions for the sake of diversity. The music-box electronica of ‘Jardin’, a stiffly turning mechanical ballerina, echoes some of the work from contemporary and sometime colleague Zomby on his recent major label debut: a classical turn from a modern electronic artist. But where Zomby grafted a piano piece wholesale onto the end of his record, Cunningham prefers to treat even his classical source material with the same rigour as the rest of his tracks, cutting minute slashes of static through a delicate, meandering melody.

‘Serpent’ takes a few tricks from Shackleton’s box of oriental riddim, turning reedy eastern melody into the closest thing the record has to a thumping floorfiller, before overlaying more and more synthetic stabs until the track disintegrates under the weight of its own recurrent 4/4 beat, grinding to a sudden halt. ‘IWAAD’ could almost pass for deep house, a rare vocal sample stranded under the murk of those atypical shuffling, booming basslines. ‘Raven’ is a lullaby disguised as bump’n’grind; while two hands in the air club thumpers (‘Caves of Paradise’ and ‘The Lords Graffiti’) bring up the album’s rear, reminding you that Cunningham can still choose to bring the heat if he feels like it.

Whilst Cunningham was always more markedly cerebral than some of his compatriots, here he flaunts it to a greater degree than before, which initially masquerades as giving the album a more subdued tone. There’s little that’s static or purely reactive about R.I.P., each track carefully layered, shifting and twisting before the listener can entirely grasp onto something as simple as a theme or a motif. ‘N E W’ is full-blooded electronic composition, ebbing and flowing without the need for the comfort of a 4/4 beat; ‘Glint’ is mere shards and fragments moulded into harmony. In the hands of a lesser producer, such slipperiness might come across as hyperactive, yet here it’s a key component in keeping the album not just innovative, but more importantly interesting.

If Splazsh was a shot across the bows, R.I.P. is a requiem for the scene that Darren Cunningham never really was part of. It is in many ways the album he had to make, not simply an extension of the ideas daubed and flacked across Splazsh’s cross-cutting canvas, but something altogether more abstract and panoramic. R.I.P. suggests even the generally applied ‘basshead’ label for Actress’ music is too constrictive: what Cunningham is making now does more than just stray into areas such as modern classical, the many strains of noise, and ambient. R.I.P. is the most fully realised, ambitious and rewarding project that Cunningham has yet put to record, and those who appreciated Hazyville and Splaszh will be well aware of what high praise this is. What settles this assessment of quality, above all, is the overwhelming (and frustrating) feeling that a review such as this can barely scratch the surface of something so simultaneously esoteric and enjoyable. To call it album of the year at this stage wouldn’t so much be pre-emption as an actual understatement.