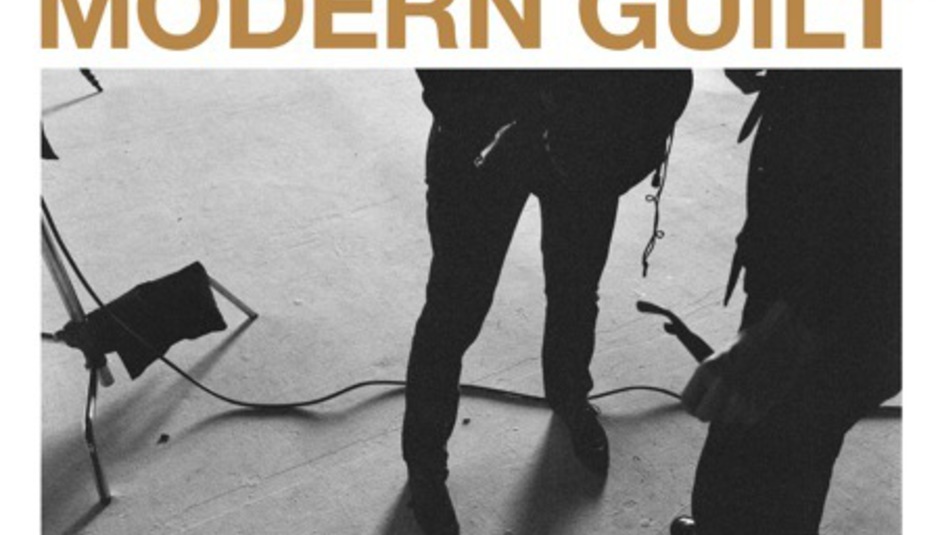 This afternoon, DiS popped over to the XL offices in Ladbroke Grove, West London, to have a listen to the new Beck album Modern Guilt, which will be released on July 7th. Artwork, pictured above and the very first press reaction to the record below...

DiS was left in a room covered in M.I.A. posters and the stereo cranked out this Danger Mouse-produced album for 33 minutes. That’s 33 minutes. Short, yes? Here’re our first impressions…

Random lyrics: "Come on little Gamma Ray, you're standing in a hurricane..."

Random lyrics: "I'm a pawn piece in the human geee-noo-ome…"

Video: 'Modern Guilt' live at the Echo in LA, June 9

Opens like Justin Timberlake and the bass grinds like a vanilla ‘Milkshake’ ‘til some Kraftwerk keys come dripping all over the place like the record’s about to turn into a Fabric remix album. It’s easy to imagine The Field doing an amazing remix of this.

Random lyrics: "My body can't get no relief…"

Sounds like a single. Somewhere between the glossy-dirty shuffling of OutKast's _Stankonia _and something the Police might've done.

Random lyrics: "Hey, what you gonna do, when there're bombs falling down, falling down on you..."

A slightly downbeat affair, but with more rapid, skittering drums. Like much of the record so far everything is cut and pasted so quick that it hits like Kid606 or Squarepusher. Think_ Kid A_ off his tits!

A riff romp. Imagine a supergroup of The Stones, The Roots and Queens of the Stone Age, kickin' it like Run DMC never happened.

More robotic, but still with drums chasing a runaway train and big woo-doooh-oooohs giving this distorted party jam a chorus before it breaks down to acoustic guitars, before picking back up like this:

No sooner has it seemed to have got started, it ends. ‘Volcano’ is a ballad, a little like a cranked-up track off of Sea Change with little static-y pips amongst the beats.

Random lyrics: "It must be illusions that keep me alive… There's a ghost in my heart, that's trying to see the dark"

In conclusion: the record does sound great, with lots going on - far too much to take in on a first listen. Beck and Danger Mouse have done themselves proud. Expect some of the sound bite reviews in music mags to call it "The Neon Album", and we imagine the record will be mashed into many new shapes and forms on The Hype Machine before too long.