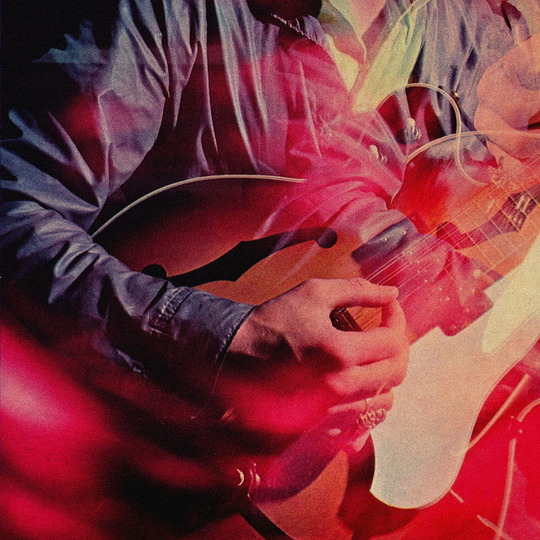 Fast forward. Pause. Rewind for five minutes. Stop. Fast forward some more... And so here we are, in a time defined as post-Drive, where the terms Drive-esque and Drivian are already driving me crazy; so I can’t imagine how maddening it must be for Italian’s Do It Better label co-founder Johnny Jewel, who mixed the film's soundtrack (after the soundtrack he composed was scrapped!). If you're not already hip to his work, Mr Jewel is some sort of prolific super-dude. He was the producer of Kill For Love and is a member of Chromatics, as well as Glass Candy and Desire. The latter’s ‘Under Your Spell’ features on the Drive soundtrack - it’s the one that goes “I don’t eat, I don’t sleep, I do nothing but think of you...” - yeah, that one! Those opening pulses of the movie, that’s Johnny/Chromatics too, and although ‘Tick of the Clock’ doesn’t feature here (or possibly it does half-way through ‘Broken Mirrors’), a few variations on the theme do, but we’ll get to that.

Rewind. It’s several years since the Italo Disco ‘movement’ slouched into the consciousness of the Bloggerarti and The Style Press. Judging by the digitized squeals of excitement surrounding this release, the genres retro-future renaissance couldn’t have come soon enough. This soft, de-saturated disco swirled like oil rainbows and defined a summer, so it seems only natural that Italo Disco finally garnered some mainstream-ish recognition with a film like Drive. In fact, these hipster hymns with their vintage synth sound, are quite possibly the most perfect soundtrack for these insta-filtered days we’re living in, in which authenticity comes from things like fake smartphone filters. These are the days, my friend, and this is the time of future’s past...

Much like Cut Copy’s Zonoscope, which did a fantastic restoration of Eighties electronic party music, replicating New Order and othersuch future-gazing artists, and projecting their view then of The Future (i.e. now), onto the canvas of the sounds of now, which knowingly harks back to then... Like a reflection of a reflection in a dressing table mirror... Like machine distressed 'vintage' jeans... Similarly, Chromatics have gone for a more tender update of early Eighties electro, using silky synths^^ to displace us and our ability to ‘date’ their music to a particular era. It’s this aura of a timeless era which provides a semblance of authenticity, as well as, ironically, making it sound uber now. Which is why 'Italo Disco' was so potent when it took centre stage of the Eighties-esque Drive - a movie with Dune pink hues, Beverly Hills Cop high-tops and that street-lit, end-of-times vibe which hung ominously in the air of the Sega Saturn edition of Fade to Black. Although how so few movie critics picked up on the obvious Double Dragon reference with that jacket, I’ll never know. But I digress... (Pause that thought.)

As I was saying, Kill For Love is the perfect soundtrack for our ‘modern’ lives. As we stumble into a decade that due to distractions like natural disasters and scandals, doesn’t seem to have a name^ agreed upon, people are quickly trying to play catch up and define ‘us’. Perhaps this is why things feel weirdly timeless right now, with music and technology constantly flipping between the extremely retro (Adele, Mumford, Ariel Pink, LDR) and the space-filled future (Burial, SBTRKT, the xx). And this is why Chromatics feel perfect for this point in time, somehow flitting between the bosom of a past, but right at the axis of that moment when western civilisation/Hollywood was obsessed with The Future/Now. Don’t get me wrong, this isn’t some ultra-nostalgic Prince tribute movement, cooing for those spaces between Michael Jackson’s finest beats, nor is it meaning to be a neon sign that says 'post-modern' (well, at least not in some forced manifesto-led way). No, Kill for Love isn’t any of that (probably). This is just the sort of the bath Johnny Jewel runs, and who doesn’t want to bathe in sumptuous synths which seem to gently bump ‘n’ grind the groove?

So as we fast forward and stumble into this undefined era (i.e. now), which isn’t quite the future we were promised, where retro tropes seem ever so prevalent, it seems fitting that our headphones should be fizzing with a half-awake cover of ‘Hey Hey, My My (Into the Black)’. Opening your album with a Neil Young cover should be sacrilege. It really is a brave decision to cover it, record it, rename it ‘Into The Black’ and put it as track one on your album, but it’s a decision that Chromatics pull off with such breath-snatching grace that it makes you half-forget the original was one of the greatest songs of all time, never to be tampered with. Pause. Rewind. Hang on a minute... Is this just the sound of then upgraded, then? No, not really.

“Oh bliss! Bliss and heaven! Oh, it was gorgeousness and gorgeousity made flesh. It was like a bird of rarest-spun heaven metal or like silvery wine flowing in a spaceship, gravity all nonsense now.”
Alex on listening to Beethoven's Ninth Symphony from Anthony Burgess's A Clockwork Orange

As the guitars twang and linger (but never outstay their welcome) Burgess's words are what I would be writing right here about Kill for Love, if they hadn’t already been written so perfectly. Sure, it’s over the top, but this is an album that deals in grand expanses, where subtle things become truly epic... It isn't so much an album that wraps you in a blanket of sound, moreso it kind of stands there, eying you up, in a night dress...

There are nods through pops past peppered througout the record. ‘These Streets Will Never Look The Same’ for instance, has that same stream-train-pulling-into-town air as Stevie Nicks’s ‘Edge of Seventeen’ that was transfigured in Destiny’s Child ‘Bootylicious’, and it's at this moment (when listening chronologically - imagine that!) Kill For Love takes a slightly subdued verging on self-indulgent nose-dive, following five of the finest songs committed to tape, and fired into my inbox in as long as I can remember. The album’s title track scratches and thrusts, indulging you in sumptuous synths the Thin White Duke would approve of, while Ruth Radelet’s voice - that’s so central to this sound - coos and the rhythm keeps stacking up, and up, and up until it releases you from its grip in some overblown crescendo of the sort we’ve come to expect from M83. Then there’s ‘Back from The Grave’ that has a shy Scandi-pop vibe (Erland Oye will be sampling them ooh-oohs, for sure!), while the guitars on ‘The Page’ wander up to their neck in the dark waters of Interpol, Colder and Kate Wax, before ‘Lady’ drops in, and is quite simply cool-as-fuck. ‘Lady’ has these noises that sound like a spaceship scratching the surface of some far out planet, teasing its inhabitants, but always keeping itself slightly out of reach, threatening a treat, never quite erupting into the full-blown dance anthem that it could be, instead choosing to sway in the shadows with Matthew Dear and Austra.

These opening six songs are as good as it gets, and if there were four or five more, this would be the album of the year, for sure. Not that what else here is sub-par, it just never quite reaches the same dizzying heights. If you want to be deeply indulged ‘Broken Mirror’ is utter bliss, it throbs and gently judders along, until ‘Candy’ coasts Nico in on the breeze, all slightly out of key and lacking the true masterclass in that came before. Meanwhile, ‘Running for the Sun’ sounds like a respectful call and response track to last year’s Bon Iver album, for which Kill for Love could neatly sit beside as a companion piece, should you ever need to explain what music was like this decade. And there are more songs, each with their own ‘cinematic’ textures and Drive-esque vibes.

Short-hand descriptors like sigh-fi and these obvious but scattergun embellishments about movies only go so far in capturing the essence of this record. Sure, films have a texture and a visual which works wonders for quickly communicating in a tweet-length manner what you can expect, should you choose to invest your time in an album. Sure, the siren's call of Drive and its ‘cool’ atmosphere, will bring a few people to this party, but this was an album that was originally 36 songs in length, cut down to just 17 tracks, which were written around the same time as some of Johnny Jewel's songs intended for Drive, but this isn’t that film soundtrack part two or the prequel or whatever. This is oh-so much more than that, both in terms of scale and ambition, as well as how it plays with time and rich textures. This is a modern masterpiece, it’s as simple as that. So let’s kill the lights. Fade to black.

^ = I’m calling this decade The Elevensies, as that’s the best time of day to distract social media-ites from their ‘work’ to read DiS, and it means we’ll look back at now as being quite quaint, rather than full of upheaval, unrest, and mental right-wing lunatics.
^^ = these could easily be emulated 'vintage' synths, created by plug-ins. I can’t be sure and I couldn't care less, and that’s part of the charm of future’s past: what is real is 4REAL or The Real isn't a question nor a challenge any longer, it just is, and it doesn't matter if it's real or fake because everything's faux-real and if anything, the faker is seems, the more real it becomes and the sooner we all succumb to this, the better (probably).