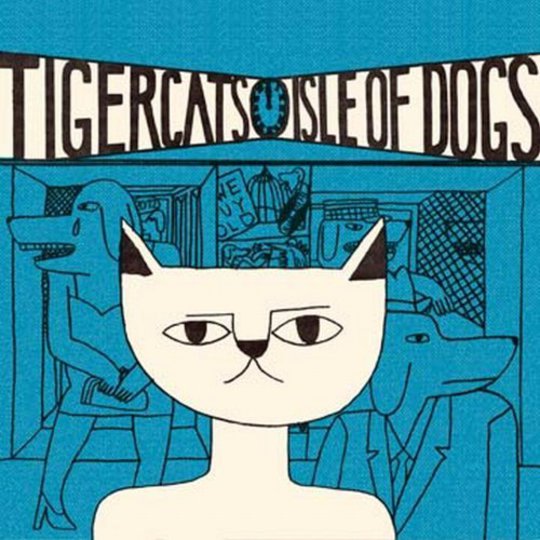 In what’s got to be the tweeist marketing move this year, the 12-inch of Isle of Dogs comes with a free cupcake recipe and bag of chaigercats tea. If that doesn’t tell you everything you need to know about Tigercats their Bandcamp will: the East London five-piece play sex-starved indie rock, citing Hefner, Harry Nilsson and Allo Darlin’ as influences. That’s no bad thing (certainly Hefner weren’t famous enough the first time round), but to enter the world of Tigercats is to be part of a Richard Curtis film, where London sparkles with backslapping greengrocers, and you can look like Hugh Grant and get away with it.

But if you’ve got the stomach, or you’ve been on an indie crash diet and now want to gorge like a Roman, they’re irresistible. Duncan Barrett’s acidic sweet nothings show he’s had his heart mowed over more than once, and the way he recounts it over chiming guitars shows he could be the last fan of McCarthy, forgotten heroes of the C-86 scene. In fact, he almost mentions them on ‘The Vapours’, which is filled with so many London idiosyncrasies it should be part of the UCL freshers’ pack. ”I dream of you / In an imaginary record shop / Staffed by new-wave one-hit wonders / We got Jona Lewis / We got Jilted John / We got the Only Ones / We got the guys of Saturn and Japanese / I think it was the Vapours”, he howls in his best Darren Hayman, sounding like he’s from the same era as his idol, as if somewhere in Limehouse there’s a pavement wormhole a la Goodnight Sweetheart. ‘Harper Lee’, another anthem two years too late, is the type of cuckolded punk track that could’ve capped off The Inbetweeners, while ‘Konny Huck’ features the bass line of the year, and - if only it was older - might be the song Charlie Brooker used to woo his missus.

In fact, once you get past Isle of Dogs’ obsessing with the tube map it’s an album that could woo more than just Londoners: Tigercats mewl till you can’t help but fall for them, irresistible as Supergrass in pin-badges. On the few times they sour - ‘Kim & Thurston’, where they shepherd home the drunk virgins, or ‘Jonny’ where keyboardist Laura swallows pills to blank out her man - they sound optimistic, full of more beans than a bath on Red Nose Day. ‘Banned at the Troxy’ sees Barrett test his smut around some baggy lines from guitarist Stefan, singing ”Do you remember 2004 / We used to dance till we could dance no more” and possibly referencing the green Alligator pills that were going round the city back then. By the time they reach re-recorded single ‘Easter Island’ they’ve left the M25 altogether, Barrett recalling his GCSE years where the girl he was working on suddenly bolted.

That’s probably the audience Isle of Dogs will most captivate: not Londoners, but sixth-formers still in the sticks who’ve yet to be ground down by the city. Despite its corduroys and references to authors there’s something unconsciously authentic about Tigercats - they know their sound, and sprinkle out the self-hate in strong enough doses to convince you they’ve felt what they’re singing about. Whether the passion’s here to make you confront your teen fumblings is another matter, but with singles like the flighty ‘Full Moon Reggae Party’ and its pumping cat animation it’s hard not to be swept along. Given time, this could be a band to listen to obsessively, and not just if you need to feel frisky while scooting around in Zone 2.