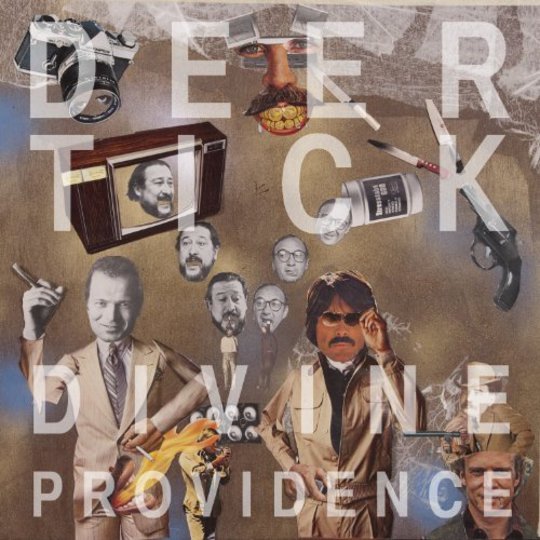 From the outset (‘The Bump’), Deer Tick set themselves up as a newly rambunctious bunch. “We’re full grown men / And we act like kids,” they growl, before you’ve even had a chance to shake their hand. They introduce songs by saying “you fucking douchebag” and, frankly, you can smell the testosterone a mile off.

Admittedly, this is Deer Tick kicking loose a little and busting out of the alt-country / folk / blues mould that they had restlessly settled into. Divine Providence is more of a bar-room brawl than it is an album. You’ll need to leave your inhibitions at the door with this one, because beyond the stench of testosterone, just past the upturned tables, sticky with whiskey and blood, there’s a pretty fine album lurking here.

On this, their fourth studio set, Deer Tick have decided to reference a kind of rock and roll that doesn’t get talked about any more. It doesn’t wear a leather jacket, it doesn’t get played in clubs, it’s old enough to be your uncle and it generally only sees the light of day in our culture of today if there happens to be a Rolling Stones documentary on. It’s the kind of rock‘n’roll that’s peddled in dusty corners by Chuck Prophet, or Max Décharné’s Flaming Stars.

It’s a spit‘n’sawdust kinda rock and roll, drunk to the point of incoherence, hungover to the point of incompetence and enjoyable beyond belief, if you allow it. Don’t come searching for complex emotion or intricate compositions; you’ll walk away from this joint feeling short-changed. If you wanna holler along about Johnny having a bottle of wine and not being able to make it to work on time and pretend you’re listening to Exile-era Stones, at break-neck speed, though, there’s something on Divine Providence for you.

There’s a pretty strong sense that the recording of this album was powered by severe alcohol related depression and paranoia; of the type that you can only achieve after you have drunk yourself blind in at least one of your eyes and been sick on yourself and the person you were trying to seduce. The tone reels from trashy, hyped up honky-tonk sing-alongs, dips down to hangover regret ballads, such the Paul Westerberg-esque ‘Now It’s Your Turn’ and back up to the boozy, Dylan-lite of ‘Miss K.’

Deer Tick set out to make an album that replicated the energy of their live performances. Re-inventors of wheels, they are not. Setters of trends, they will not be, with this offering. Providers of mindless, chaotic R&R, they most certainly can be. “I don’t have to be a hero / I can just walk these streets.” Fair dos. Ambition’s over-rated anyway.

Pop Will Eat Itself at The Rescue Rooms, Nottingham, Nottinghamshire, Wed 21 Mar