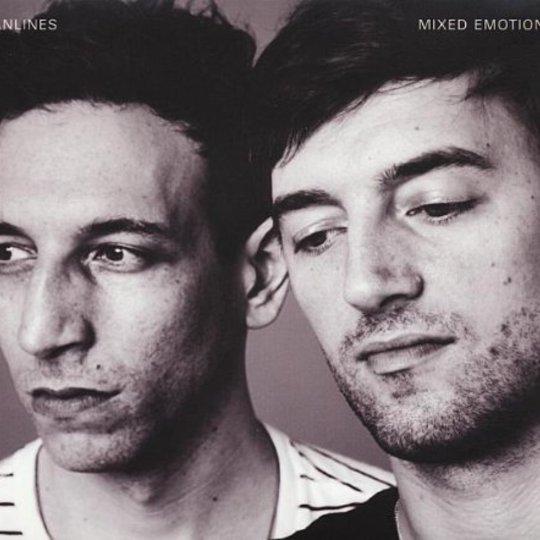 Mixed Emotions is an apt title. The long simmering debut album from Brooklyn-based duo Tanlines, it offers an arresting mix of pleasant sounds and vague, disparate feelings. There are no anthems, no catharsis, simply a collection of songs that skirt anxiety, yearning and muted joy. Mixed emotions.

This is an album that starts assuredly, with an opening trio of hooky, warm songs that feel danceable in a familiarly lazy, sun-drenched way. The sound here is not far removed from that of their debut EP, Settings, a sparse arena of tender synths, comfortably repetitive drum patterns and plaintive vocals. For now, Tanlines are not pushing boundaries, but they’ve carved out an agreeable niche in the vast, wide country where indie pop meets bedroom electronics.

Despite Mixed Emotions' relatively limited palette, it serves up 12 songs of surprising depth and variety. Only one track, the well-travelled ‘Real Life’, has been released before (sadly, only the original version appears here, and not the fantastic Memory Tapes remix). This record can survive a fair number of listens before it starts to get tired.

Lyrically, the themes covered are nothing you wouldn’t expect. As seems fitting, they’re quite vague – by and large, musings on old friendships and the way we change as we grow old. Vague doesn’t mean rubbish, however. Indeed, the deceptively simple chorus of ‘Real Life’ - "you might think I’m still that way, it’s only natural, it was a past life thing, it wasn’t anything at all" is moving as ever. Meanwhile, opening track ‘Brothers’ repeats the line "I’m just the same as I ever been, but I’m the only one who doesn’t notice it" as it canters towards its peaceful last seconds. Similar phrases crop up throughout the album, at times almost sounding like mantras you might chant in your head while reliving particularly raw memories.

Not that this is a painful or uncomfortably honest listen (though I suppose it has the potential to become one, if you were to end up associating it with certain strong memories and feelings). As I said, this album courses with ambivalence, there is no hot anger or overt melancholy. There is emotion here, certainly, but lent a certain distance from the listener by the production style and the slightly detached vocals.

As the title suggests, this is an album that’s easy to like, but not one that’s likely to take up residence in the deepest recesses of your heart. There are plenty of highlights (the confusion and yearning swept up in a torrent of propulsive drums on ‘Green Grass’, the insistent refrain of "I’m not the same" on the song of the same name, the hermetic, echoing space of final track ‘Nonesuch’) but for all its reluctant loveliness this ultimately feels like a flighty spring dalliance, rather than a record you’ll still be absorbing come December. There’s much to enjoy on Mixed Emotions, and there’s plenty of warmth. It’s just a slight shame that warmth is rarely close enough to touch.