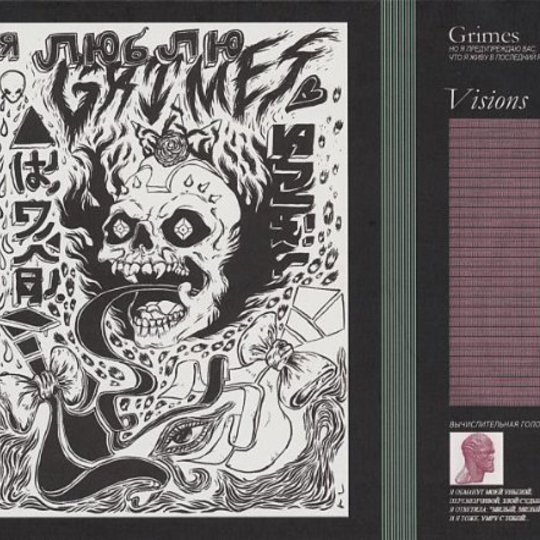 It started with a glitch.

Did Claire Boucher have some insane foresight into the critical opinion that was awaiting Grimes’ 4AD debut? There is a hell of a lot right with Visions, but the opening track ‘Infinite Love Without Fulfilment’ wraps up, rather succinctly, the stuff that’s obviously wrong with it (let’s get that out of the way first). Because, for all its charm and its ethereal wonder, Visions always stays just out of reach, scratching the surface of emotion, but never quite fixing the itch.

‘Love Without Fulfilment’ is a whore of a song, upping and leaving one minute 37 in, a stark warning not to get too attached to anything herein. The track starts out a piecemeal mess, a glitchy beat that lasts seconds before a glorious melody kicks in. Layer after layer builds; hypnotic and inviting, seductive. Then, bam! You get your groove on and Grimes is gone.

Visions is a cyclical cat-fight between style and substance and leaves you feeling needy and desperate. Guess that’s part of the charm, though, because it leaves you wanting more Grimes. Above all and aside from the frustrations, the album is a well-crafted beast, beautifully constructed. Boucher’s vocals – as long as you don’t try to grasp them too tightly – are uplifting. They deliver emotion without meaning, floating over a kaleidoscope of sounds, skimming the surface of feeling like a sketch.

The sound of Grimes is disarming. A track like ‘Skin’ is melodic and childlike, rejoicing in its own naivety, whilst ‘Oblivion’ is alluring, one of the few tracks that is possessing of serious mood and meaning. Boucher seems to skip from dance floor to mountain top with ease. The foundations of the songs seem rooted in club culture; perhaps not the most accomplished construction of beats that you will ever hear, but serving their purpose, nonetheless. But the layers of sound heaped on top recall a world where it’s probably okay to listen to Enya and have a little blow on a panpipe every now and then. It’s Modern Life, but not as we know it.

That’s the beauty of Grimes, really. Everything on Visions smells crisp and clean, doused in eco-friendly laundry detergent; there is no stench of compromise here. The artist’s vision remains intact. It should probably come with some kind of instruction manual, of course, to avoid the potential frustration of decoding that vision. Not everybody is trained in the art of letting go, after all.

That manual should read thus:

You need to learn to love this album by osmosis. Don’t try and clutch it in your hands; it’s like trying to put a dream in a display cabinet; or going to bed with a bubble in your arms. Let Visions run alongside your life. Dance to it. Sing along. Ignore the fact that half the time, you really can’t grasp what you’re supposed to be singing about. Just make the noises. Let it mean what you need it to mean.

And there you have it. Your new favourite album. Hard work, but ultimately rewarding.