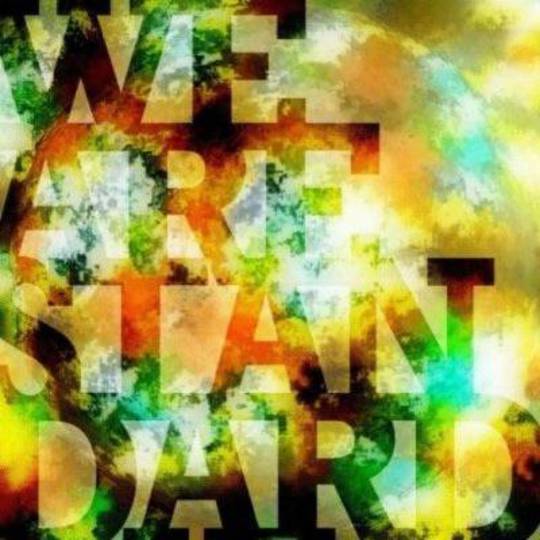 Mention Bilbao in conversation and it's quite likely the most popular topics will be centered around either The Bay Of Biscay, Spanish Civil War or its marginally successful football team. Any discussion about popular culture and its associated musicians would probably be expected to focus on artistes from other parts of the globe. And it wouldn't just be confined to the Basque region of Bilbao. Spain in general may be the hub of all things trance and Eurobeat thanks to the resorts of San Antonio and Benidorm respectively, but aside from that there's been very little else to shout about, musically.

While the folks that run gallant independent imprint Elefant may vehemently disagree, musical glimmers of hope have shone few and far between down the years. One outfit steadily making waves this past decade hail from the village of Guecho on the outskirts of Bilbao. We Are Standard have somehow managed to fuse an array of ideas and influences into a genre-transgressing mix that mirrors numerous bands and artists both past and present without specifically sounding like anyone else at all.

Having released their first EP as far back as 2004, it wasn't until their self-titled second long player saw the light of day four years later that anyone from outside their native land began to take note. Indeed even to these years, We Are Standard remained something of an unknown quantity until 2010's remix album The Golden League slowly found its way into my collection. Employing the likes of Arthur Baker, John Talabot and Cazals to rework each of We Are Standard's nine pieces of sophisticated avant garde pop, it served its purpose well as a backdoor introduction to a creative force deserving wider recognition.

So, 12 months down the line, the band have conjured up their most high profile and eagerly anticipated release to date. Featuring five brand new recordings, Great State is an EP that while unashamedly pop in every sense of the word, also manages to maintain a healthy knack for digressing off kilter every now and then when least expected. Take penultimate number 'Let's Say I'm In Love'. Delicately poised and charmingly orchestrated, its pop savvy quickly melting into a similar groove as Sonic Boom & Spectrum's 'How You Satisfy Me'. The chiming swirl of 'Love Me' that brings the EP to a close sounds like a refugee from Primal Scream's Sonic Flower Groove fed through Screamadelica-beat tinged time tunnel. It shouldn't work yet does, magnificently.

Not to jump the gun, even from the outset Great State lays its intentions loud and clear. '07:45 (Bring Me Back Home)'s humungus orchestral introduction coupled with its rousing chorus brings back memories of Pete Wylie & The Mighty Wah!'s 'Story Of The Blues'. 'The Good Ones' happy-go-lucky sentimentalism ("So much joy to share we've got nothing to prove") being further accentuated by Italo-style Acid House piano chops and a fanfare of trumpets culminating in a hip hop interlude providing its own 'Where did that come from?' moment being arguably Great State's weakest link, yet still bursting with ideas and an inventiveness that wouldn't bat an eyelid whether it succeeds or fails pretty much sums up We Are Standard's approach.

Newcomers they may not be, but We Are Standard are a breath of fresh air in a staid environment, and if Great State is anything to go by, that third album could well be the launchpad to commercial as well as critical acclaim their efforts so deserve.