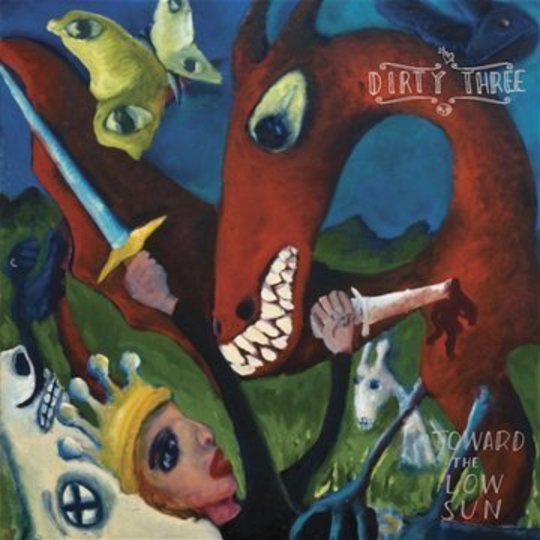 When Dirty Three play live, Warren Ellis always takes the time to tell the audience what their songs are ‘about’. It’s testament to the musicianship of the Dirty Three that this doesn’t sound like an oxymoron. Rarely are three musicians so in sync as to be so expressive without using words; arguably peerless as improvisers of instrumental intensity and beauty.

Capturing three musicians of virtuosic ability at the (continued) height of their powers, Toward The Low Sun arrives as a return to form which they never actually lost - only a ‘return’ in the sense that we’ve had to wait seven long years since we last heard from them on record. Opener ‘Furnace Skies’ feels the itch of their prolonged absence; rushing out of the speakers in a blast of ‘we’re back’ intensity; ramshackle drums spending four minutes resisting a fixed pattern, a paranoid, looping guitar run, jabs of melodic flourish from Ellis - in all, a perfect example of the return to instinctual improvisation which the band talked about being at the centre of this album’s creation.

Dirty Three have always managed to shine as three individuals working at exceptionally high levels, but simultaneously coalescing into an organic hybrid which enraptures beyond the sum of its parts. Toward The Low Sun is no exception, and it’s a credit to its production that even in stereo it sounds more like surround sound - the multi tracked violins of ‘Moon On The Land’ sweeping around you in panorama, the squeaks from Turner’s fretboard just off to your left, White’s percussion reverberating into wide open space. And the nine pieces themselves are exquisitely realised - the highly improvised feel and incidental piano of songs like ‘Sometime I Forget You’re Gone’ always sounding under full command, while the firmer structures of songs like ‘Rising Below’ never sound fixed or inevitable. One off rhythmic flourishes, slight shifts in guitar patterning and piano runs which don’t quite meet their expected phrasing paradoxically sound both spontaneous and as if that was the only way that the sounds could have unfolded. Rarely do we hear music crafted with such control while sounding so alive and responsive to the whims of its creators.

But if you’ve heard Dirty Three before, so far I’ve just told you a bunch of stuff you already know about Dirty Three. And while the soft textures and weeping fiddle of tracks like ‘Rain Song’ are as typically enchanting as anything they’ve put out to date, this record stands apart in the discography owing to its bigger picture rather than its smaller details. Uncommonly for Dirty Three, nothing on ‘Toward The Low Sun’ sticks around for longer than five minutes. Furthermore - in opposition to something like Ocean Songs in which the tracks felt like movements in an overarching suite - these tracks can juxtapose markedly different styles from track to track: the distorted bluesy freak out of ‘That Was Was’ sitting next to the album’s quaintest piano ballad, for instance. And owing to the relative brevity of these tracks, neither the individual songs nor the album as a whole boast the devastating cumulative pressure built up along the course of something like ‘Sea Above, Sky Below’ within its Ocean Songs context. Sure, tracks like ‘Rising Below’ explode into a climax of intensity as they approach the finish line - but it’s a cacophony of noise for thirty seconds at the end of a five minute standalone piece. It’s not the same as the rising swell of recurring passages and hydraulic build and release over the course of an entire hour. As involving as these pieces are, we’re never taken on a cathartic journey.

But for all of the zigzagging of instrumentation and style between these resolutely standalone pieces, it’s the incredible chemistry between its three players which ultimately allows Toward The Low Sun to hang together cohesively. It’s no damning with faint praise to say that this is largely more of the same from Dirty Three, in that ‘more of the same’ equates to near-perfect rendering of emotion through a modest array of instrumentation, all parcelled into five minute nuggets. It might lack the cinematic force afforded by extended track lengths and album-arching thematics, but Toward The Low Sun finds Dirty Three functioning at a consistently (and characteristically) high level - offering nine varied and concise pieces showcasing the gauntlet of their past successes, performed with a vitality which decimates any accusation of retread.