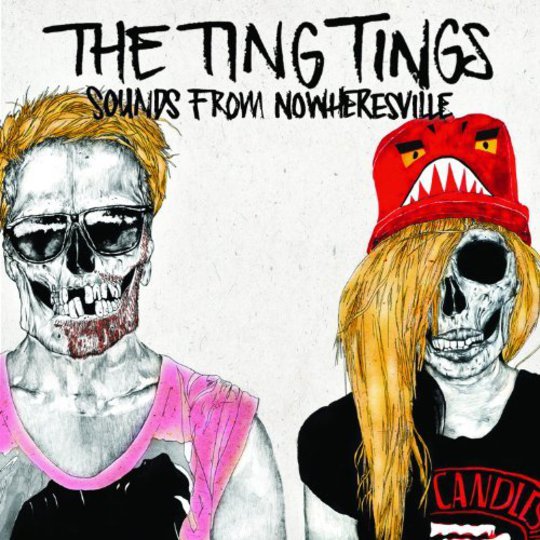 Mercifully it doesn’t really feel the case anymore, but five or so years ago there was still the very faintest whiff of that north vs. south divide hanging over Manchester’s music scene. A hangover from something far more deeply ingrained in the Eighties and solidified by Factory’s beginnings, there still remained a slight suspicion of any band who sought to break out of the M60. In the case of The Tings Tings however it wasn’t so much suspicion as total surprise at the duo’s meteoric rise through the back end of 2007, bypassing much of the local hype first before arriving apparently fully formed on Radio 1 in the daytime.

Was it too much too soon? Barely a year before and their live show possessed not so much songs as half-finished ideas that the pair simply hadn’t managed to progress upon, and though much of that made it onto the debut LP We Started Nothing that went on to sell two million copies worldwide, there was perhaps the sense that the pair knew they’d got lucky with the two huge single from that album – or maybe they were just too busy getting their rocks off in the wake of its success. Either way it’s been an aborted album and almost four years of globetrotting since they topped the UK Album Charts and – forget about the debatable merits of the past effort – that’s a long time for a pair whose music felt so resolutely throwaway at the point of its release last time round.

Sounds From Nowheresville is essentially the end result of time spent travelling the world. However whilst you can’t deny that The Ting Tings have made an effort to further their sound, any 'world' experience they’ve picked up along the way seems to have been exclusively confined to backstage toilets, VIP areas and bars. More disappointingly, despite the fact that the production glitters with the high attention-seeking compression of pop music, any explorations haven’t gone as far as finding any memorable hooks – and the ones which do stick in the mind do more so for their sheer irritable inanity.

Worst of the bunch is ‘Day To Day’ which does little more than reinforce the notion that Katie White really isn’t a good singer, her vocals sounding generally weak. When dropping into her typical fast-paced holler it doesn’t tell as much, but on slower numbers White’s limitations are notable, possessing all the vocal power of a gnat. Elsewhere ‘Hang It Up’ makes an appearance despite being almost two years old. However it’s comparatively quite strong, with the jaggedness of the guitar and clear crunch of the percussion almost compensating for another harrowing vocal appearance. ‘Give It Back’ sounds like corporate rock with all the wind squeezed out of it, just in time for repeated playback in Topman, ‘Guggenheim’ totters along with a swagger somewhat reminiscent of Blondie’s ‘Rapture’ only – as becomes often the case – lacking any form of pay-off with a mere verse – chorus – verse – chorus ad infinitum without any momentum being built. It suggests that either White and de Martino had to rush this second stab at their album, or maybe that the pair simply were struggling for ideas in the first place.

The latter accusation is tempered somewhat because on the few occasions they do show they’ve absorbed something new from their travels they actually provide some decent moments. ‘Silence’ is a big, glittering opener that anticipates a widening of sonic expanse that sadly never follows; ‘One By One,’ meanwhile, chirrups away, a glossy version of the sort of minimalism found in Berlin’s dancehalls – ok, so the similarities are fleeting at best but you can tell that things have been picked up along the way – the closing ‘In Your Life’ even makes a stab at real poignancy, with subtle string arrangements dancing around White’s voice - something you’d wouldn’t have previously the thought the hitherto bludgeoning Ting Tings would’ve have been capable of.

Overall though Sounds From Nowheresville is a mish-mash of different things, none of which are really that good. As an album that makes you worry about how long it took for the pair to come up with something that at times shows betterment but at its worst falls behind even some of the top 40 fodder of the moment. The Tings Tings' initial ascent was rapid, but whatever they were doing whilst away, it doesn’t seem like enough of it was spent really making a go at this. People said that last time and it sold a ton, yet such is the state of fluctuation at the moment you sense that if this album flops they wouldn’t be given another four years to provide another one.