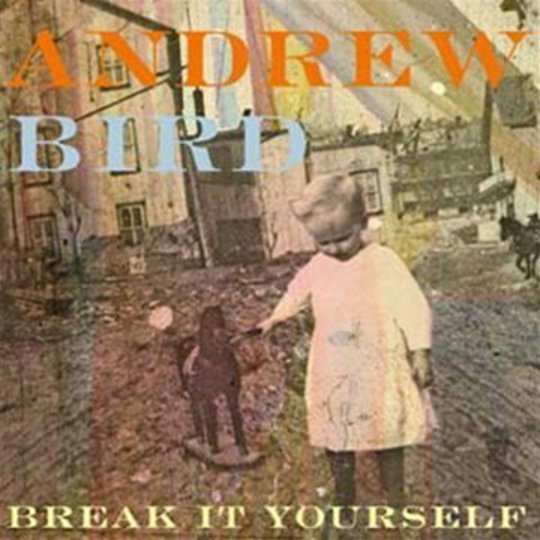 Andrew Bird has never been a man to settle for the easy option. In fact, the Illinois songsmith seems to have built a career of making even the most simple things obtuse. His admirable back catalogue is built around sweet melodies contorted into tongue-knotting, rhythmically avuncular sweeps that infuse Bird’s musical intellect with his knack for a non-conforming tunes.

Of course, this approach does not a typical mainstream career make. Bird has been toying with a breakthrough since the excellent & The Mysterious Production of Eggs dropped in 2005, yet a dedication to taking his craft into more peculiar territories has always been his undoing. It’s more likely a case of maintaining artistic integrity than deliberate self-sabotage, but there's a certain sadness in knowing the record buying majority is missing out on such a mercurial talent.

With Break It Yourself it’s perhaps a touch too hopeful to think this will change. But there is still a chance. You see, Bird’s seventh studio album finds him finally choosing linearity over his penchant for abstraction. And for the more casual listener, that means these 14 cuts are by far his most listenable. Yet, his followers should not fear: this is still, unequivocally, an Andrew Bird record and he is still stroking tenderly at fraying heart strings with his homely, honeyed tones.

Opener ‘Desperation Breeds’ quickly reveals Bird's evolution. Formed around creeping, acoustic plucks, the tracks rises into a violin-stained melody that moves with the serenity of a moonlit river. Notably, Bird’s vocals sit higher in the mix than ever before; in fact, close your eyes and he could be right beside you as he addresses “accidental pollination in this era without bees” as only he could.

Another indication of Bird’s changing persuasion is the delivery. His lyrical acrobatics and airtight metaphors have taken a back seat; in their place is the voice of a man questioning all that surrounds him. The loose limbed ‘Give It Away’ finds him yearning for a life in the sticks, sheltered away from the complications of the modern world; while on the lilting ‘Sifters’ he contemplates the strength of his own convictions, quipping: ”What if we hadn’t been born at the same time, what if you were 75 and I were nine, would I come visit you?”

It’s not exactly naked lyricism, but for Bird it represents a significant change in tack. He’s telling it as it is, relying on the power of simple melodies to see him through. And it works. ‘Danse Caribe’, in particular, is magnificently insouciant, its country strums whistling out as effortlessly as a summer breeze. ‘Eyeoneye’ is equally intoxicating, shimmering and twinkling with the sort of echoic might The Fleet Foxes could only envisage in their wildest wet dreams.

Much of Break It Yourself finds our protagonist scaling heights he’s so far resisted, combining subtle instrumental nuances with a considerable depth of emotion. And while the picturesque ‘Fatal Shores’ may trundle out like Andrew Bird-by-numbers, it's merely a minor lull that’s quickly swept away by the shiver of cymbals and guitar that greets his cry of “You’re laying mines across the shore, so my heart is ripped and torn” across the swelling, Annie Clark-accompanied ‘Lusitania’.

As swansongs go, ‘Hole In The Wall’ is as powerful as they come, gravitating around a soaring violin that rises in tandem with Bird’s slightly quivering intone. But ‘Lazy Projector’ is the album’s real gem. A shameless, lovestruck tearjerker, it gets by on a lonely cowboy whistle, weeping guitar and the cheek-moistening line: “I can’t see the sense in us breaking up at all”. It’s sad, it’s lonely, it’s Andrew Bird as we’ve never heard him before: open and exposed.

Stepping back from the throes of this umbilical soul-searching, Break It Yourself is Bird’s most consistent work to date. By playing it straight and singing it even straighter, he’s created an intensely listenable and emotional album that’s impossible not to relate to. Somewhere along the line, Andrew Bird took the easy option. He's never sounded better.