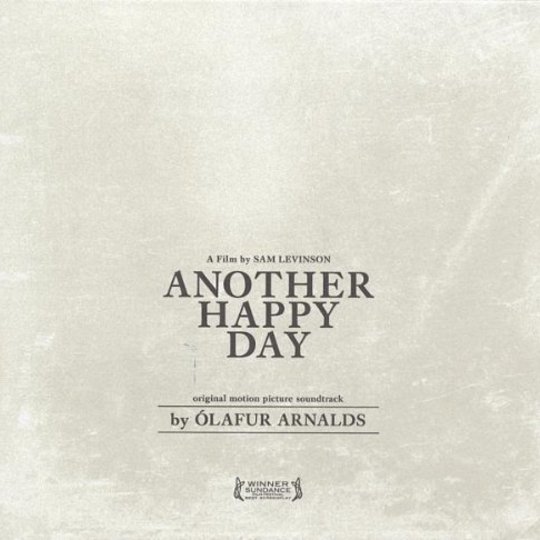 We'll not worry about the trifling issue that Another Happy Day - Ólafur Arnalds' latest in a career of delightful LPs and film scores - soundtracks a 2011 flick this writer hasn't, er, well, quite gotten round to watching. Not that this should bother fans of Óli's oeuvre: like most of the inherently elegant Erased Tapes roster, the reformed hardcore drummer gets top marks for plundering a filmic minimalism that’s so thrifty as to conjure the bleakest sepia landscapes with the sparsest ingredients, even when written primarily for personal listening.

Not entirely dissimilar from former labelmate Peter Broderick's recent Music for Confluence, musical accompaniment to a film about the Idaho murders, Another Happy Day is hardly one to take home to your grandparents. Creeping six and a half minute closer 'Everything Must Change' scratches through a jiggling gallimaufry of hobbled strings and keys, before swarming fuzz, slapping snares and high-pitched, depraved moans roundly displace any lingering sense of ease. But even when the rough winds of malaise are blowing a gale, you find shelter in something - the 25-year-old whizzkid betrays an eminent, emancipated joy in his creations, giving colour to an inscape that might easily sink under its implicit sorrow.

The appeal of 'glacial' neo-classical music - you know, the type divs are wont to label 'soundscapes' - to a furrowed-brow suburbanite has always stretched beyond its promise of gentle escapism. Though occasionally wanting for sonic complexity, Ólafur's simple, transcendent composure lends every inching phrase a delicate, intricate poignancy, displaying a free honesty in short supply throughout lives and record collections countrywide. The Icelandic composer tempers his mellifluous nature with chirping idiosyncracies, over remorseful minor tones that wallow like prison inmates trapped inside their cells during a flood. Another Happy Day creeps you out, sucks you in and gracefully spits you back again, with a renewed sense of comfortable discontent.