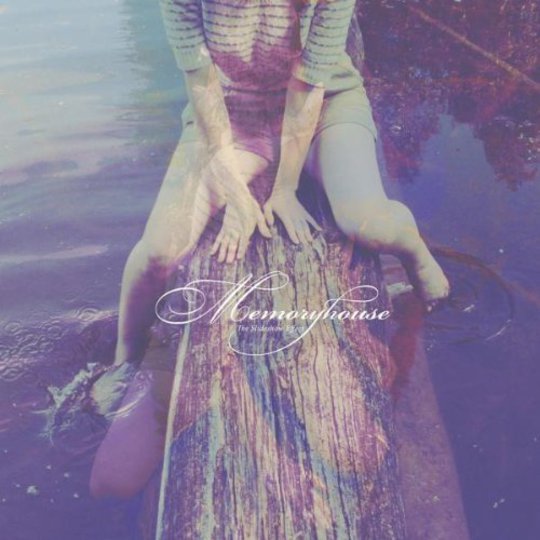 It isn’t often that one gets a chance to reference Def Leppard in a review, so let’s strike while the iron is hot. Back in the mid Eighties, the Sheffield soft rock titans were mixing an album, trying to get it just so. Eventually they had to stop, because they were wearing through the tape that they’d recorded onto. It was no longer brown, and instead had become almost translucent, with the sound quality beginning to suffer. Modern day bands have fewer technical boundaries in the quest for perfection, but the primary concern is still there. When do you stop? When is enough enough?

It is clear to me immediately that Memoryhouse have spent a serious amount of time on their first effort, without even hearing a note. The sleeve is clever and classy, and it is worthy of discussion. The front cover is a picture of a girl sitting on a log resting at the edge of a body of water, a lake perhaps. She’s dipping her feet in the water. So far, so good. It’s an interesting image, and it puts across the idea of youth, the end of innocence, and the beginning of experience. These are all themes in the album, and it’s our first sighting of water too. We’ll come back to that.

If this was all there were to the cover photo, it would have been better than satisfactory. It already has layers of depth and meaning beyond surface observation. But there is more to it than that. The photo itself is a subtle double exposure with two exposures overlaid on the same frame of film. We know that these two separate parts of the image cannot have been taken together, at the same time. This takes the viewer away from what was once a static frame, a single moment captured, and introduces them to the notion that time has passed between the first and the second time the shutter closed. Another layer of meaning. Time is not only passing, but in moving from one frame to the next, we are locked in transition with the image. Our minds are creating an imaginary space where that time has passed. The final note for the image lies in the colours, cross-processed, muted and unnatural, giving lie to the discolouration of the picture by time. The rest of the inlay offers more of the same, Denise Nouvlon’s film photography adding context and depth throughout.

So care has been taken, and it shows in the sound too. There are disparate influences, hints of trip hop in the drums of ‘Little Expressionless Animals’, and the looming, ever-loving ghost of Zooey Deschanel in the vocals. Isn’t it odd how she’s become the default reference point for soft indie girl vocals? And despite traces of Arcade Fire in the arrangements of Evan Abeele, hints of Built to Spill in the guitars of the sure-fire pop single ‘The Kids Were Wrong’, there isn’t enough of what Memoryhouse are in themselves to really separate them from all the other dream pop bands you’ve never heard. That doesn’t stop them from trying though. In recording terms, The Slideshow Effect is a masterclass. Nothing seems out of place, from any angle. It’s the attention to detail, little touches that cut through the mix, perfect acoustic tone to the guitars. It’s the sort of finish that speaks to a sensational amount of effort. But there are a lot of technically excellent recordings out there. How do Memoryhouse make theirs different?

Strong lyrical themes are one way they stand out from the pack. Here thunderstorms and floods appear, mirrors of the tumult of young feelings recaptured in the words of the songs. But above all, water is the key motif, a catch-all signifier to show heightened awareness of emotion. Water becomes a thread between songs, a way for characters in one song to reappear in another, and their interactions are mediated by it. In ‘Heirloom’ the singer warns another against “drowning in the flood”, and in ‘Bonfire’ we’re gifted the image of a photograph floating on a pool. Water recurs elsewhere, so often in fact that each reappearance seems almost overdone by the albums final close.

All in, it’s still a worthwhile listen. They’re a strong band musically, and The Slideshow Effect is a good, well put together piece of work which creeps up on you slowly. They’re by no means the finished article, but as this is album one, why should they be? Some bands don’t spend their lives working towards getting back to how their perfect first album was. When Memoryhouse step away from their idea of what a record should sound like and find their own voice, they’ll be a lot closer to perfection than most bands will ever get.