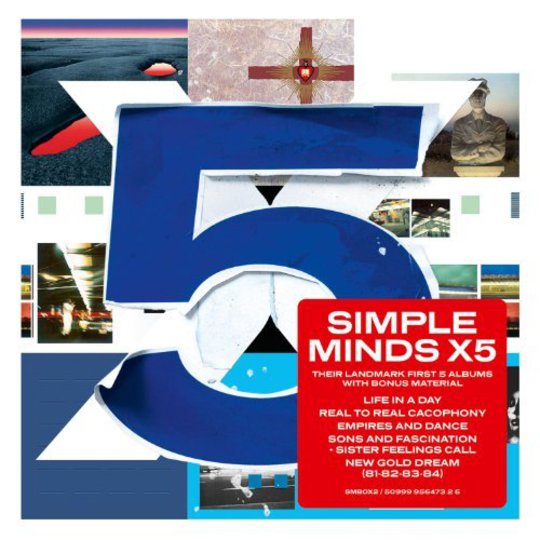 Ten years ago, I’d probably have had to preface this review with some pugnacious assertion along the lines of ‘yes, I know Simple Minds are awful these days, but they actually used to be really good!!!’. But it’s 2012 now, and Jim Kerr and co’s empire has long since fallen into rust, their legacy almost shocking negligible. Sixty million album sales down the line, all the band really have to show for themselves is the continued ubiquity of the song ‘Don’t You (Forget About Me)’ – which they didn’t actually write - and enough of a once vast fanbase to ensure they can still play the Wolverhampton Civic Halls of this world.

As a teen in the mid-Nineties Simple Minds already seemed pretty faded to me: people my age only thought they were uncool because folks a decade our senior hated them so much; it’s not like you ever heard their songs anywhere.

So there’s no real reason why anybody under the age of 30 would have any sort of enmity towards them at all. Indeed, the shadow cast by their ‘big’ albums - Sparkle in the Rain, One Upon a Time, Street Fighting Years - has diminished to such a point that their excellent earlier records have lost most of the taint by association; the atmospheric electronica of those albums is even starting to become a moderately hip reference point.

This has clearly not escaped singer Kerr and co-founder guitarist Charlie Burchill, who have just gathered together the various folk who constitute Simple Minds these days for an slightly forced but not unpleasing sounding tour dubbed 5x5, in which the band will each night play five songs from their first five albums. And by way of accompaniment, here’s X5, a boxed set compiling said records that could justifiably have just been called Now You Don’t Need to Bother with the Rest of Our Stuff.

To get some basic gripes out of the way: X5 is billed as being remastered, which it is, but it’s just the 2002/3 remasters that were on the market already. The bonus tracks included are newly remastered, but the band were not prolific creators of extra material and though there are a couple of solid songs, there’s nothing worth the price of admission. That said, the boxed set is retailing for £14.99 on Amazon, which is a ridiculous price considering it contains three of the best albums of the Eighties.

The band’s debut Life in a Day is not one of the best albums of the Eighties. A lot of this is to do with the fact it came out in 1979, but even so, it’s the real odd one out here, a Bowie and Cars-indebted chunk of new wave naivety that’s overshadowed by a hundred other records from the period. Yet it retains a skronking freshness and youthful vitality (the band were teenagers when they recorded it) and if Simple Minds didn’t exactly seem to have much of a gameplan at this stage, they made an invigorating, tuneful racket. Playing five tracks a night on their tour purely on grounds of an aesthetic conceit seems like a pretty perverse gesture, but hey.

A mere seven months later, in November '79, Simple Minds released Real to Real Cacophony, an album that pretty much sounds like it was made by a different band. Bowie remains a plausible influence - albeit the eclectic, international Bowie of that May’s Lodger - but its defining moment comes in the form of opener ‘Real to Real’, a primitively gorgeous electronic lullaby, twinkling Radiophonic Workshop synths glinting about Brian McGee’s wonkily mechanical percussion, with Kerr ditching his awkward vibrato for a hugely effective, Kraftwerk-inspired monotone. It’s this oddball’s album’s strongest moment and the most overtly electronic one; fortunately the band realised this, and it forms the blueprint for their following three (and best) albums.

Empires and Dance came out less than a year and half after Simple Minds’ debut, and is of almost exponentially greater quality. The pounding disco of the opening ‘I Travel’ is the ‘big’ moment, but there’s not a weak link on a record of hard, icy electronic earworms. The first side run of ‘Today I Died Again’, ‘Celebrate’ and ‘This Fear of Gods’ is astonishing, freezing new wave grandeur matched seamlessly to furious post-disco beats; and on the weirder second side, the yearning instrumental ‘Kant-Kino’ is heart-meltingly gorgeous.

Three decades on, Empires and Dance is probably the hippest and most influential of these records, but I'd cheerily call Sons and Fascination/Sister Feelings Call at least its equal. Originally Sister Feelings… was a bonus disc to Sons… and they come packaged separately here, but really they’re best listened to as one huge, dreamy expanse. Steve Hillage’s production is more ramshackle and winsome than John Leckie’s precise work on Empires…, and the band are in softer, more contemplative mood, tinkering with electronic sounds for the sheer joy of doing so, in a manner that would not occur again. The coldly pulsing ‘In Trance as Mission’ and ‘Sweat in Bullet’ could have fitted onto the previous record, but there are far more textures here, like the surging, weird euphoria of ’70 Cities as Love Brings the Fall’, the glittering European sweep of ‘Theme from Great Cities’, the cool nocturnal shimmer of ‘This Earth You Walk Upon’, the New Order-ish electro pop of ‘Love Song’ and ‘The American’. It is an immersive, exotic, thoroughly intoxicating record.

Pompy, polished and platinum-selling, the songs from New Gold Dream (81-82-83-84) have remained a fixture of Simple Minds’ live shows throughout their career and are arguably an odd fit on what’s notionally a rarities tour. Probably the official rationale is that NGD is their last fully electronic album; obviously the real reason is that it’s their last good album.

Peter Walsh’s production is clean, booming and massive, Kerr’s baritone is outrageously portentous, the lyrics are more or less meaningless and little of the grit of sense of febrile musical discovery that defined its predecessors. And yet on New Gold Dream all of these qualities come across as positives: the exotic ramparts of synth, the jewelled flights of electrical melody; perhaps above all a certain magnificent aloofness that made the record cryptic and enticing rather than overblown and obvious. The overwhelming, gilded surge of the title track is the obvious crowning moment, but from the yearning, layered haze of opener ‘Someone Somewhere in Summertime’ through to the unsettling, paranoid finale ‘King is White and in the Crowd’, this is a nigh on immaculate record, eking out its own brooding territory someplace between New Order’s Movement and U2’s The Unforgettable Fire.

I wonder what might have happened to the band if, like U2, Simple Minds had next fallen under the tutelage of Brian Eno or Daniel Lanois. Instead, by 1985, they’d be releasing the dreadful stadium rock opus Once Upon a Time, a record produced by the nightmare double act of Jimmy Iovine and Bob Clearmountain.

It’s not totally fanciful to compare the combination of rapid musical evolution and prodigious output that characterised the band’s early years to that of The Beatles or Bowie – Jim Kerr was only 23 when New Gold Dream was released. The difference, of course, is that success ruined Simple Minds, with an abruptness almost unparalleled in popular music. It’s best to remember them this way.