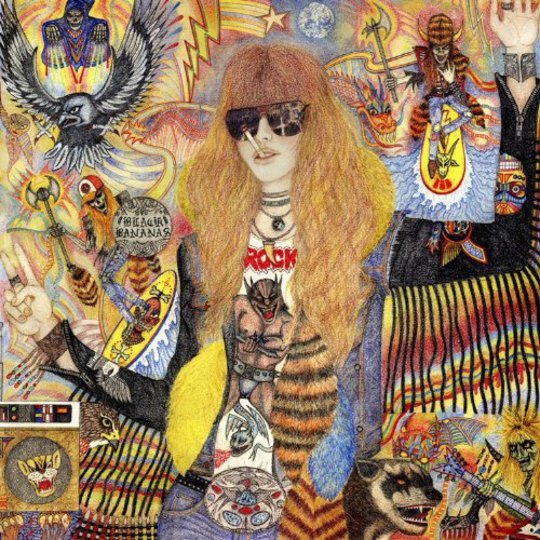 Rock‘n’roll isn’t dead. At least not yet:right now it resembles an elderly man in a care home, stuttering around in his piss stained jogging bottoms, talking to himself about the good old days, as his false teeth rattle a Charlie Watts-esque drumroll in frothy decaying gums.

I was watching an interview on YouTube that Nardwuar the Human Serviette had conducted recently with Henry Rollins, and gosh darn it, even my hero Hank is getting long in the tooth. There is a point to me mentioning this, but I shall get to that later.

First, let’s talk about Black Bananas. Allow me to digress into observational whimsy for a brief moment. I really struggle to eat a banana that’s skin has come to resemble a malnourished leopard, any blemish and I refuse to even consider peeling back the skin and taking a bite.

This is an example of what I shall be touching upon for the rest of this review - whimsy. If we look at Jennifer Herrema, the focal point of Black Bananas, then we will know that she has featured in several influential bands that have been deeply rooted in primal rock, the obvious being the underrated Royal Trux. Her style has always bordered on pastiche, but often it’s been a case of fanatical imitation. She and her respective bandmates have proudly been honoring their heroes and heroines, rock gods that matter less now than ever.

‘Trouble’, the second track on this album, contains an important lyric “It’s all been done, just look around”. On such a knowingly nostalgic record it is difficult what to make of Rad Times Xpress IV. There are bits shamelessly pinched from all your favourite re-issued classic rock albums, all your dad’s favourite classic rock albums and all your granddad’s favourite albums. In many ways it’s a hip joke of an album. That’s what makes it a tricky thing to review. Because it is ever so easy to get the hatchet out and start hacking apart the meaty riffs that puff this album’s pigeon chest out. It’s easier still to kick the pigeon and watch the Gregg’s sausage roll crumbs fly from its beak.

It might be an American thing, appreciating sweet jams. Those ol’ familiar licks, the faux cool poses, the sleaze of it all. Seventies rock was cool, it got jacked-up when the last good batch of heroin was cooked. Black Bananas have attempted to incorporate mystic new wave casio wank beats into the sloppy joe of guitar eroticism, (on the strange trilogy of ‘RTX Go-Go’, ‘Do It’ and ‘Rad Times’) it sounds a bit like something Prince used to do back in the Eighties. I suppose the intention was to cook up something different, but when Black Bananas resort back to the tried and tested soon after, it appears that the band weren’t confident enough to commit to the experiment. I wanted so badly for Herrema to go all Bobby Conn and present the bizarre unexpected, but after a brief diversion that pricked up the ears, normal service resumed.

When we think of straight-up tribute rock, a category where Black Bananas place themselves, there was once a time when a band like The Darkness was genuinely exciting... for some people. Conceivably this could happen again since classic rock re-interpretations can work under the right circumstances; such as when a campy American TV show comes along and reintroduces us to Journey or when some sap croons ‘Every Rose Has Its Thorn’ on the X Factor. Rad Times Xpress IV is a fun rock album, in the sense that it is an unabashed sound of a bunch of people playing the kind of music they love. But who wants to hear this? How can you even market this to a new audience? Why doesn’t it even sound convincing?

Drag City is obviously deeply tied to Herrema through her early days with Royal Trux, and supporting any of her projects is understandable, if nothing else out of love and loyalty. The trouble is we critics are currently picking at the corpse of rock‘n’roll, deliberately poking at it in the hope that it resurrects itself once again. We don’t want a rock band in 2012 to necessarily reinvent the wheel but we need a certain kind of inventiveness. Sort of like what The Monks did in ’65, and that was when rock was vibrant and chug chugging along.

Going back to that Henry Rollins interview, Rollins is never an easy interviewee, and often appears bitter and disgruntled, even in his prime. Though today, aside from the pronounced crow’s feet that scarred his battle hardened face, and his increasingly greying hair, as a musical force he is pretty much impotent - like rock‘n’roll he is nearing the final curtain. When he talked to Nardwuar about music, he seemed to do so begrudgingly, because it appeared old father time had caught up with him and sucked out his fire, the passion wasn’t there.

Rock‘n’roll was once about passion. It was the epitome of spirit, attitude and fun. It’s not just enough to portray this through borrowed riffs, and on stage whilst looking like the New York Dolls. Black Bananas in this sense are relevant only to themselves. It's fine that they are enjoying what they do, but for new ears, there’s nothing new here.