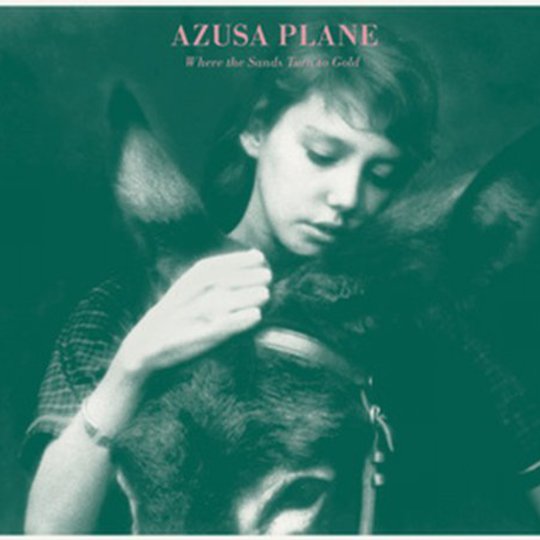 Azusa Plane may be the ultimate example of a Discogs clickthrough band. That is to say, once you start peering into the recesses of the project’s discography – five albums and almost 20 singles over six hectic years – at every turn you encounter a signpost to something new, weird and underground by absolutely any standards. A one-man ensemble on record, namely Pennsylvanian Jason DiEmilio, most of the bedroom-based labels who released Azusa Plane product are defunct or dormant; the outfits with whom AP shared 7-inch and compilation space largely forgotten by everyone but the most fanatical cataloguers of Nineties drone-rock. As fun as this treasure hunting might be, though, it’s shadowed by sadness. Where The Sounds Turn To Gold, a laudably comprehensive overview of Azusa Plane’s catalogue, is released just over five years after DiEmilio killed himself; his ability to make music had been cast asunder by a combination of hyperacusis and tinnitus, and this eventually took over his daily life.

For many years, DiEmilio turned the drone scene – experimental, subterranean, space-obsessed, worldwide – into the foundation for much of his lifestyle, forging contacts with scores of likeminded figures. The resulting friendships form part of his legacy, and many cohorts offer memories in the 84-page booklet that comes with Where The Sounds Turn To Gold; although his illness had made him a recluse late in life, it’s evident that his death was a wrench for those who’d encountered him. The rest of his legacy, of course, lives within the music in this retrospective: 24 songs across two CDs, plus a DVD containing live footage and more than five dozen MP3 tracks. It’s as overwhelming as the layers of rumble, throb and hum which flood from Azusa Plane’s guitars.

I should state, at this point, that I’m approaching Where The Sounds… having never really listened to Azusa Plane. I didn’t dive in entirely blind: this scene fascinated me in my late teens, and my first encounters with proverbial ‘related artists’ like Flying Saucer Attack, Windy & Carl, Labradford, Roy Montgomery and Bardo Pond were all formative in their own small way. This being pre-filesharing, and pre-me having a regular income, AP remained one of countless esoteric names in the ether. As it transpires, DiEmilio’s style is highly personalised, simultaneously free of spirit and born of intense self-tuition. His notion of ‘avant-garde’ had little recourse to theory, as typified by figures like Tony Conrad or La Monte Young, but he was committed to testing the possibilities of what could be done with an electric guitar. Bedroom recording techniques are reclaimed as a weapon: despite titling songs in tribute to Sebadoh, The Mountain Goats and Calvin Johnson, Azusa Plane wasn’t a ‘lo-fi’ project in the genre-bound sense, but takes delight in setting reverb to stun, plugging into a four-track and seeing how the little bastard copes with the overload.

On ‘Meander’, from AP’s 1995 debut single, repeated waves of echoey feedback wash over you until you feel submerged, but the takeaway is still pure and ecclesiastical. (This semi-paradox is repeated for ‘A Magnetic Breakthrough’ and ‘This Is Not Spacerock’.) DiEmilio is inclined to hint, albeit abstractly, at heavy rock muscularity: ‘Tokyo Guitar Flashback’s title may or may not pay tribute to Japanese acts like Mainliner, but is a splendid slab of deconstructed sludge. And if your immediate go-to point at the mention of drone music is Sunn O))), confront the unholy bottom end of ‘You Said That I Could Bring My Guitar’, which gurgles below a freeform, bell-like percussive effect. Reputedly, Azusa Plane on record was slight and shy compared to Azusa Plane as a live trio; the 30 minutes of 1998 camcorder footage unearthed here is too ropey to fully confirm or deny, although the addition of a drummer explicitly alters the dynamic (and the live audio selections suggest a climactic power in the flesh).

There is a great deal of beauty in this music, some of it close to an ‘accepted’ standard for that abused noun. As a guitar player, DiEmilio – a huge Smiths fan, hence this release’s artwork – would occasionally use a fey strum or jangle to underpin some moving, celestial vibration. This is done especially effectively, and unusually quietly, on both sides of the ‘Cheltenham’ 10-inch (named in reference to the home town of Ochre Records, who released it, and who may have lost the master tapes, given that this sounds like it’s been recorded from the vinyl). By all accounts, there is also anger, gloom and salvation: the guitarist suffered from depression long before his hearing problems took hold, and spoke of music serving as his escape route. We the listeners, at least ones as detached from the source as this reviewer, can’t do much more than project our curiosity onto these exclusively wordless songs. However, amidst a spacerock subculture whose aesthetic often spilled over into precious pastoral whimsy, you can see why a twentysomething solo artist might want to venture into scorching wind-tunnel noise areas, or title a track ‘She Was Into S&M And Bible Studies. Not Everyone’s Cup Of Tea, She Would Admit To Me. Her Cup Of Tea, She Would Admit To No One.’

It’s unlikely you’ll find the legacy of Azusa Plane in anything happening in 2012, at least not by merely listening to records. There are still plenty of underground drone ensembles, some (like Emeralds) even critically acclaimed on a wider scale, but you’d be reaching to try and make a solid connection. Jason DiEmilio’s playing had its own sonic tics which make the majority of things on here sound genuinely individual – not everything, there are moments of generic delay pedal reliance which could have been by any second division spacecases of the time. When absorbed as part of an epic, distraction-free listen, occasional shortfalls will seem like small beer in the greater context of the package. And a hefty package it is, too: Vinita of Rocket Girl’s efforts to honour her friend’s memory deserves applause.