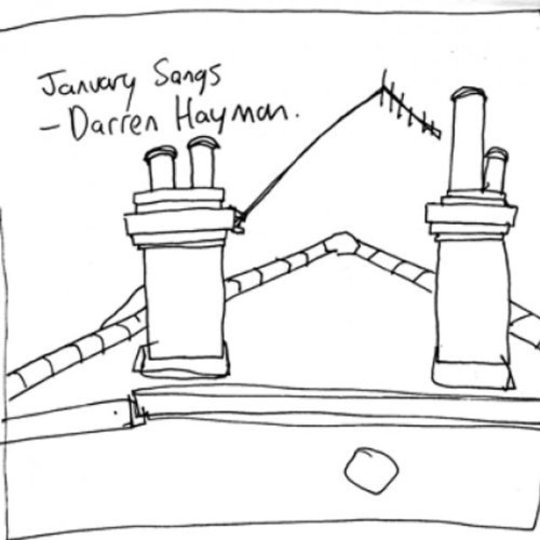 About five years ago when I was living in Leeds I remember picking up a flyer for a club night called ‘Comfort Zone’. The tagline was ‘an incredibly narrow range (of music) played by a number of twentysomething eternal students who are too damn obstinate to let go’. Unsurprisingly it was an indie night, and top of the list of bands played was Darren Hayman’s former band Hefner. But whilst Hefner may not have been musically ground-breaking, they nonetheless possessed a great deal of charm, playing spikey indie pop that packed a punch, with smart lyrics that could make you pogo up and down to the black comedy of heartache and frustration. Since Hefner disbanded in 2002, Hayman has continued turning the futility of life into dark indie pop songs as a solo artist.

January Songs was Darren Hayman’s ambitious 2011 project. During the first month of last year he set himself the challenge of writing a song for every day of the month and recording it on that day. He kept a record of this process via webcasts on the internet. The entire album was, and still is, available to listen to free online along with accompanying videos. The project clocks in at over three hours and is now to be released physically on limited edition CD format as an ‘anniversary edition’.

By Hayman’s own admission January Songs is not his best work. Evidently the pressure and time-constrictions inherent in the project would make producing a work of greatness pretty near to impossible. Hayman didn’t allow himself time for revision or editing and it is one long album. However the range of songs is pretty impressive, from stompy indie anthems such as album opener ‘It Was Over’, which recalls being dumped and abandoned by a lady friend, to the spoken word sleazy saxophone lament of ‘The Return’, which tells the tale of a relationship failing and idealism being crushed. Can we see a theme developing here? It can’t be said that there is ‘something for everyone’ on this record but there is probably something for most fans of twee indiepop.

‘Nothing At All’ is an obvious stand-out track. It’s recorded live in London at the Lexington with an audience singing along anthemically to lyrics about life’s struggles. The chorus is a super lo-fi version of get-sweaty-and-connect-with-your-fellow-man-rock and fun it is too. Tracks such as ‘Esplanade Drive’, ‘Bad Technology’ and ‘I Know I Fucked Up’ (sung and co-written by Allo Darling’s Elizabeth Morris) are more subtle spikey pondering laments which render feelings of isolation, especially in the case of the latter, and could bring one’s serotonin levels right down. But who needs serotonin anyway?
I admit that by song 25 I was starting to get a little fatigued, particularly as Hayman’s subject matter is relentlessly bleak and whimsical. But under the circumstances Hayman did pretty well, and if angsty indie boys are your bag then there will certainly be some tracks amongst the 30 day project to rouse your interests or make you feel a deep sense of remorse for everything you messed up. Or both.